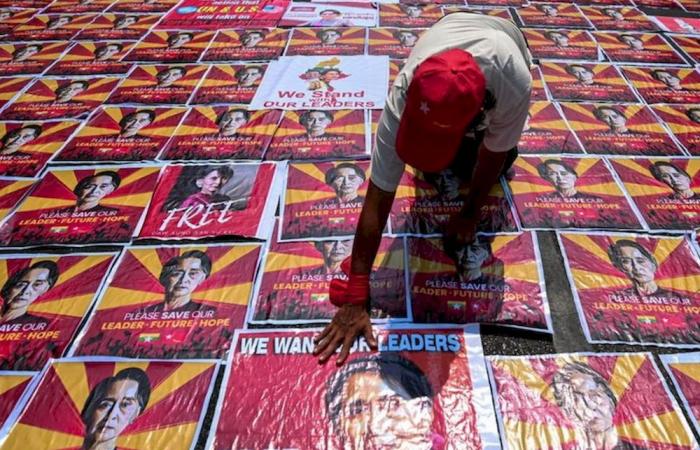 FEB 24 — Myanmar’s military-appointed foreign minister flew into Thailand today for talks with two of his neighbours as they intensified efforts to resolve a crisis over Myanmar’s coup, despite the scepticism of its pro-democracy camp.

The minister, Wunna Maung Lwin, made the first foreign trip by a member of the new military government as opponents of the Feb. 1 coup again took to the streets in Myanmar.

The army seized power after alleging fraud in a Nov. 8 election swept by Aung San Suu Kyi’s National League for Democracy (NLD), detaining her and much of the party leadership. The electoral commission dismissed the fraud complaints.

Indonesia has taken the lead within the Association of South East Asian Nations (Asean) in efforts to steer a path out of the crisis and its foreign minister, Retno Marsudi, arrived in Bangkok today and met Wunna Maung Lwin and Thai Foreign Minister Don Pramudwinai.

The Indonesian effort has raised suspicion among Myanmar activists who fear dealing with the junta would confer legitimacy on it and its bid to scrap the November election. They insist the result should stand.

Dozens of protesters gathered outside the Thai embassy in the main city of Yangon with signs reading: “Respect our vote” and “We voted NLD”.

“Our foreign minister is Aung San Suu Kyi,” the protesters chanted, referring to the post she held in the government she led after winning a 2015 election in a landslide.

In Bangkok, Thai prime minister Prayuth, a former army chief who seized power in a 2014 coup, declined to confirm to reporters he had met the Myanmar minister.

“Some things are not official,” he said. “We offer support as an Asean country that has to cooperate and offer well-wishes that everything works out smoothly.”

This week has seen huge rallies and a general strike to denounce the coup and demand Suu Kyi’s release despite a warning from authorities that confrontation could get people killed.

A Reuters report this week fanned suspicion about Indonesia’s approach after it cited sources as saying Indonesia was proposing that Asean members send monitors to ensure the generals stick to their promise of fair, new elections.

The military has not given a time frame for a new election but it imposed a one-year state of emergency when it seized power so it would likely be after that.

“This is not the ideal time to conduct a visit,” ministry spokesman Teuku Faizasyah told a briefing in Jakarta.

The Myanmar-based Future Nation Alliance activist group, said earlier in a statement a visit by Retno would be “tantamount to recognising the military junta”.

Protesters in the second city of Mandalay marched today in support of the ousted parliamentarians.

A procession of elephants also marched in Mandalay.

As well as the political crisis, the coup is compounding Myanmar’s economic woes.

Military chief General Min Aung Hlaing has called for state spending and imports to be cut and exports increased to revive what he called an ailing economy.

He did not link the protests to economic problems but said the authorities were following a democratic path in dealing with them and police were using minimal force, such as rubber bullets, state media reported.

Security forces have shown more restraint compared with earlier crackdowns against people who had pushed for democracy during almost half a century of direct military rule.

Even so, three protesters have been shot and killed. The army has said one policeman was killed.

The crisis has restored Myanmar’s reputation as the problem member of the 10-country Asean and the diplomatic scramble by its neighbours comes as wider international concern is growing.

China has traditionally taken a softer line as have Asean neighbours.

But the Group of Seven (G7) rich nations yesterday condemned intimidation and oppression of those opposing the coup.

The United States imposed sanctions on two more members of the junta and warned it could take more action, while the European Union has said it was considering sanctions that would target businesses owned by the army. — Reuters

These were the details of the news Neighbours’ efforts to help end Myanmar crisis raise suspicion among protesters for this day. We hope that we have succeeded by giving you the full details and information. To follow all our news, you can subscribe to the alerts system or to one of our different systems to provide you with all that is new.