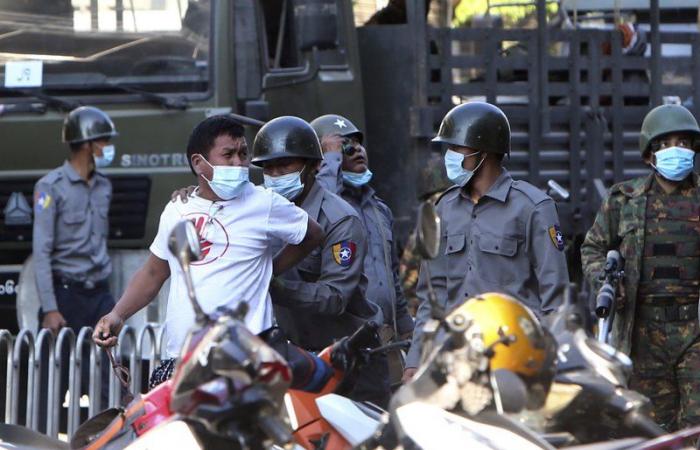 Mohamed Nass - Cairo - JAKARTA, Indonesia (AP) — Whether taken from their homes in the middle of the night or grabbed off the streets during protests, hundreds of people have been arrested in the weeks since Myanmar’s military coup, leading human rights groups and experts to fear a sizable expansion in the number of political prisoners in the country.

As of Tuesday, some 696 people — including monks, writers, activists, politicians and others — had been arrested in relation to the coup, according to the Assistance Association for Political Prisoners, or AAPP, a Myanmar-based organization.

“The National League for Democracy was comfortable leaving repressive laws on the books because in some instances they felt they might be able to take advantage of those laws themselves,” said Ronan Lee, a visiting scholar at Queen Mary University of London’s International State Crime Initiative.

“It’s now clear that some of those laws are now going to be weaponized against democracy campaigners in a way that maybe the National League for Democracy didn’t foresee,” Lee said.

While the military continues to use and amend old laws to crack down on dissidents, new laws are being introduced as well, signaling the military’s intent to continue arresting protesters.

The hundreds arrested since the coup join the already hundreds of political prisoners in the country who were imprisoned both under the previous junta and the National League for Democracy, or NLD.

During the NLD’s rule, journalists, critics of the military and the government, and others were charged under colonial-era laws. According to the AAPP, Myanmar had over 700 political prisoners as of Jan. 31, with hundreds being charged during the NLD’s time in power.

Many of the repressive laws used against dissidents date back to the country’s colonial era.

After over 120 years of British colonial rule, Myanmar, then called Burma, became an independent republic in 1948. Though no longer a British territory, the country retained many of its colonial-era laws, which were “designed in nature to be repressive and silence political opponents,” said Nick Cheeseman, a fellow at the Department of Political and Social Change at Australian National University.

In 1962, the military took control of the country through a coup, and it remained under junta rule for decades. Under the junta, people were regularly imprisoned for speaking out against the military. Those arrested were often sent to prison for years, and torture — including beatings, waterboarding, and deprivation of food and sleep — was commonplace, according to the AAPP. Suu Kyi was kept under house arrest for 15 years over a 21-year period during this time.

Before democratic reforms eventually took place — a period during which Suu Kyi was released from house arrest, her political party agreed to participate in 2012 by-elections and press censorship was softened — Amnesty International estimated that Myanmar had more than 1,000 political prisoners, calling it “one of the highest of such populations worldwide.”

In the years following Suu Kyi’s 2010 release from house arrest, a prisoner amnesty led to the freeing of thousands of inmates, including some 200 political prisoners, while others remained incarcerated.

For many observers, this signaled hope for further reforms, a view bolstered when Suu Kyi’s party took power following a landslide victory in 2015 elections.

But hope quickly dissipated in the years that followed, as repressive laws widely stayed on the books and political prisoners remained without official recognition.

The lack of repealing hard criminal codes left some free-speech and other activist groups upset in Myanmar, but “really didn’t impact how many in the West interacted with Aung San Suu Kyi” or her government, said Lee, the scholar.

“What the military is trying to do is use the laws to add some legitimacy to their illegitimate grab for power and the NLD gave them an opportunity to do that by leaving old laws intact,” Lee said. “But there’s also no question that if these laws didn’t work for the military, they’d still find other ways of arresting people.”

Since this month’s coup, the military has also amended old penal codes and proposed new laws that experts say could be used as further tools to crack down on dissidents.

For example, amendments made on Feb. 14 to the country’s Penal Code sections on High Treason state that people can be sentenced to “up to 20 years for planning to hinder the success of defense or law enforcement.”

A controversial proposed cybersecurity law demands the elimination of online comments considered to be misinformation or disinformation that might cause “hate” or disrupt stability, and any comment that might violate any existing law. Those who are deemed to break the law can be sentenced to up to three years in prison.

The legal changes “are a textbook example of a military attempting to suppress dissent,” said Bo Kyi, a former political prisoner and founder of the AAPP. “The wording of these amendments exposes quite literally anyone to imprisonment.”

With the continued crackdown on anti-coup protesters — including arrests by plainclothes police in the middle of the night — prominent pro-democracy activists told The Associated Press that they have begun to stay in safehouses to avoid arrest. Others who have been arrested have not had contact with their families, and their locations remain unknown.

“Conditions (for prisoners) is something that we’re really worried about,” said Maung, the Human Rights Watch researcher. “We are expecting the worst, which is that people are being mistreated and possibly even tortured, because that’s what used to happen.”

Image: FILE – In this Monday, Feb. 15, 2021, file photo, a man is held by police during a crackdown on anti-coup protesters holding a rally in front of the Myanmar Economic Bank in Mandalay, Myanmar. As arrests of dissidents continue during anti-coup protests across Myanmar, experts are concerned that a new generation of political prisoners will begin to fill the country’s prisons. (AP Photo, File)

These were the details of the news Experts fear fresh wave of political prisoners in Myanmar for this day. We hope that we have succeeded by giving you the full details and information. To follow all our news, you can subscribe to the alerts system or to one of our different systems to provide you with all that is new.

PREV Free at last to hug and party: UK reopens for business
NEXT India's lauds Gulf assistance in fighting COVID-19