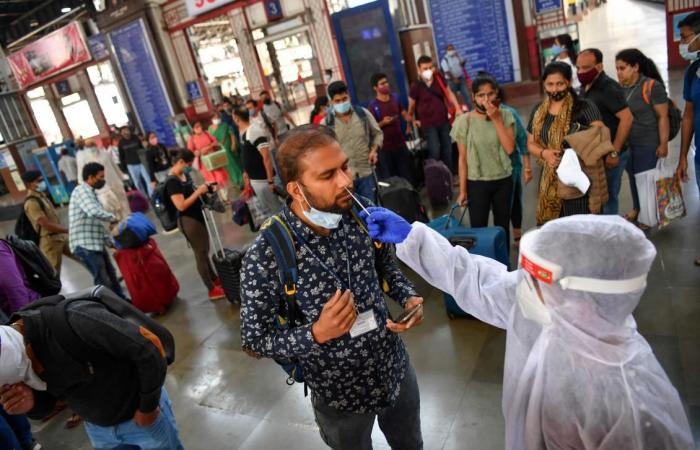 Jeddah - Yasmine El Tohamy - NEW DELHI: India’s financial capital Mumbai imposed fresh coronavirus restrictions on Monday as a rise in cases in the worst-affected region sparked fears of a new wave, while the country’s vast inoculation drive fell behind schedule.
All religious, social and political gatherings are banned in the city and the surrounding western state of Maharashtra, home to 110 million people, after infections spiked to levels last seen in October.
Maharashtra chief minister Uddhav Thackeray said he was “worried about the severity of a second wave if it hits the state,” which has recorded nearly 52,000 deaths since the pandemic began.
“The simple mantra is wear a mask, follow discipline and avoid lockdown. We will review the situation again in the next eight days and decide on a lockdown,” Thackeray said in a live television address on Sunday.
Elsewhere in the state there were tighter restrictions.
India’s tough nationwide lockdown imposed in March has largely been relaxed, with even its famously lavish weddings and cricket crowds returning, albeit with numbers capped.
Daily new cases peaked at more than 97,000 in September but have been falling sharply, coming in at under 9,000 a day earlier this month.
But the past two weeks have seen an uptick, with around 14,000 new infections on Monday, the biggest rise coming in Maharashtra, taking India’s total past 11 million since the pandemic began with 156,000 deaths.
In the capital New Delhi, which on Monday recorded just 46 new infections and two deaths in the crowded megacity of 20 million, locals said they were still concerned.
“If we look worldwide, in places where they let the guard down cases have increased again,” said 44-year-old sales and marketing professional Gaurav Kumar.
“We cannot afford to take things lightly, given our population size and recent history of cases.”
Anand Krishnan, a professor at the AIIMS hospital in Delhi, said it was too soon to say whether there would be a new wave, but he said the “primary focus” should be on sticking to precautions like masks, and vaccines.
India’s huge inoculation drive is lagging behind schedule as the world’s biggest vaccine maker said it had been told to prioritize domestic supplies ahead of exports to other poor countries.
India began vaccinating health care and other frontline workers from mid-January, aiming to inoculate 300 million people — or 600 million shots in a two-dose regime — by July.
But at the current pace, with 11.1 million shots given as of Monday, that will take several years.
The head of India’s Serum Institute, which other poor countries are relying on for supplies of the AstraZeneca vaccine, said on Sunday it had been “directed to prioritize the huge needs of India.”
Adar Poonawalla did not clarify whether these were new instructions or if they were related to the slow pace of India’s vaccine rollout. A spokesperson declined to comment further.

These were the details of the news Mumbai imposes fresh coronavirus restrictions after spike in cases for this day. We hope that we have succeeded by giving you the full details and information. To follow all our news, you can subscribe to the alerts system or to one of our different systems to provide you with all that is new.