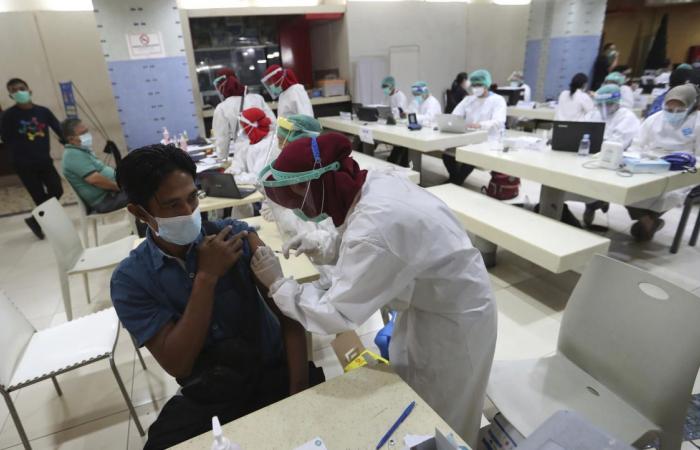 Thank you for reading the news about Message of hope: Indonesian WhatsApp groups helping tackle pandemic and now with the details

Jeddah - Yasmine El Tohamy - JAKARTA: Locals in Yogyakarta, a province of Indonesia’s Java, have turned to online chat rooms on WhatsApp to cope with the challenges of the coronavirus pandemic and provide solutions.
The first group was set up in March last year as the country’s first infections were reported.
Today, the movement has multiplied into 14 groups to address pandemic-related issues. One of the chat rooms helped communities set up shelters and neighborhood units to isolate coronavirus patients after hospitals in Yogyakarta’s Bantul district became overloaded following the Christmas and New Year holidays.
Another group, the Sonjo Tangguh, was formed in early January to help villages in Bantul crowdsource donations for mattresses and pillows, particularly for isolation facilities in 48 villages of the district, including Sumbermulyo, where a shelter house for 50 patients has also been set up.
“The shelter has been very useful for our village as the hospitals and district-run shelters were full, and we had villagers isolate. We were able to isolate those confirmed with infections but without any symptoms in the village-run shelters. As of today, we have 22 patients in isolation,” Ani Widayani, Sumbermulyo village chief, told Arab News on Sunday.
Rimawan Pradiptyo, who founded the Sonjo movement, said that each WhatsApp group established by Sonjo members, including the Sonjo Tangguh, was designed to help locals in the district amid the pandemic.
“Sonjo Tangguh was established when we saw that villages in Bantul needed about 446 mattresses and pillows to set up shelter facilities at a time when hospitals in the district faced a surge of patients,” Pradiptyo, who is also head of the economics department at the School of Economy and Business in Yogyakarta’s Gadjah Mada University, told Arab News.
“We connected the demand and supply, and so far, we have been able to donate 181 mattresses to be distributed in shelters throughout the district,” Pradiptyo added.
Agus Budi Raharjo, head of the Bantul health agency, said that while all three district-run shelters were funded and set up by the local government, the agency welcomes public donations and cooperation, including funds raised by Sonjo group members.
“We appreciate that Sonjo has played its part to mobilize funds from various parties to collectively donate to shelters, hospitals and other agencies working to tackle the pandemic in Bantul,” he told Arab News.
Sonjo is a Javanese word for cooperation and a moniker of Sambatan Jogja.
Sambatan, too, is a Javanese word that translates to “the spirit of togetherness” when villagers in Java develop a house or public facility.
The first Sonjo chat group, now named Sonjo HQ, is used as the coordination center to discuss issues faced by communities other chat groups.
“All 14 WhatsApp groups remain active as a forum dealing with their specific issues, although there are also some that are less active now as the members have managed to deal with problems, such as the Sonjo Rewangan,” Pradiptyo said.
Sonjo Rewangan was formed on Dec. 14 last year based on an initiative by Bantul health workers — including hospital directors and supporting staff — to respond to the failing online patient referral system between hospitals.
“We used a system similar to an auction, based on patient data to input on a document accessible by WhatsApp group members. Hospitals can choose to admit patients based on their data that matched with each hospital’s respective conditions. So far, the chat group has managed to refer 108 patients between them,” Pradiptyo said.
However, the group is much quieter now that the online referral system between hospitals has improved, following a discussion on a Sonjo chat group involving IT professionals and local health officials.
The latest WhatsApp chat group formed by the Sonjo community in January produced a video guide on handling the bodies and burials of coronavirus victims.
Villagers could not always rely on health workers to follow protocols, and many have handled bodies themselves.
“The Sonjo movement has been able to work due to local leaders and community members’ willingness to act. Many of us have never met in person, but we are actively connected in the chat groups. It is a social capital that has helped us to address problems we face during this pandemic,” Pradiptyo said.
Yogyakarta, a special region with 3.8 million people, reported 175 new coronavirus cases on Sunday, raising total case numbers to 26,456 in the area.
The province, along with five others on Indonesia’s densely populated island of Java, remains a hot spot for coronavirus infections in the country.
As of Sunday, Indonesia reported 7,300 new cases, raising the national tally to more than 1.2 million.
The pandemic has claimed more than 34,000 lives out of Indonesia’s 270 million people, making it one of the worst affected countries in Asia.

These were the details of the news Message of hope: Indonesian WhatsApp groups helping tackle pandemic for this day. We hope that we have succeeded by giving you the full details and information. To follow all our news, you can subscribe to the alerts system or to one of our different systems to provide you with all that is new.