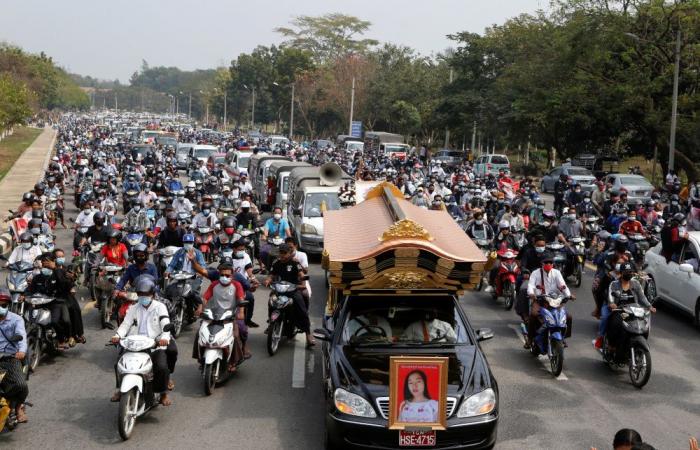 NAYPYIDAW, Feb 21 — A sombre Buddhist funeral song rung out in Myanmar’s capital as the body of a young woman, struck down during a rally against this month’s military coup, was carried to a ceremony marking the end of her short life.

Thousands lined the route of the procession to pay tribute to Mya Thwate Thwate Khaing, who was shot in the head two days before her 20th birthday at a protest demanding the release of ousted civilian leader Aung San Suu Kyi.

The grocery store worker was kept on life support for 10 days but succumbed to her wounds on Friday, making her the first protester killed for participating in the massive civil disobedience campaign sweeping the country.

An honour guard linked hands and formed a circle around her coffin as her family members and other mourners drew near to pay their respects.

“Please don’t go,” one older relative whispered, grief-stricken, as she gazed down at the open casket.

A large motorbike procession rode in convoy with the ornate black and gold hearse that transported Mya Thwate Thwate Khaing to the funeral hall, alongside other vehicles decorated with floral wreaths and photographs of the deceased.

Mourners gathered outside the funeral hall held up the three-finger salute that has been adopted as a gesture of resistance to military rule.

The crowd departed as her coffin was set ablaze for her cremation, a thin plume of smoke rising from the funeral hall’s chimney.

One young woman walked back to the road while holding aloft a vinyl banner with an image depicting the moment Mya Thwate Thwate Khaing was shot, as others held her in a vain effort to render first aid.

‘She had so much hope’

“She was a young person who had much hope for her future,” her sister Poh Poh told AFP almost two weeks ago.

In the days since she was shot, Mya Thwate Thwate Khaing has become a potent national symbol of resistance to military rule.

Vigils in her honour have been held elsewhere in the country, with protesters laying flowers at memorials to the victim and reciting the Metta Sutta—a Buddhist prayer urging protection from harm.

“We cannot attend her funeral, so we are praying for her,” Ye Lin Tun, who gathered alongside friends in Yangon to mark the death on Sunday, told AFP.

Demonstrators have in recent days hoisted photos of Mya Thwate Thwate Khaing in street marches, and news of her death on Friday sent a flash of anger through the country.

Some in the protest movement have described her as a “martyr”, and rights groups have demanded an independent investigation into her death.

“This police killing is outrageous and unacceptable, there are no other words for it,” Phil Robertson of Human Rights Watch said.

“The officer who pulled the trigger must be investigated, arrested, and prosecuted to the fullest extent of the law.”

State media claimed on Sunday that an autopsy of Mya Thwate Thwate Khaing’s body showed the bullet was not fired by police officers.

It also claimed she was “throwing stones” at security forces at the protest.

But Amnesty International said footage of the incident showed that “police recklessly targeted protesters, with no respect for their lives or safety”. — AFP

These were the details of the news Myanmar grieves as funeral rites held for young anti-coup protester for this day. We hope that we have succeeded by giving you the full details and information. To follow all our news, you can subscribe to the alerts system or to one of our different systems to provide you with all that is new.