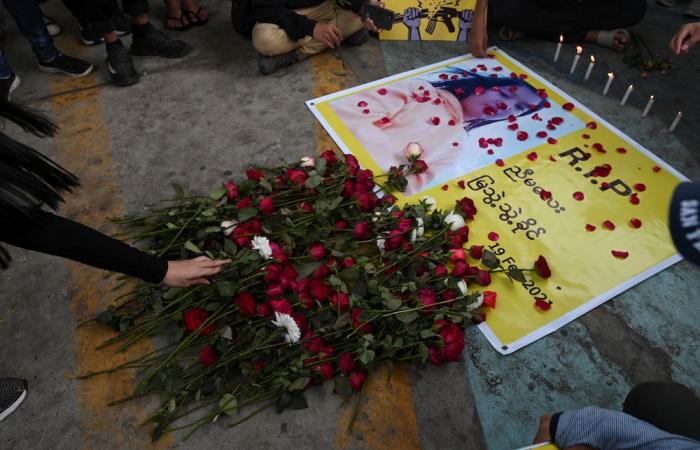 YANGON, Feb 20 — Demonstrators gathered across Yangon today to mourn the death of an anti-coup protester, as Washington urged the leaders of Myanmar’s new military regime to refrain from violence and relinquish power.

Much of the country has been in uproar since troops deposed civilian leader Aung San Suu Kyi on February 1, with large street demonstrations in major cities and isolated villages alike.

A doctor in Naypyidaw yesterday confirmed the death of Mya Thwate Thwate Khaing, a 20-year-old who was shot in the head during a protest in Myanmar’s capital last week.

She has since become a symbol of resistance for protesters, who have hoisted her photos high in demonstrations and even unfurled a massive banner of artwork from a bridge showing the moment she was shot.

“Please all join this protest movement to be more successful. That’s all I want to say,” her sister Poh Poh told reporters after her death.

On Saturday, thousands gathered at the main junctions of Yangon, Myanmar’s largest city — though the crowds appeared smaller than in recent days.

They held spontaneous vigils for Mya Thwate Thwate Khaing on the streets, lighting candles and laying roses by a banner with her picture.

“We can’t accept the police crackdowns because these are undisciplined, beyond our laws,” said protester Win Zaw, 46.

“I feel that the bullet that hit Mya Thwate Thwate Khaing’s head has also hit our heads.”

Condemnation of the violence has been fierce, and US Secretary of State Antony Blinken has held talks with allied countries in recent days to press for a firm international response.

“We reiterate our calls on the Burmese military to refrain from violence against peaceful protesters,” spokesman Ned Price told reporters yesterday.

“We will work with partners and allies to press the Burmese military to reverse its actions.”

The military regime has so far weathered a chorus of international condemnation.

The US, Britain and Canada have all announced sanctions targeting the country’s top generals.

The junta has justified its power seizure by alleging widespread electoral fraud in November’s elections, which Suu Kyi’s party won in a landslide.

But since its power grab, it has instated multiple internet shutdowns, blocked some social media sites, and arrested hundreds — often in the middle of the night.

The country today emerged from its sixth straight overnight internet blackout, a measure imposed as neighbourhoods around the country began setting up watch groups to guard against evening arrests.

Internet monitor NetBlocks reported that Wikipedia had been blocked in the country, joining a list of banned content that included Facebook and other social media services.

Nearly 550 people have been arrested, charged or sentenced since the coup, according to the Assistance Association for Political Prisoners (AAPP), with 500 still behind bars.

Among those targeted have been railway workers, civil servants and bank staff who have walked off their jobs as part of a civil disobedience campaign aimed at crippling the army’s ability to govern.

A small group of protesters was forcefully dispersed by police and military wielding batons in the northern city of Myitkyina yesterday, according to witnesses and video posted online.

The AAPP confirmed that two teachers were arrested but later released.

There have also been isolated reports of members of the security forces taking part in nationwide protests.

This week, images of a soldier in the Sagaing region joining anti-coup demonstrators went viral.

But by today, the military’s information team released a video of the soldier, sergeant clerk Than Lwin, sitting straight-back against a wall, claiming he was drunk when he joined the protesters.

“When I woke up, I realised I was wrong... They used me to ruin my life,” Than Lwin said of the protesters, in the confession-style video.

Authorities have maintained that methods used to disperse protesters are according to the law, and a military spokesman said this week that one police officer had died in Mandalay after a clash.

Suu Kyi — who has not been seen since she was detained in a dawn raid — has been hit with two charges, one of them for possessing unregistered walkie-talkies.

Her hearing is expected on March 1. — AFP

These were the details of the news Rallies mourn anti-coup protester death as US urges Myanmar junta to yield power for this day. We hope that we have succeeded by giving you the full details and information. To follow all our news, you can subscribe to the alerts system or to one of our different systems to provide you with all that is new.