The face of the Perseverance landing was an Indian American woman 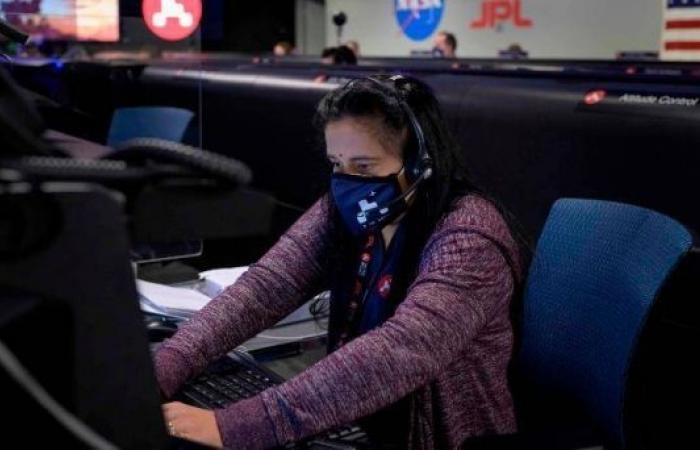 Hind Al Soulia - Riyadh - WASHINGTON — It was Swati Mohan who first delivered the news to earthlings that NASA's Perseverance rover had successfully landed on Mars.

"Touchdown confirmed," she announced to roaring applause from mission control at NASA's Jet Propulsion Laboratory in Pasadena, California. "Perseverance safely on the surface of Mars, ready to begin seeking the signs of past life."

You might have seen her in the front row of the control room, bindi on her forehead, providing constant updates to the team as mission commentator for the historic landing. But before that nail-biting moment, Mohan had been working for years to make it all happen.

Mohan, an Indian American who moved to the United States when she was a year old, is the guidance and controls operations lead for the Perseverance rover mission, acting as the "eyes and ears" for NASA's most sophisticated spacecraft to date.

Not only is Mohan a pivotal player in the effort to determine whether there was ever life on the red planet; she's also a reflection of the progress NASA has made in reflecting the nation it represents.

Her passion for space started with 'Star Trek'

Mohan has been interested in space ever since she saw her first "Star Trek" television episode at age 9. It opened up her world to the beauty and expanse of the universe.

"I remember thinking 'I want to do that. I want to find new and beautiful places in the universe,'" she recalled in a Q&A on NASA's website. "The vastness of space holds so much knowledge that we have only begun to learn."

Still, she thought she would grow up to become a pediatrician. It wasn't until she took her first physics class at age 16 that she began considering a career in engineering, which would allow her to follow her childhood dreams of exploring space.

Mohan went on to study mechanical and aerospace engineering at Cornell University, followed by a master's degree and a doctorate in aeronautics and astronautics at the Massachusetts Institute of Technology. Eventually, she landed at NASA.

Before her work on Perseverance, Mohan was a part of space exploration efforts such as Cassini, a spacecraft that unearthed countless discoveries about Saturn, and GRAIL, a mission that sent twin spacecraft around the moon.

She started working on the Mars 2020 mission in 2013, and ultimately became the lead engineer for guidance, navigation and controls operations. She helmed the mission's attitude control system, which helps make sure the spacecraft is heading in the direction it needs to be.

"During the cruise phase heading toward Mars, our job is to figure out how we are oriented, make sure the spacecraft is pointed correctly in space (solar arrays to sun, antenna to Earth), and maneuver the spacecraft to get it where we want to go," Mohan explained in a NASA Q&A. "During entry, descent, and landing on Mars, GN&C determines the position of the spacecraft and commands the maneuvers to help it land safely."

And on Thursday, she was one of two voices heard in the control room and around the world —- explaining major milestones in NASA's first mission to search for signs of life on another planet.

This was a diverse mission

It wasn't just Mohan, either.

The Perseverance rover mission was diverse by a number of measures: race, gender, and sexuality. That the team behind the historic spacecraft included folks like landing lead Allen Chen, and engineers such as Moogega Cooper, Cj Giovingo, and Gregorio Villar, shows it was representative of the nation's demographics.

That array of names and faces is a sign of the progress NASA has made since it was founded in 1958. White men were long seen as the face of the space exploration program, despite significant contributions from women and people of color over the years. The agency had only ever selected White men as astronauts until 1978, when it admitted a class that included the first female, first African American and first Asian American astronauts.

There is still progress to be made, but NASA's workforce now looks much more like the nation.

These were the details of the news The face of the Perseverance landing was an Indian American woman for this day. We hope that we have succeeded by giving you the full details and information. To follow all our news, you can subscribe to the alerts system or to one of our different systems to provide you with all that is new.