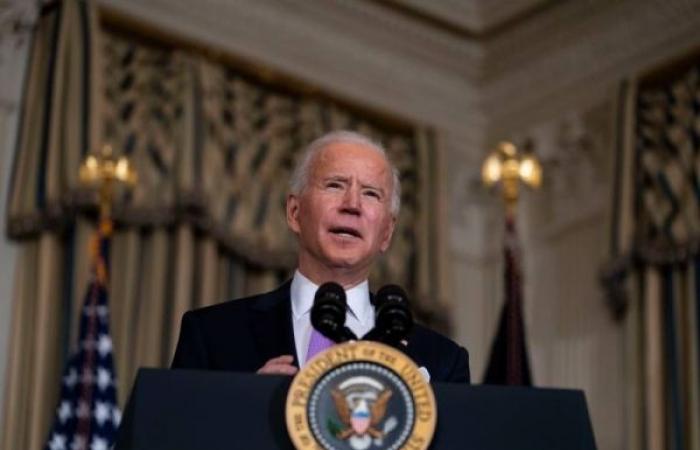 We show you our most important and recent visitors news details Biden repudiates Trump on Iran, ready for talks on nuke deal in the following article

Hind Al Soulia - Riyadh - WASHINGTON — In a significant move to jumpstart diplomacy, the Biden administration said Thursday that the US is willing to sit down for talks with Tehran and other signatories to the Iran nuclear deal before either side has taken any tangible action to salvage or return to compliance with the agreement.

"The United States would accept an invitation from the European Union High Representative to attend a meeting of the P5+1 and Iran to discuss a diplomatic way forward on Iran's nuclear program," State Department spokesperson Ned Price said in a statement Thursday. The P5+1 refers to the permanent members of the UN Security Council — China, France, Russia, the United Kingdom, and the United States — and Germany.

It is a move to lay the groundwork for diplomacy that could eventually break the ongoing impasse between Washington and Tehran, both of whom have insisted the other must act first.

The US officials were careful to stress that their willingness to sit down with partners and Iran wasn't a concession or even the beginning of nuclear talks, but instead, was simply the first diplomatic step to figure out how to begin discussing issues of substance.

"Until we sit down and talk, nothing's going to happen. It doesn't mean that when we sit down and talk we're going to succeed, but we do know that if we don't take that step, the situation is just going to go from bad to worse," the first senior State Department official said. "It's a meaningful step, but we recognize it's just one of many that will have to be taken from all sides."

Enrique Mora, deputy secretary-general for political affairs of European External Action Service, said on Twitter that the Iran nuclear deal, which the US abandoned during the Trump administration, was "at a critical moment.

"Intense talks with all participants and the US. I am ready to invite them to an informal meeting to discuss the way forward," he said.

It is unclear if the Iranians would accept such an overture, the official told reporters Thursday, nor has a meeting been scheduled.

It was one of several efforts the administration unveiled Thursday in an effort to lay the groundwork for diplomacy.

The Biden administration informed the UN Security Council that it was reversing the Trump administration's unilateral efforts to snapback UN sanctions on Iran. Then-Secretary of State Mike Pompeo claimed in September that the US had reimposed all UN sanctions on Iran, despite no longer being a party to the nuclear deal, in an effort that was roundly rejected by other UN member states.

"Snapback was designed to help ensure that Iran performed its commitments under the JCPOA," a second senior State Department official said. "No other member of the UN Security Council agreed that the previously terminated provisions of prior resolutions had snapped back last September, despite the prior administration's position. So that essentially isolated the United States on the Security Council and in the UN system and weakened our ability to work with our allies and partners on the Security Council to address Iran's destabilizing activity."

"By reversing this position it basically puts us back in good stead with our with our allies and partners and strengthens our ability to engage other Security Council members on Iran," they added. — Courtesy CNN

These were the details of the news Biden repudiates Trump on Iran, ready for talks on nuke deal for this day. We hope that we have succeeded by giving you the full details and information. To follow all our news, you can subscribe to the alerts system or to one of our different systems to provide you with all that is new.