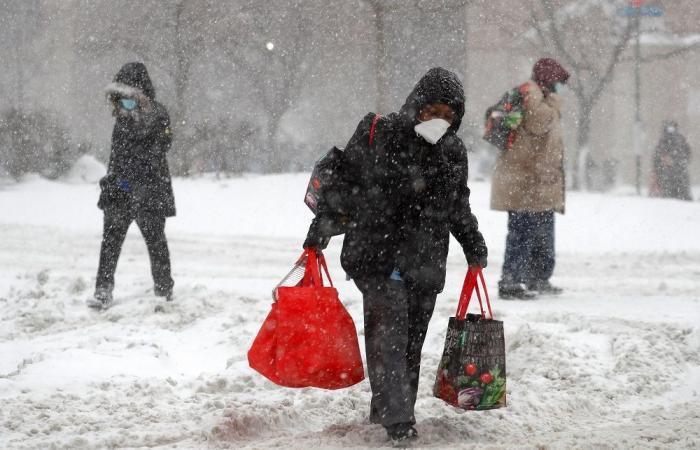 The historic frigid blast has over the past week seen Arctic cold envelope much of the US sun belt unfamiliar with such extremes, leaving dozens of dead in its wake and several million Texans told to boil water before consuming it.

Yesterday, a “major” winter storm impacted an area stretching from Virginia up to the Northeast, bringing icy buildups and “treacherous” travel conditions, according to the National Weather Service.

Snow fell steadily across New York City throughout the day, forcing the cancelation of about 200 flights and delaying the opening of two Covid-19 vaccination sites after the storm disrupted dosage delivery.

The Big Apple has already been blanketed by the white stuff twice this winter during two separate storms.

“The occasional snowstorm is always good but as we’re getting closer to March it gets a little tiring. I’m ready for it to start being warm again,” said 18-year-old student Kara Dickson.

A weather warning was in effect in New Jersey, where Governor Phil Murphy announced the temporary closure of several vaccination sites.

“This may result in many appointments needing to be rescheduled,” he said.

Across Texas, which has been hardest hit by the cold snap, utility companies were gradually restoring power though more than 350,000 homes and businesses remained without electricity late yesterday afternoon, according to PowerOutage.us.

Texas power companies implemented rolling blackouts to avoid grids being overloaded as residents cranked up the heat. The surge in demand came as generating capacity dropped thanks to power stations and wind turbines freezing.

David Hernandez, 38, spent the night at a Houston church with other people who had fled their homes.

“My car got stranded and I was trying to sleep in the car but it was just too cold. I had to come here,” he said.

Texas authorities opened about 300 emergency “warming centres” across the state.

Nearly seven million Texans were advised to boil their water before drinking it or using for cooking, said Toby Baker, who heads the Texas Commission on Environmental Quality, adding that nearly 264,000 people were impacted by non-operational water systems.

Texas’s woes have sparked outrage in the Lone Star State, the only one of the US’s 48 continental states to have its own independent power grid.

Beto O’Rourke, a former Democratic presidential candidate from Texas, said it was at risk of becoming “a failed state.”

Anger soared yesterday after it was revealed Texas Senator Ted Cruz had flown to the Mexican holiday resort of Cancun during the crisis.

As political rivals called for his resignation, Cruz justified the flight by saying his one-night stay was to drop his children off before he flew home.

Even though the Arctic air mass was beginning to loosen its grip in Texas and elsewhere in the south, the NWS said frigid temperatures would continue.

Biden was forced to postpone until today a visit to the Pfizer Covid-19 vaccine manufacturing site in Kalamazoo, Michigan while federal government offices in Washington were closed yesterday.

Los Angeles’ mayor announced that 12,500 people would have their vaccinations scheduled for today postponed due to dosage delays.

More than 30 storm-related deaths have been reported by US media since the cold weather arrived last week, many in traffic accidents.

Houston police said a woman and a girl died from carbon monoxide poisoning after sitting in a car in a garage with the engine running to keep warm.

Emergency medical authorities around Texas said dozens of others have been treated for suspected carbon monoxide poisoning.

A dozen animals — including one 58-year-old female chimpanzee — died during the freeze at rescue sanctuary Primarily Primates near San Antonio, the organisation said on its website.

The winter storm has spawned at least four tornadoes, according to Atlanta-based weather.com, including one in North Carolina on Monday that killed at least three people and injured 10. — AFP

These were the details of the news Deadly winter storm blankets eastern US in snow for this day. We hope that we have succeeded by giving you the full details and information. To follow all our news, you can subscribe to the alerts system or to one of our different systems to provide you with all that is new.