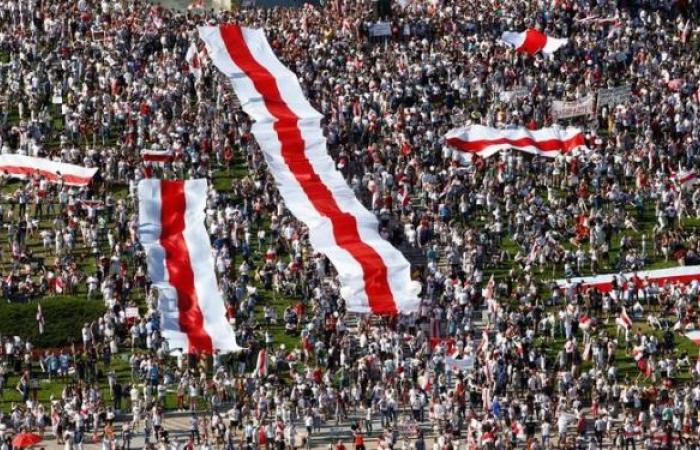 Hind Al Soulia - Riyadh - MINSK — A court in Belarus on Thursday sentenced two female journalists to two years in prison on charges of violating public order after they covered a protest against the nation's controversial president.

They were arrested on Nov. 15, 2020 in a flat in Minsk from which they had filmed live coverage of the violent dispersal of a demonstration in homage to an opposition activist, Roman Bondarenko, who had died a few days earlier in police custody after being arrested.

The pair were charged with "organizing actions rudely violating public order," accusations they have denied.

From the defendants' cage, they made V signs with their fingers during the trial, a symbol of victory and a rallying sign for detractors of Lukashenko's authoritarian regime.

The US Embassy in Belarus has called for their release and is urging Belarusian authorities to stop prosecuting journalists for doing their jobs.

Belarus has been rocked by protests after official results from the Aug. 9 presidential election handed President Alexander Lukashenko a sixth term in office by a landslide. The opposition and some poll workers have said the election was rigged.

Authorities in the Eastern European nation have responded with a sweeping crackdown on the demonstrations, the biggest of which attracted up to 200,000 people. According to human rights advocates, more than 30,000 people have been detained since the protests began, and thousands were brutally beaten.

The United States and the European Union have responded to the Belarus election and the crackdown by introducing sanctions against Belarusian officials.

Responding to the court ruling in a series of tweets, Sviatlana Tsikhanouskaya, Lukashenko's opponent in the presidential election and who has positioned herself as the leader of the opposition from exile in Lithuania, praised the journalists.

In one post, Tsikhanouskaya tweeted: "Just look at Darya and Katsiaryna — strong, smiling, and saying goodbyes to their loved ones through bars. Lukashenka can't break us".

In another, she said: "Tell your friends about what is happening in Belarus. Tell your colleagues, post on social media. The world must see this lawlessness & state terror by Lukashenka.

In addition to Andreyeva and Chultsova, there are 11 journalists currently in prison, prosecuted in connection with various investigations related to the protest, according to the Belarusian Association of Journalists.

On Friday, the trial of Katerina Borisevich, a journalist for online news portal Tut.by, and Dr Artiom Sorokin will begin.

Detained for three months, they are accused of having "divulged medical secrets" by publishing a document showing that 31-year-old painter Roman Bondarenko was sober at the time of his death, contrary to what the authorities claim.

Bondarenko was set upon in a Minsk courtyard on Nov. 11, 2020 by what were believed to have been plainclothes police officers. He reportedly struck his head on the ground before he was taken into police custody. He was later found by family in a city hospital in a coma where he died the next day.

Borisevich and Sorokin both face three years in prison.

A series of 90 raids this week targeted another 20 journalists, community activists and trade union leaders as part of an investigation into the financing and organization of the 2020 protests.

According to the authorities, those targeted by the raids "not only provided support" to the demonstrations but also "acted as foreign agents, organizing and financing demonstrations under the guise of human rights activities".

This repression, which has been going on for months, has been denounced by Western countries, with the EU and the United States adopting sanctions against people close to the Belarusian president. — Euronews

These were the details of the news Two Belarusian journalists jailed for two years for covering protest for this day. We hope that we have succeeded by giving you the full details and information. To follow all our news, you can subscribe to the alerts system or to one of our different systems to provide you with all that is new.