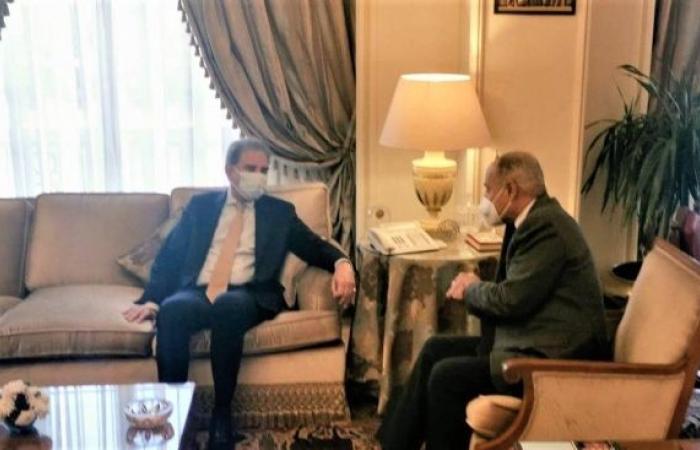 We show you our most important and recent visitors news details Ties between Arab countries, Pakistan based on common interests, says Arab League chief in the following article

Hind Al Soulia - Riyadh - CAIRO — The Secretary-General of the League of Arab States, Ahmed Aboul Gheit, has expressed his deep appreciation for the historic ties between Pakistan and the Arab countries, which are based on a broad base of common interests and cultural, religious and people ties.

Aboul Gheit made the remarks during his meeting here on Thursday with Pakistan's Foreign Minister Makhdoom Shah Mahmood Qureshi, who is currently visiting Egypt.

The General Secretariat of the Arab League said that the foreign minister of Pakistan stressed, during the meeting, his country's keenness to strengthen cooperation frameworks between Pakistan and the League and Arab countries in various fields of common interest.

The meeting dealt with issues of common interest between the two sides.

Shah Mahmood Qureshi expressed his pleasure in his meeting with Aboul Gheit, which he said aimed to reaffirm the importance of Pakistan accords to the organization (Arab League) and all of its member states.

In his message on the Twitter Qureshi said: "(We) discussed bringing new innovation and direction to our existing framework of cooperation to develop stronger collaboration." — WAM

These were the details of the news Ties between Arab countries, Pakistan based
on common interests, says Arab League chief for this day. We hope that we have succeeded by giving you the full details and information. To follow all our news, you can subscribe to the alerts system or to one of our different systems to provide you with all that is new.