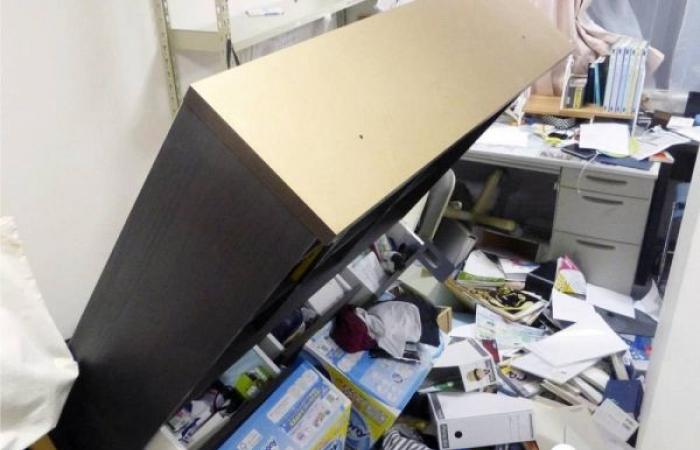 We show you our most important and recent visitors news details Powerful quake shakes up Japan area; 100 hurt in the following article

Hind Al Soulia - Riyadh - TOKYO — A powerful earthquake that hit Japan on Saturday was an aftershock of the devastating 9.0 magnitude quake that struck the same area almost 10 years ago, according to the national Meteorological Agency.

The 7.1 magnitude earthquake struck the country's east coast at 11:07 p.m. Saturday. At least 100 injuries were reported in Fukushima and Miyagi prefectures, according to state broadcaster NHK, but there were no major casualties.

The epicenter hit about 46 miles (74 kilometers) northeast of Namie, a coastal town 60 miles from Fukushima, according to the United States Geological Survey. The earthquake measured about 36 miles in depth. No tsunami warning was issued.

Prime Minister Yoshihide Suga said during a meeting of Cabinet ministers Sunday morning that no deaths had been reported in the quake, but urged vigilance amid the prospect of continued aftershocks up to a strong 6 on the Japanese scale.

“We urge the people in the affected areas to continuously pay attention to information from entities such as municipalities, be on alert and be ready to act fast and consider weather changes after tomorrow,” Suga said.

People were reported hurt in Miyagi, Fukushima, Ibaraki, Tochigi, Saitama and Chiba prefectures, but no serious injuries were confirmed. Nationwide, at least 950,000 homes temporarily lost power, but that was mostly resolved as of Sunday morning.

Early Sunday morning, Suga reassured the public that "no abnormalities" have been reported at any of the nuclear plants in the region after Saturday's quake.

Speaking to reporters, Suga said the damage is still being assessed, and asked residents in the affected area to stay indoors and be prepared for aftershocks.

The earthquake triggered landslides and uprooted sections of a major expressway, affecting both prefectures. Embankments along the road collapsed, covering the road and burying guardrails in mud, NHK reported.

About 850,000 households in the Kanto and Tohoku regions, which include greater Tokyo, lost power after the quake, NHK reported. Power is now gradually being restored.

Defense Minister Nobuo Kishi directed the Self-Defense Forces to gather information on the scope of the damage and be prepared to respond immediately.

Kishi told reporters Sunday morning that the SDF would be dispatched immediately if there were requests from local municipalities.

At a news conference early Sunday morning, Meteorological Agency official said aftershocks of up to a strong 6 on the Japanese scale could occur for at least a week. The official said Saturday’s quake was believed to be an aftershock of the Great East Japan Earthquake that struck the same region on March 11, 2011.

“Because (the 2011 quake) was an enormous one with a magnitude of 9.0, it’s not surprising to have an aftershock of this scale 10 years later,” said Kenji Satake, a professor at the University of Tokyo’s Earthquake Research Institute.

The quake registered a strong 6 in the southern part of Miyagi, and in the Nakadori central and Hamadori coastal regions of Fukushima, the Meteorological Agency said.

No abnormalities had initially been detected at the Fukushima Nos. 1 and 2 nuclear power plants, according to Tokyo Electric Power, but the Sankei newspaper later reported water at the spent fuel pools of the No. 1 plant’s reactors 5 and 6 buildings had partially spilled over. The spillage was limited to inside the buildings.

Following the quake, JR East temporarily halted operations of its Tohoku, Joetsu and Hokuriku shinkansen lines. Power outages occurred on some sections. A landslide had covered a section of the Joban Expressway in Soma, Fukushima Prefecture, officials said, but no vehicles were found to be trapped.

After the 7.1 quake, many smaller earthquakes with magnitudes between 3 and 5 occurred off Fukushima.

The quake, which comes less than a month before the 10th anniversary of the Great East Japan Earthquake, registered a 4 on the Japanese scale as far north as Aomori Prefecture and as far west as Shizuoka Prefecture.

Saturday's quake took place in the same area as the March 11, 2011, earthquake that caused the country's worst nuclear disaster on record, when three reactors at the Fukushima Daiichi nuclear plant melted down, releasing radioactive materials into the air.

More than 20,000 people died or went missing in the 2011 quake and tsunami, while hundreds of thousands more lost their homes. More than 100,000 people were evacuated from the area.

Authorities have spent the past ten years cleaning up the area — a massive effort that experts say will take another few decades to complete. — Agencies

These were the details of the news Powerful quake shakes up Japan area; 100 hurt for this day. We hope that we have succeeded by giving you the full details and information. To follow all our news, you can subscribe to the alerts system or to one of our different systems to provide you with all that is new.

PREV Russia beefs up warship presence in Black Sea as Ukraine tensions simmer
NEXT Nine dead in shooting at FedEx facility in US; shooter named