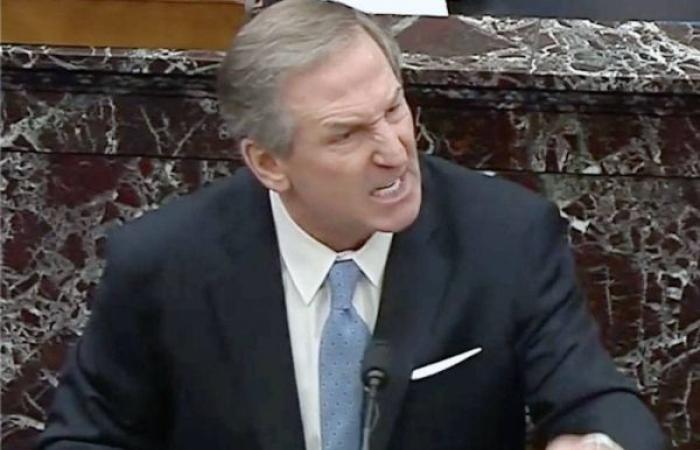 Hind Al Soulia - Riyadh - WASHINGTON — The US Senate is meeting in a rare weekend session on Saturday for closing arguments in Donald Trump’s second impeachment trial.

The evenly divided chamber is due to vote on whether the former president will be held accountable for inciting the Jan. 6 insurrection in Washington.

The closing phase of the trial is putting new scrutiny on what actions Trump took when his supporters overwhelmed police and stormed the Capitol.

A last-minute fight over calling witnesses threatened to slow the speedy conclusion of the trial. Proceedings came to an abrupt halt, with senators seemingly confused about the next steps.

According to multiple sources involved directly in talks to resolve the issue of witnesses, there are intense discussions involving all parties right now: Senate GOP Leader Mitch McConnell, Democratic Leader Chuck Schumer, along with former president Trump's team and the House impeachment managers.

According to CNN, there are also discussions ongoing about avoiding witness testimony at all and dropping it directly in the record.

In the backdrop of the unfolding confusion over whether witnesses will be called is the already tenuous status of former President Trump's defense team.

They had been essentially hanging by a thread for the last several days, according to multiple people, who described internal deliberations as chaotic, disorganized and strained.

The attorneys and advisers have been arguing constantly over disagreements about how to move forward for days.

They were irritated by Trump's criticism and unprepared for how to deal with his outbursts. He has mainly been angry about their performance, though he liked Michael van der Veen and praised him last night.

The attorneys have argued with each other and were annoyed by GOP senators telling them what to do on the floor.

And now that there's the threat of witnesses, they are trying to figure out how much longer they will be doing this job they believed was coming to an end.

Euronews reported that House impeachment prosecutors said they had fresh information that could delay the vote. They announced Saturday morning they want to call a witness in the trial.

Lead Democratic prosecutor Jamie Raskin of Maryland said he would seek to hear from Republican congresswoman Jaime Herrera Beutler, who has widely shared a conversation she had with House Republican leader Kevin McCarthy over Trump's actions as the mob was rioting over the presidential election results.

It's unclear if she or any other witnesses will be called. A total of 55 senators voted to debate the motion to subpoena.

Raskin said it was necessary to determine Trump’s role in inciting the deadly riot, but the ex-president’s attorney Van der Veen reacted angrily to the request.

"There is no jurisdiction here. There has been no due process here. They have completely violated and ignored and stepped on the Constitution of the United States," he said.

Democrats argue Trump incited the riot and then refused to stop it, putting Vice President Mike Pence in danger. While most Democrats are expected to convict the former president, acquittal is likely in the evenly divided Senate.

Lawyers for Trump say charges of insurrection incitement against the former president are a "monstrous lie". On Friday, they urged Senators to acquit Trump, claiming the real goal of Democrats was "vengeance" and the "canceling" of the right-wing populist movement surrounding him.

The defense team took less than four hours of the 16 allocated to make their case that Trump had not done anything to incite the actions of the supporters who rioted on Capitol Hill on Jan. 6.

After defense submissions, Senators were given four hours to ask questions of both sides, but observers say Republicans are likely to stand by the former president and bring in a verdict of not guilty.

They said the Capitol invaders believed they were acting on "the president's orders” and reflected his violent rhetoric when they set out to storm the building and stop the joint session that was certifying Democrat Joe Biden's election. — Agencies

These were the details of the news Trump’s impeachment trial thrown into confusion amid row over new witnesses for this day. We hope that we have succeeded by giving you the full details and information. To follow all our news, you can subscribe to the alerts system or to one of our different systems to provide you with all that is new.