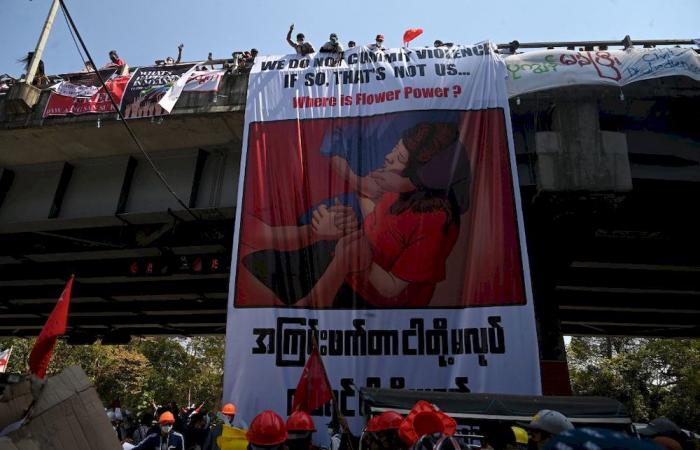 YANGON, Feb 11 — As a young female anti-coup protester fights for her life after being shot in Myanmar’s capital this week, a potentially dangerous hunt to find the shooter has been launched on social media.

Instead of celebrating her 20th birthday Thursday, Mya Thwate Thwate Khaing lies on an intensive care hospital bed, her head covered in bandages with patches over her eyes.

The grocery store worker is among the hundreds of thousands across the country to have risked their safety and taken to the streets in outrage over the ousting of civilian leader Aung San Suu Kyi in a military coup.

Doctors say she needs help to breathe with machines and only has a small chance of survival.

“The bullet shot through her skull, so she is in a critical condition,” a Naypyidaw doctor told AFP as her devastated family kept a vigil by her bedside.

Graphic video is circulating online of Mya Thwate Thwate Khaing falling to the ground and onlookers scrambling to give first aid to the long-haired teenager in a red t-shirt with cartoon pandas.

Amnesty International says it has verified footage of the incident and says “police recklessly targeted protesters, with no respect for their lives or safety whatsoever”.

“Their abhorrent use of lethal force against protesters is unlawful, and must be independently, thoroughly and promptly investigated,” Sam Dubberley from the rights group said.

The identity of the gunman remains unknown but Facebook and Twitter users have launched an online hunt.

Some have posted private details — including the home address and family business locations — of a man they suspect fired the bullet.

“On Facebook today, I am very sorry to see that my pictures (taken from my Facebook) are being compared to the picture of the police officer from the Naypyidaw shooting today,” the man wrote in response.

“This misrepresentation has caused a great deal of damage.”

In Myanmar Facebook has become synonymous with the internet itself as the country emerged from decades of isolation, but the lack of digital literacy has helped spawned violence and lynch mobs in recent years.

The social media giant has faced criticism for allowing the spread of misinformation and hate speech to fan ethnic and religious tensions between Buddhists and Muslims.

Mya Thwate Thwate Khaing’s friends marked her birthday by taking flowers and food to a Buddhist temple to pray for her.

“She was a young person who had much hope for her future,” her sister Poh-Poh told AFP, crying.

“Some people say no hope but we believe in you, little sis — stay strong,” one of her work colleagues posted.

“We only want to wish you happy birthday, not RIP... so please do come back being healthy.”

Mya Thwate Thwate Khaing is now a household name across Myanmar and her plight has gained international attention.

“They can shoot a young woman but they can’t steal the hope & resolve of a determined people,” UN Special Rapporteur Tom Andrews tweeted.

As mass street protests continue for a sixth day across the country, Mya Thwate Thwate Khaing’s life-threatening injuries have become a rallying point.

A 15 metre-long billboard banner, with artwork depicting the moment she was shot was hung off a bridge in Yangon on Wednesday, while some protesters have carried photos of her as they march. — AFP

These were the details of the news Myanmar gunshot victim fights for life amid online hunt for shooter for this day. We hope that we have succeeded by giving you the full details and information. To follow all our news, you can subscribe to the alerts system or to one of our different systems to provide you with all that is new.