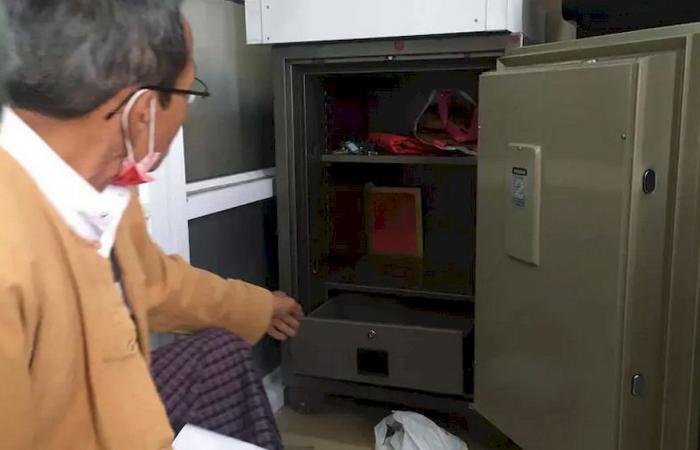 They sounded the alarm on Facebook late yesterday, announcing that “the military dictator had raided and destroyed” the NLD’s premises.

The move comes over a week after its leader was deposed in a coup, returning Myanmar to military rule after a brief 10-year dalliance with democracy.

The party has been left rudderless — with the detention of Suu Kyi, President Win Myint and top NLD executives, its fate is now in the hands of lower-ranking MPs and members.

“We wanted to go to the headquarters immediately, but because of the curfew, we knew there might be problems,” Soe Win, an NLD member in charge of the Yangon headquarters, told AFP today.

“We had to wait until morning.”

After a city-wide night-time curfew ended at 4 am, party members rushed to the headquarters in Shwegondine Township to assess the damage, arriving just before dawn.

“There were no keys and our main door was left opened... we found all the locks on our doors destroyed,” Soe Win said.

In their server room, the central processing unit was gone, as were printers and scanners, while the cable server wires were cut and left in a tangled mess.

Before the CCTV server cable was severed, the headquarters’ security guard could see military and police officers, as well as people in civilian clothing, searching through their tables and drawers.

“The safe box is gone,” Soe Win said sadly, as he showed a large grey safe that had been left open.

“There were some cash and bank cheques and bank books... I don’t know the exact amount in there.”

The site was a pilgrimage spot in the historic 2015 vote, drawing thousands of supporters as they awaited poll results after casting their ballots in the first democratically contested election in over 50 years.

In the rain, they sang pro-democracy songs about Aung San, Suu Kyi’s father, who is regarded as a national hero for freeing Myanmar from the yoke of colonialism.

Since the coup, protestors have gathered there to call for Suu Kyi’s release and for the military to respect November’s election, which the NLD once again won overwhelmingly.

But today, after the raid, the street in front of HQ was empty.

“We are more saddened that the raid happened during the curfew hours,” said Soe Win, adding that despite the events since the putsch, they’ve been trying to keep their offices open.

He added that the party will be filing a police complaint, even though “we don’t trust it”.

Before the coup, the military accused the NLD-led government of widespread voter fraud in the November poll, which is how they justified the power grab.

These were the details of the news Aung San Suu Kyi’s party at a loss after Yangon office raid for this day. We hope that we have succeeded by giving you the full details and information. To follow all our news, you can subscribe to the alerts system or to one of our different systems to provide you with all that is new.