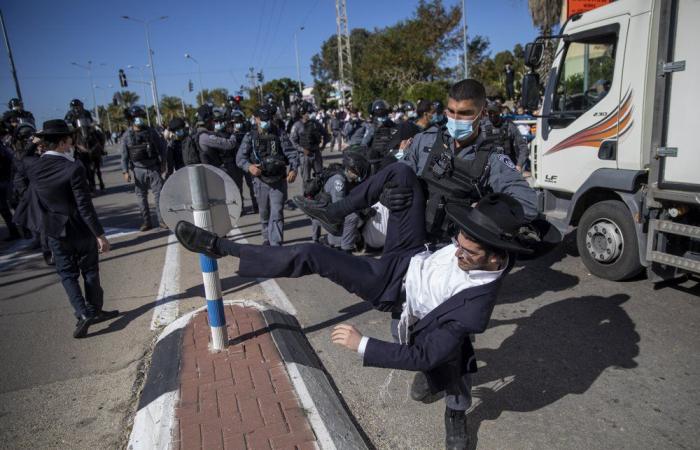 You are now following the details of the Israel’s ultra-Orthodox reject criticism, defy virus rules news and now we leave you with the details

Mohamed Nass - Cairo - JERUSALEM (AP) — Mendy Moskowits, a member of the ultra-Orthodox Belz Hassidic sect in Jerusalem, doesn’t understand the uproar toward believers like him.

In recent weeks, ultra-Orthodox Jews have defied coronavirus restrictions by holding big funerals for beloved rabbis who died of COVID-19, celebrating large weddings, and continuing to send their children to schools. The gatherings have led to clashes with police and an unprecedented wave of public anger toward the religious community.

On Tuesday night, hundreds of ultra-Orthodox demonstrators protested lockdown restrictions, set dumpsters on fire, and faced off with police officers in Jerusalem.

Moskowits, like many other ultra-Orthodox faithful, says Israeli society doesn’t understand their way of life and has turned his community into a scapegoat.

“The media gives us, in my opinion, a very bad misrepresentation,” he said.

The ultra-Orthodox community makes up about 12 percent of Israel’s 9.3 million people. But it has wielded outsize influence, using its kingmaker status in parliament to secure benefits and generous government subsidies.

Ultra-Orthodox men are exempt from compulsory military service and often collect welfare payments while continuing to study full time in seminaries throughout adulthood. Their schools enjoy broad autonomy and focus almost entirely on religion while shunning basic subjects like math and science.

These privileges have generated disdain from the general public — resentment that has boiled over into outright hostility during the coronavirus crisis.

Gilad Malach, a researcher at the Israel Democracy Institute, says ultra-Orthodox believers accounted for over a third of the country’s COVID-19 cases in 2020. Among Israelis over 65, the ultra-Orthodox mortality rate was three times that of the general population, he added.

Ultra-Orthodox noncompliance, Malach said, stemmed in part from members not believing that they “need to obey the rules of the state, especially regarding questions of religious behavior.”

Ultra-Orthodox, also known as “Haredim,” follow a strict interpretation of Judaism, and prominent rabbis are the community’s arbiters in all matters. Many consider secular Israelis a recent aberration from centuries of unaltered Jewish tradition.

“We have rabbis. We don’t just do what we have in our minds,” Moskowits said. “We have listened to them for a few thousand years. We will listen to them today as well.”

While the ultra-Orthodox community is far from monolithic, many rabbis have either ignored or even intentionally flouted safety rules. The 93-year-old Rabbi Chaim Kanievsky, one of the most influential spiritual leaders, has insisted schools remain open throughout the crisis.

On a recent day, scores of ultra-Orthodox girls cascaded from a grade school in the Romema neighborhood that was operating in violation of the law. Few wore masks or maintained distance from others. Classes went on at nearby boys’ elementary schools and yeshivas.

“We can’t have a generation go bust,” said Moskowits, who lives in Romema. “We are still sending our boys to school because we have rabbis who say Torah study saves and protects.”

In a community that largely shuns the internet, rabbis plaster “pashkevils,” or public notices, on walls in religious neighborhoods to spread their messages.

Some notices urged people not to get vaccinated, even using Holocaust imagery to scare people. “The vaccine is completely unnecessary! The pandemic is already behind us!” one read, comparing the rush for vaccinations to boarding a train to the Auschwitz death camp.

Ultra-Orthodox leaders say such views are held by a radical minority. Most people respect safety rules, they say, and the virus is spreading because communities are poor and people live in small apartments with large families.

Moskowits, a 29-year-old father of two, said some families have up to 10 children and just one bathroom. From 14, boys are sent to boarding schools and spend only the sabbath at home.

For many, lockdown “technically, physically doesn’t work,” Moskowits said. He called it a “human rights violation.”

Moskowits, who grew up in the UK, speaks English with a British accent, but his vocabulary is heavily seasoned with Yiddish and Hebrew words. He wears the black velvet skullcap, pressed white shirt and black slacks typical of ultra-Orthodox men — but no mask, despite the government requiring them in public. He said he contracted COVID-19 in March and claims a letter from his doctor excuses him from wearing a mask.

A real estate developer, he punctuates his workday with prayers at a neighborhood synagogue, and tries once a week to pray at Jerusalem’s Western Wall, the holiest place where Jews can worship. Once a day, he performs ablutions at a mikvah, a Jewish ritual bath, and he regularly studies religious texts with a partner.

The religious community is growing rapidly even though economists have long warned that the system is unsustainable. About 60 percent of its population is under 19, according to the Israel Democracy Institute.

Protecting the ultra-Orthodox way of life — or Yiddishkeit — is the community’s ultimate aim. If that means infections spread, that’s a price some members are willing to pay.

Ultra-Orthodox people “sacrifice most of their lives for the next generation and for preserving Yiddishkeit. We give away everything,” Moskowits said.

This view is hardly universal.

Nathan Slifkin, an Orthodox rabbi living in Israel, complained in a recent op-ed in the Jewish Chronicle that members of the Haredi community “genuinely see no connection between flouting the restrictions and people dying from COVID.”

Yehuda Meshi-Zahav, head of an ultra-Orthodox ambulance service called ZAKA, lost both his parents to the virus in January. He says rabbis urging followers to violate coronavirus regulations have “blood on their hands.”

Funerals play a central role in traditional Jewish life, and the pandemic has made them all too common. Cars with megaphones drive through religious neighborhoods announcing deaths and funeral details. Pashkevils notify communities when a prominent rabbi dies.

Shmuel Gelbstein, deputy director of a Jerusalem funeral society for the ultra-Orthodox community, said this year has been “very busy, very difficult regarding mortality, both when it comes to ordinary deaths, plus of course coronavirus, which is certainly an amount that adds to the load.”

Israel’s non-Orthodox majority was outraged at what they saw as contempt for the rules and selective enforcement by authorities.

But the ultra-Orthodox claim they are being unfairly singled out, noting that demonstrations against Prime Minister Benjamin Netanyahu — protected under free speech laws — have been permitted to continue during the pandemic.

Moskowits explained that for the young men who flocked to these funerals, prominent rabbis are “a huge part of your life.”

“When these younger guys go to a funeral, they feel that their father died,” he said. “Nothing stands in the way. He will go to the funeral anyway.”

These were the details of the news Israel’s ultra-Orthodox reject criticism, defy virus rules for this day. We hope that we have succeeded by giving you the full details and information. To follow all our news, you can subscribe to the alerts system or to one of our different systems to provide you with all that is new.