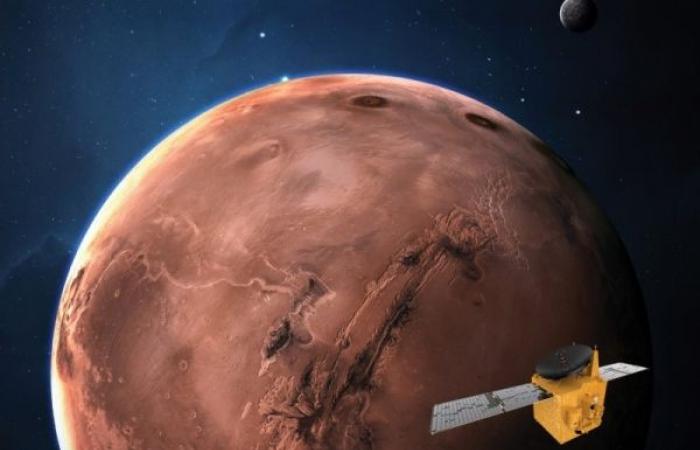 Hind Al Soulia - Riyadh - ABU DHABI — Russia, the first country to land a spacecraft on Mars five decades ago, said on Tuesday the UAE’s Hope Probe reaching the destination point itself is a huge milestone.

In a statement issued to Emirates News Agency (WAM), Roscosmos (the Russian Federal Space Agency) said, "Reaching the destination point itself is a huge milestone for a mission and we most heartily congratulate our Emirati colleagues with the successful accomplishment of this critical task."

Roscosmos made these comments as the Hope Probe’s Mars orbit insertion success is expected to be determined on Tuesday. That delicate phase will decide the success of the first Mars Mission from the Arab world.

"The Hope mission is already a huge success whatever its continuation shall be. It showed the whole world that an ambitious passion backed up by an able leadership can quickly catapult a young nation into a club of the heavy-weight players in one of the most advanced areas of mankind’s activities," the Russian agency added.

"We wish our Emirati colleagues a successful accomplishment of this very important and daring mission," the statement said.

Russia - former Soviet Union - was the first country to land a spacecraft on Mars in 1971 and 1973, which was followed by the US with its eight successful Mars landings between 1976 and 2018.

European Union in 1993 and India in 2014 joined this exclusive club of spacefarers that have successfully made it to Mars.

If the Hope Probe successfully reaches Mars, the UAE will become the fifth member of that elite club.

Asked about the significance of that achievement, Roscosmos said, "We are most happy to welcome the friendly nation of UAE to the club of the deep space exploration nations of the world."

It further explained that "Global space community has a long-term consensus that deep space exploration usually requires broad international cooperation. Interplanetary missions have always been a top-tier task and the more nations acquire those capabilities the more the whole world is benefiting from it."

On the significance of the UAE’s Mars mission, Roscosmos explained that "Interplanetary missions are well-known to be among the most challenging tasks in human space activities. To launch a single mission usually requires many years to spend and huge amount of work to be done. And that’s when the next period of months, years and sometimes decades of persistent meticulous hard work starts."

About the possible contribution of the Hope Probe to Roscosmos’ space missions, the statement said, "We have had some inputs from our scientists that the Hope mission in a number of aspects correlates to some of our future Martian mission plans and having data obtained from various scientific instruments always contributes to a better understanding of any natural phenomenon."

The Roscosmos State Corporation was established in August 2015 to oversee and implement a comprehensive reform of the Russian space industry.

The ExoMars program, a joint endeavor between Roscosmos and the European Space Agency had launched Schiaparelli, a technology demonstration vehicle carried by the ExoMars Trace Gas Orbiter (TGO) to Mars in 2016.

They have postponed the 2020 launch of the second ExoMars mission to the Red Planet to 2022 due to certain technical reasons.

The Hope Probe is expected to enter orbit around Mars — the most dangerous part of its voyage, as the maneuver involves reversing the spacecraft and firing the Hope Probe’s six Delta-V thrusters in a 27-minute burn to rapidly slow down the speed of the spacecraft from 121,000 km/h to 18,000 km/h.

During this phase, Mars Orbit Insertion, contact between the probe and the operations team are kept to a minimum. If it successfully enters Martian orbit, the Hope Probe will transition to the "science phase," and capture and transmit the first photo of Mars within a week.

At that point, it will commence its mission to build the first complete picture of the Martian atmosphere using its three advanced scientific instruments that will continue to relay data of the Red Planet’s atmosphere for one Martian year, equivalent to 687 Earth days.

The mission is expected to collect more than 1,000 GB of new data, which will be shared with over 200 academic and scientific institutions around the world. — WAM

These were the details of the news Russia says ‘Hope Probe reaching destination point itself is a huge milestone’ for this day. We hope that we have succeeded by giving you the full details and information. To follow all our news, you can subscribe to the alerts system or to one of our different systems to provide you with all that is new.