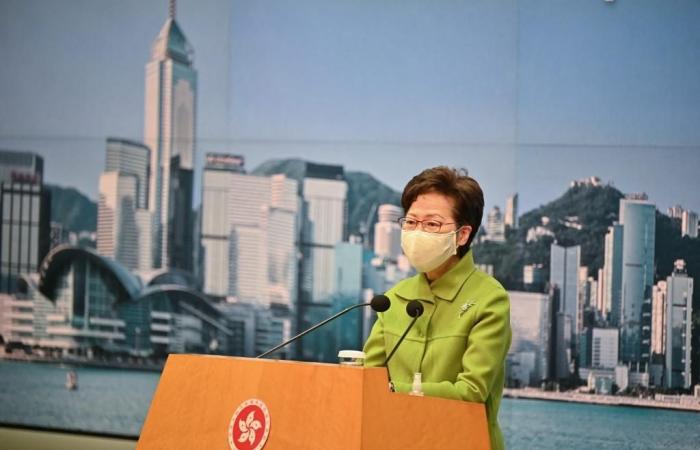 Jeddah - Yasmine El Tohamy - HONG KONG: Hong Kongers with dual nationality are not entitled to foreign consular assistance, the city’s leader said Tuesday, confirming warnings by western diplomats that authorities have begun strictly enforcing Chinese nationality regulations in the finance hub.
Canada’s foreign affairs department announced last week that a dual-national in prison in Hong Kong was required to make a declaration choosing a single nationality.
The revelation sent diplomats from Britain, Canada and the United States scrambling given the potential implications for hundreds of thousands of Hong Kongers in the city with dual nationality — and those who travel there for business and tourism.
On Tuesday, chief executive Carrie Lam confirmed that while residents could own multiple passports, dual nationality was not recognized in Hong Kong under China’s nationality law.
“That (law) has a very specific provision that where people (who) have foreign nationality or right of abode elsewhere... are regarded as Chinese nationals in Hong Kong,” Lam told reporters.
“So likewise, they will not be eligible for consular protection, including consular visits,” she added, unless they have received permission to renounce their Chinese nationality
Beijing’s top-lawmaking body set the rules for implementing national in Hong Kong back in 1996 — the year before Hong Kong’s handover by Britain.
As a result, Hong Kong officials have described the move to reject consular assistance for dual nationals as nothing new.
But western diplomats say there has been a concrete policy change because they had previously had no problem visiting dual nationals in custody.
No Hong Kong official, including Lam, has publicly addressed whether any order has been made to more strictly enforce nationality rules.
But on Monday night, Britain’s consulate changed its travel advice after it said it had been informed that “Hong Kong, like other parts of China, does not recognize dual nationality.”
“If you have both British and Chinese nationality you may be treated as a Chinese citizen by local authorities, even if you enter Hong Kong on your British passport,” the consulate warned.
“If this is the case, the British consulate may not be able to offer you consular assistance.”
The apparent change comes as Beijing clashes with Western nations over its crackdown in the finance hub following 2019’s huge and often violent democracy protests.
The change is most likely to effect ethnic Chinese dual citizens in Hong Kong.
Mainland China has even stricter dual citizenship laws where people are not allowed to own another country’s passport – although many, especially wealthy elites, simply keep that ownership secret.
Last month, the UK began offering extended visas to holders of British National (Overseas) passports, which all Hong Kongers born before the 1997 handover are entitled to.
Beijing responded by announcing it would no longer recognize the passports.

These were the details of the news Hong Kong leader confirms no consular protection for dual nationals for this day. We hope that we have succeeded by giving you the full details and information. To follow all our news, you can subscribe to the alerts system or to one of our different systems to provide you with all that is new.

PREV US denies Iran claims of prisoner deal; UK plays it down
NEXT India's lauds Gulf assistance in fighting COVID-19