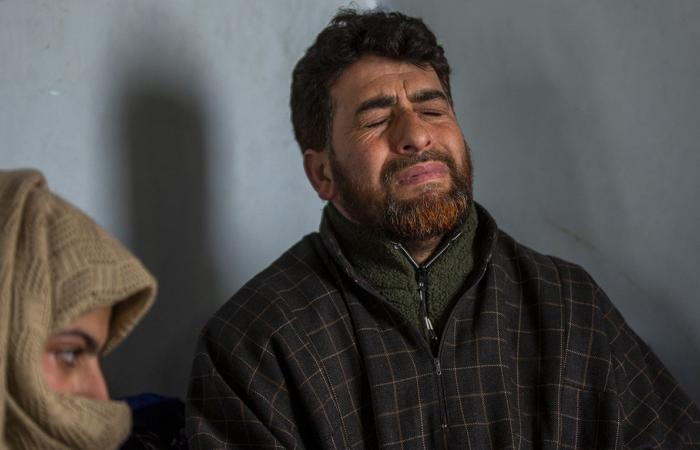 Mushtaq Wani’s son, Athar Mushtaq, 16, was one of three young people killed on Dec. 30 in an alleged gunfight with the army in the Lawaypora area of Baramullah district, on the outskirts of the territory’s capital city, Srinagar.

In a series of statements since the incident, police have maintained that the trio had militant links.

But Wani told Arab News: “I demanded from the authorities whether they have any proof, any footage, or any camera evidence about my son’s nefarious activities. I asked them to show that my son was a militant.”

Despite protests by family members pleading the teenager’s innocence, the local administration buried the three bodies in a remote graveyard more than 100 kilometers away from their native Pulwama district in south Kashmir.

Mushtaq, a grade 11 student, was the only son of Wani, who also has a 14-year-old daughter. The grieving father has made repeated appeals for authorities to release his son’s body for burial in his native
Bellow village.

However, on Sunday, police booked Wani and six of his relatives under various provisions of the Indian Penal Code (IPC). Media reports said they had been charged with “rioting, wrongful restrain, and provocation with an intent to cause a riot.”

Police also booked them under the Unlawful Activities Prevention Act (UAPA), a draconian terror law that does not include a provision for bail.

“There is an FIR (first information report) against an unlawful assembly which indulged in an unlawful act,” Ashish Kumar Mishra, senior superintendent of police for Pulwama, told
Arab News.

Since April, the Indian government has been following a policy of burying victims of “encounter” deaths in unmarked graves, far away from their native villages, depriving families of an opportunity to conduct proper rituals.

This has led to widespread public anger among residents of the valley, forcing the police chief to issue a statement last year that said: “The policy was aimed at stopping the spread of the coronavirus disease (COVID-19).”

Wani said: “I have to bear with this. What can you expect from a repressive regime? They want to punish. We have just demanded the dead bodies. But they have taken it otherwise.”

He added that the catalyst for the police action was a protest in the village mosque after Friday prayers on Feb. 5.

“After Friday’s prayers, I (first) requested the police present at the mosque to give the dead body back and (later) shouted at them. But after leaving the mosque, they filed a case against me. This is repression. If Allah wants that, then we are ready,” he said.

“My only crime is that I demanded the dead body of my son so that I can bury him in the graveyard near my house. I have no other demands, but police say
I protested.”

Srinagar-based human rights lawyer, Habeel Iqbal, said it had been a “cruel” decision to book the family under anti-terror laws.

“A father demanding the dead body of his son is being booked under the anti-terror legislation is an instance where the law is being used as an instrument of oppression to create a sense of fear among citizens, an attempt to create a reign of terror in the minds of ordinary citizens,” he added.

He pointed out that the policy of not returning the “dead bodies of militants” was a “violation of international armed conflict law and humanitarian law.”

Describing the move as “absurd,” Delhi-based Kashmiri activist, Nasir Khuehami, said: “Since they couldn’t silence Mushtaq, they booked him. If the intimidation doesn’t work, they’ll jail him with more fake cases. This is the new Kashmir, where demanding to return a son’s dead body is an unlawful activity.

“Things are going from bad to worse. If the government believes that it can Indianize Kashmir by such acts, then it is living in a fool’s world,” he added.

Anuradha Bhasin, Jammu-based senior journalist and editor of the English newspaper Kashmir Times, said: “This creates more alienations. If you close all space to seeking legal recourse to justice, if you close down all democratic spaces, if you shoot down messengers and those seeking justice then you are creating more alienation and lack of faith in the government.”

Srinagar-based Bharatiya Janata Party (BJP) spokesperson, Manzoor Bhat, said: “Protest is justified if it is within the boundary of nationalism. When you do some activities that go against the national interests, then the police will have to act.

“I heard that Mushtaq gave a provocative speech in the mosque after Friday prayers and that could have disturbed the law and order in the area,” he added.

The disputed region of Kashmir is claimed by both India and Pakistan in full and ruled in part. Both countries have fought two wars over the area.

It faced several new restrictions in August 2019 when New Delhi scrapped Articles 370 and 35A of the constitution, which granted autonomy to the region.

The move was followed by a crackdown on political activity, mass arrests of hundreds of political leaders and activists, and a total lockdown of the region.

Kashmir has yet to have its democratic rights restored. Recently, 4G internet services were restored in the region after more than 17 months of disruption.

These were the details of the news Kashmiri dad charged under anti-terror law for claiming dead son’s body for this day. We hope that we have succeeded by giving you the full details and information. To follow all our news, you can subscribe to the alerts system or to one of our different systems to provide you with all that is new.