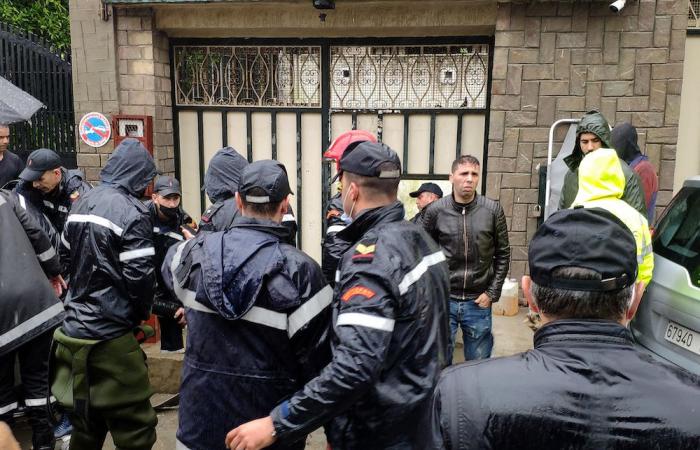 Rescue workers recovered 24 bodies from the basement of the property and rescued 10 survivors, who were taken to hospital, the MAP agency said, citing local authorities.

A search of the premises in the northern city was ongoing.

One government official at the scene said 25 people had died, 17 women and eight men, all aged between 20 and 40, according to a local journalist contacted by AFP.

News footage from the site, broadcast on Moroccan television, showed emergency services carrying corpses out on stretchers under the eyes of clearly traumatised residents, as a stream of ambulances rushed to the scene.

Workers were saved thanks to a local resident who helped them out of the flooded basement with a rope, according to the journalist contacted by AFP, who spoke to witnesses.

Local media outlets indicated at least some of the victims may have been electrocuted as the incoming water interfered with power facilities, but officials had not confirmed this.

A inquiry has been launched to determine the cause of the accident and those responsible, the MAP agency added.

Moroccan lawmakers observed a minute of silence in parliament in memory of the “martyrs of the informal economy”.

Morocco’s informal sector plays a key role in the economy, with over half of the country’s textile and leather production coming from unregulated operations, according to Morocco’s employers’ association.

Many fail to meet official safety standards, it says.

“How can dozens of workers enter the garage of a residential building for years... without the local authorities noticing?” asked local rights group the Northern Observatory for Human Rights.

Morocco registers some 2,000 deaths each year due to work-related accidents, “one of the highest figures” in the Middle East and North Africa, according to the Economic, Social and Environmental Council (CESE).

The country has experienced heavy rains in recent weeks, after a long period of drought.

Fifty people died in floods in 2014 caused by heavy rains in the kingdom’s south.

In September 2019, 24 passengers on a bus were killed when they were caught in a flash flood on a normally dry river bed in the southeastern Errachidia region. — AFP

These were the details of the news At least 24 dead in Morocco underground factory flood for this day. We hope that we have succeeded by giving you the full details and information. To follow all our news, you can subscribe to the alerts system or to one of our different systems to provide you with all that is new.