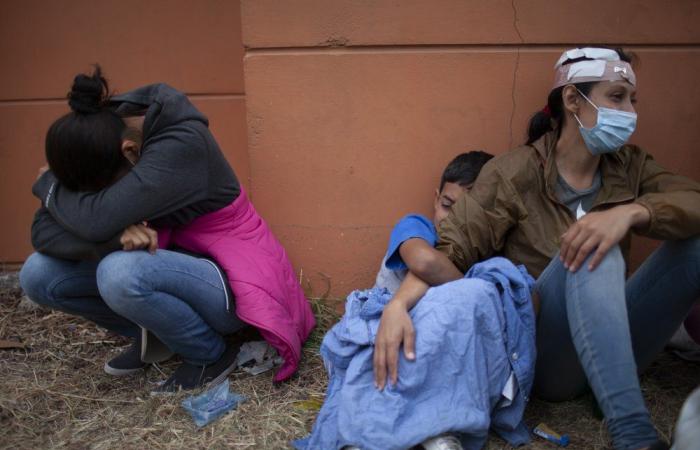 You are now following the details of the Immigrants, activists worry Biden won’t end Trump barriers news and now we leave you with the details

Mohamed Nass - Cairo - HOUSTON (AP) — For nearly 17 months, the Trump administration tried to deport the mother and daughter from El Salvador. The Biden administration may finish the job.

They are being held at a family detention center in remote Dilley, Texas, but have repeatedly been on the verge of deportation. The Friday before Christmas, both were driven to the San Antonio airport and put on a plane, only to be pulled off when lawyers working for immigrant advocacy groups filed new appeals.

“I have faith first in God and in the new president who has taken office, that he’ll give us a chance,” said the mother, who goes by the nickname “Barbi.” Her daughter was 8 when they crossed the US border in August 2019 and will turn 10 in a few weeks. “It’s not been easy.”

President Joe Biden rushed to send the most ambitious overhaul of the nation’s immigration system in a generation to Congress and signed nine executive actions to wipe out some of his predecessor’s toughest measures to fortify the US-Mexico border. But a federal court in Texas suspended Biden’s 100-day moratorium on deportations, and the immigration bill is likely to be scaled back as lawmakers grapple with major coronavirus pandemic relief legislation as well a second impeachment trial for former President Donald Trump.

Even if Biden gets most of what he wants on immigration, fully implementing the kind of sweeping changes he’s promised will take weeks, months — perhaps even years.

That means, at least for now, there is likely to be more overlap between the Biden and Trump immigration policies than many of the activists who backed the Democrat’s successful presidential campaign had hoped.

“It’s important that we pass policies that are not only transformative, inclusive and permanent but also that they are policies that do not increase the growth of deportation,” said Genesis Renteria, programs director for membership services and engagement at Living United for Change in Arizona, which helped mobilized Democratic voters in the critical battleground state. “Our organizations will continue to hold the administration accountable.”

Federal law allows immigrants facing credible threats of persecution or violence in their home country to seek US asylum. Biden has ordered a review of Trump policies that sent people from Central America, Cuba and other countries to Mexico while their cases were processed — often forcing them into makeshift tent camps mere steps from American soil. He also has formed a task force to reunite immigrant children separated from their parents and halted federal funding to expand walls along the US-Mexico border.

On Saturday, the Biden administration said it was withdrawing from agreements with El Salvador, Guatemala and Honduras that restricted the ability of people to seek US asylum.

But those orders likely won’t help Barbi and her daughter. They sought asylum but were denied because of a Trump administration rule barring such protections for people who crossed another country to reach the US border — in their case Guatemala and Mexico.

That measure was struck down by a federal appeals court, shielding them from deportation so far.

Still, Barbi and her daughter, like others who have been held for months at Dilley, could be removed from the county at any time, perhaps even in the coming days. Elsewhere in the facility run by Immigration and Customs Enforcement, a dozen Hondurans were told to pack this past week, but not actually deported — yet.

“It’s very traumatic,” said Barbi, who left behind two other children in El Salvador and asked that her real name not be revealed so as not to draw the attention of criminal gangs there. “My daughter cries and says, ‘Why won’t they let us out?’”

As a candidate last summer, Biden suggested he’d do just that, declaring, “Children should be released from ICE detention with their parents immediately.”

Advocates who originally commended Biden for championing immigration reform now worry that not enough will be done. Omar Jadwat, director of the American Civil Liberties Union’s Immigrants’ Rights Project, called it “troubling” that Biden’s efforts “did not include immediate action to rescind and unwind more of the unlawful and inhumane policies that this administration inherited — and now owns.”

“We are tired, as Latinos and immigrants, that there is always another priority,” said Héctor Sánchez Barba, executive director and CEO of Mi Familia Vota, which led voting drives in Hispanic communities ahead of the November election. “Immigration should remain the top priority, especially given how our community was devastated, attacked, separated.”

Antonio Arellano, interim executive director of Jolt Action, which seeks to build the power and influence of young Latinos in Texas, said political pressure is already mounting as conservative forces mobilize to retake the House and Senate for Republicans in 2022.

“There will be electoral consequences if we fail to deliver,” Arellano said.

Biden administration officials have pleaded for more time, saying that Trump’s policies are too wide-reaching to be rescinded overnight. But simply returning to pre-Trump practices — if Biden is able to actually achieve that — won’t be enough for many activists.

President Barack Obama was called the “deporter-in-chief” for removing a record number of immigrants during his eight years in office. His administration also built the detention center where Barbi is being held, as well as a similar facility in equally rural Karnes City, Texas, 95 miles to the east.

Biden has banned private prisons, but his order doesn’t apply to lockups like those in Dilley and Karnes City. Far from advocating their closure previously, Biden as vice president flew to Guatemala during a 2014 surge of unaccompanied minors heading to the US border and personally warned that his country would increase detention of families — which the Obama administration subsequently did.

Trump tried to seize on the issue during the presidential campaign, chiding Biden for being a part of an administration that originally put “kids in cages.”

Biden responded that the Obama White House “took too long” to get immigration policy right, pointing to reform policies implemented later. As president, Biden already has taken steps to preserve some of those, including Obama-era legal protections for immigrants brought to the US as children, while the legislation the president is promoting would provide a pathway to citizenship for the estimated 11 million people living in the country illegally.

Those date to last March, when Vice President Mike Pence, then head of the White House coronavirus task force, ordered the implementation of emergency health measures that sought to effectively bar immigrants entry into — or to impose their speedy removal from — the US to prevent the virus’ spread. Those restrictions have remained despite immigrants’ pending asylum clams and little evidence that sealing borders slows the pandemic.

Some immigrants were sent to Karnes City because of the health order. But many others, especially from Central America, were expelled to Mexico. Federal authorities have now used pandemic health restrictions on the border to remove more than 183,000 immigrants since October. The number would have been even higher had not a federal court forbid removing unaccompanied immigrant children from the U.S, in November.

Expulsions under health limits at the border have continued unabated under Biden. A White House spokesperson said the goal was to return the full US asylum process back to a pre-Trump normal “as much as possible,” but noted that “we are living in the confines of the pandemic,” which specifically limits “intake and processing” of asylum seekers at the border.

Kennji Kizuka, a senior researcher and policy analyst for refugee protection at Human Rights First, said “with people who are in danger, the US has a legal obligation to not return them to a place where they would face persecution, or torture or other harm.”

“That’s not something you can defer because it’s inconvenient in your policy plan,” Kizuka said. “It’s both US law and our treaty obligations, so you can’t pass for that while you’re thinking about how to reform the system.”

Biden’s pledges to make quick improvements had raised hopes that are now fading along the border. The day before his Jan. 20 inauguration, immigrants staged a protest in the Mexican city of Nogales that ended with some heading to a border crossing into Arizona and asking to be processed for US asylum.

A Customs and Border Protection officer said no but added, “Try again tomorrow.”

“We went back the next day,” said Joanna Williams, director of education and advocacy for the Kino Border Initiative, which provides humanitarian assistance to immigrants and participated in the demonstration. “Of course they didn’t process them that day, either.”

By WILL WEISSERT and NOMAAN MERCHANT

Image: FILE – In this Jan. 17, 2021, file photo injured women, part of a Honduran migrant caravan in their bid to reach the US border, weep as they sit on the side of a highway after clashing with Guatemalan police and soldiers in Vado Hondo, Guatemala, Guatemala. US Federal law allows immigrants facing credible threats of persecution or violence in their home country to seek US asylum. (AP Photo/Sandra Sebastian, File)

These were the details of the news Immigrants, activists worry Biden won’t end Trump barriers for this day. We hope that we have succeeded by giving you the full details and information. To follow all our news, you can subscribe to the alerts system or to one of our different systems to provide you with all that is new.