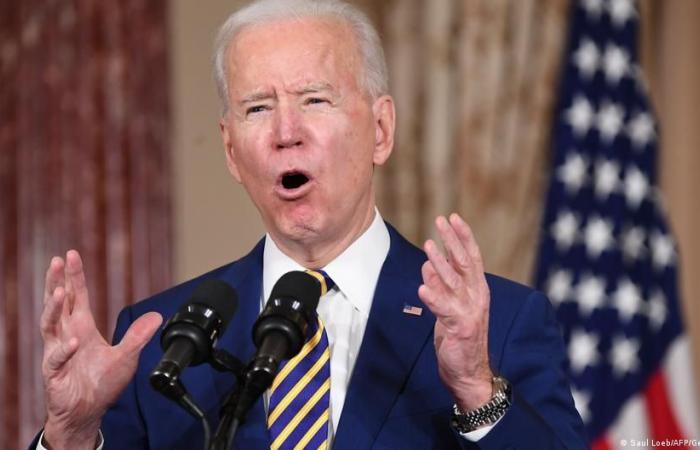 Mohamed Nass - Cairo - US President Joe Biden confirmed Sunday that he would not lift sanctions against Iran  until it complies with the nuclear deal.

Biden responded with a clear “No” when the television network CBS asked if the US would “lift sanctions first, in order to get Iran back to the negotiations table.”

When further asked if lifting sanctions was conditional to Iran “first stop enriching uranium,” Biden nodded in affirmation in the interview recorded on Friday.

Iran stopped adhering to its key nuclear commitments after the former US President Donald Trump pulled out of the 2015 Joint Comprehensive Plan of Action (JCPOA), also referred to as the Iran nuclear deal, and reimposed sanctions on Tehran.

In January, Iran announced lifting up its uranium enrichment process to 20 percent purity, bypassing the 3.67 percent level that was in the deal.

Washington and Iran expressed interests in reviving the 2015 deal since Biden took office last month, but both parties insist on their own terms.

Iranian Foreign Minister Mohammad Javad Zarif said on Sunday that Iran receiving compensation from the US for Trump’s withdrawal from the nuclear deal was not a “precondition” for reviving the agreement.

The Supreme Leader of Iran Ayatollah Ali Khamenei had said on Sunday that Tehran would return to the 2015 nuclear deal if the US lifted all imposed sanctions.

“If they want Iran to return to its commitments … America must completely lift sanctions, and not just in words or on paper,” Khamenei said in a televised address to air force commanders.

Khamenei’s comments came the same day that the UN special envoy on Yemen visited Iran to support efforts to negotiate a political solution to the conflict considered by many to be a proxy war between Iran and Saudi Arabia.

These were the details of the news Joe Biden says US won’t lift Iran sanctions for this day. We hope that we have succeeded by giving you the full details and information. To follow all our news, you can subscribe to the alerts system or to one of our different systems to provide you with all that is new.