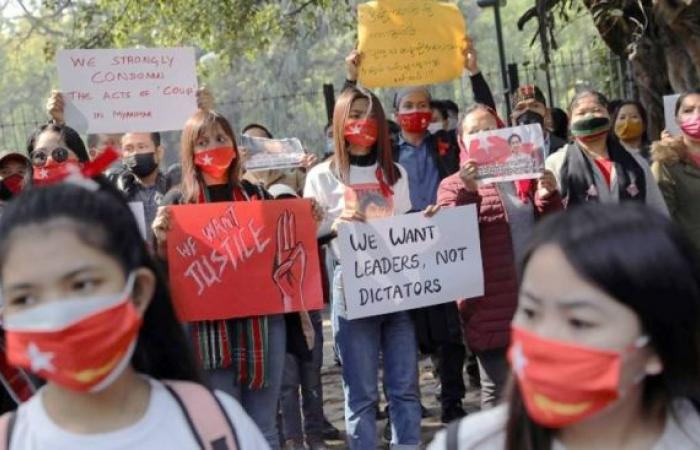 Hind Al Soulia - Riyadh - YANGON — Tens of thousands of protesters overcame a post-coup Internet blackout as they took to the streets of Myanmar's largest city for a second consecutive day on Sunday, demanding the release of deposed civilian leader Aung San Suu Kyi.

A witness in the former capital Yangon told CNN the crowd on Sunday mostly consisted of young people and appeared to be significantly larger and better organized than Saturday's protest. Public participation also looked to be growing, according to witnesses. Reuters said tens of thousands were in the streets.

Protest crowds have grown bigger and bolder since Monday's coup. AFP reported that Sunday's demonstrations brought tens of thousands onto the streets.

In Yangon people tried to gather in front of the city hall, but access to the area was blocked off by barricades. Several groups marched in the city where riot police were deployed in large numbers. No clashes were reported.

Union activists, students and others numbering at least 2,000 according to AP chanted “Long live Mother Suu” and “Down with military dictatorship” at a major intersection near Yangon University. They marched along a main road, snarling traffic. Drivers honked their horns in support.

There too, police in riot gear blocked the main entrance to the university. Two water cannon trucks were parked nearby. Protesters on Sunday have been marching around the Yangon University area, changing directions to avoid roadblocks and any confrontations with police. A witness has seen several police trucks in the area.

The protesters held placards calling for freedom for Suu Kyi and President Win Myint, who were put under house arrest and charged with minor offenses, seen by many as providing a legal veneer for their detention.

Many in the crowd gave the three-fingered salute — a reference to the Hunger Games movies and popular symbol of recent pro-democracy protests in neighboring Thailand that have since been adopted in Myanmar.

Resistance to the coup had initially proved limited, due in part to widespread communications difficulties, as well as fears of a further crackdown.

Internet monitoring service NetBlocks said Saturday that the country was in the midst of a second "national-scale" Internet blackout as the military attempted to secure its grip on power.

According to NetBlocks, real-time network data showed connectivity had fallen to 16% of ordinary levels and users had reported difficultly getting online.

Communication between protesters Sunday was largely through SMS texts, phone calls, and word of mouth, according to a witness in Yangon. On Saturday, crowds announced where to gather Sunday, resulting in apparently improved organization, the witness said.

Despite fear of repression in a country used to bloody crackdowns by the military such as those in 1988 and 2007, people took to the streets early in the morning, some banging saucepans in a show of defiance.

Despite the army's order to block the Internet and social media, Sunday's demonstration in Yangon was streamed live on Facebook, bringing messages of support such as "you are our heroes" and "respect the protesters".

"The generals are now attempting to paralyze the citizen movement of resistance — and keep the outside world in the dark — by cutting virtually all Internet access," said Tom Andrews, UN special rapporteur on human rights in Myanmar.

More arrests have been reported, with over 160 people detained according to a campaign group for political prisoners, based in Yangon.

Those held include Sean Turnell, an Australian economic adviser to Suu Kyi, in what looks like the first arrest of a foreigner in Myanmar. The 75-year-old economist from Macquarie University said he feared being "accused of something" but was "not guilty of anything".

The sudden seizure of power came as the new Parliament was due to open and after months of increasing friction between the civilian government and the powerful military, known as the Tatmadaw, over alleged election irregularities. The country's election commission has repeatedly denied mass voter fraud took place.

Hundreds of NLD lawmakers were detained in the capital Naypyitaw Monday, where they had traveled to take up their seats. The junta has since removed 24 ministers and deputies from government and named 11 of its own allies as replacements who will assume their roles in a new administration.

Monday's coup has been widely condemned internationally, with the United States calling on Myanmar's military leaders to "immediately relinquish the power they have seized, release the activists and officials they have detained, lift all telecommunications restrictions, and refrain from violence against civilians."

The US Embassy called on the military to give up power and restore the democratically elected government, release those detained, lift all telecommunications restrictions, and refrain from violence.

“We support the right of the people of Myanmar to protest in support of the democratically elected government and their right to freely access information,” it said in a tweet.

Sunday's rally came a day after about 1,000 people — factory workers and students prominent among them — marched in Yangon. More than 100 riot police met them and no violence was reported.

Similar-sized demonstrations took place in at least two other areas of Yangon as well as in Mandalay, the second-largest city. At Yangon’s City Hall, protesters presented flowers to police. — Agencies

These were the details of the news Thousands turn out on second day of Myanmar protests despite Internet blackout for this day. We hope that we have succeeded by giving you the full details and information. To follow all our news, you can subscribe to the alerts system or to one of our different systems to provide you with all that is new.