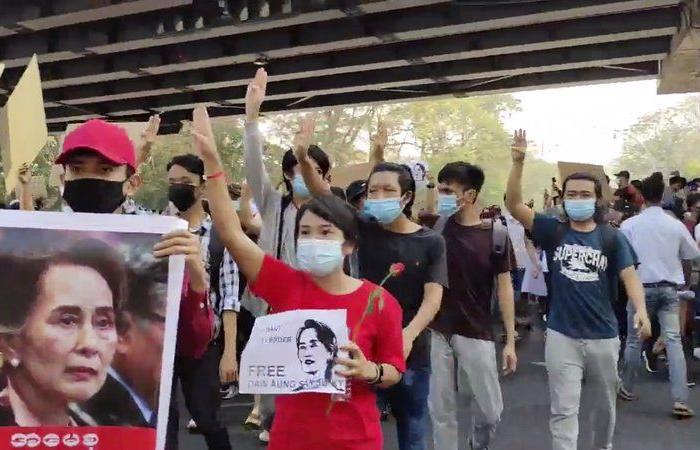 Mohamed Nass - Cairo - YANGON, Myanmar (AP) — Thousands of people rallied against the military takeover in Myanmar’s biggest city on Sunday and demanded the release of Aung San Suu Kyi, whose elected government was toppled by the army that also imposed an internet blackout.

Protest crowds have grown bigger and bolder since Monday’s coup.

At least 2,000 labor union and student activists and members of the public chanted “Long live Mother Suu” and “Down with military dictatorship” at a major intersection near Yangon University. They marched along a main road, snarling traffic. Drivers honked their horns in support.

Police in riot gear blocked the main entrance to the university. Two water cannon trucks were parked nearby.

The protesters held placards calling for freedom for Suu Kyi and President Win Myint, who were put under house arrest and charged with minor offenses, seen by many as providing a legal veneer for their detention.

The U.S. Embassy called on the military to give up power and restore the democratically elected government, release those detained, lift all telecommunications restrictions, and refrain from violence.

“We support the right of the people of Myanmar to protest in support of the democratically elected government and their right to freely access information,” it said in a tweet.

The communication blockade is a stark reminder of the progress Myanmar is in danger of losing after Monday’s coup plunged the nation back under direct military rule after a nearly decade-long move toward greater openness and democracy. During Myanmar’s previous five decades of military rule, the country was internationally isolated and communication with the outside world strictly controlled.

Suu Kyi’s five years as leader since 2015 had been Myanmar’s most democratic period despite the military retaining broad powers the continued use of repressive colonial-era laws and the persecution of minority Rohingya Muslims.

Sunday’s rally came a day after about 1,000 people — factory workers and students prominent among them — marched in Yangon. They were met by more than 100 riot police.

There was no violence reported. Similar-sized demonstrations took place in at least two other areas of Yangon as well as in Mandalay, the second-largest city. At Yangon’s City Hall, protesters presented flowers to police.

Nearly 300 elected lawmakers from Suu Kyi’s National League for Democracy party were supposed to have taken their seats last Monday in a new session of Parliament following November elections when the military announced it was taking power for a year.

The military accused Suu Kyi and her party of failing to act on its complaints that last the election was marred by fraud, though the election commission said it had no found no evidence to support the claims.

The lawmakers met in an online meeting Friday to declare themselves as the sole legitimate representatives of the people and asked for international recognition as the country’s government.

U.N. Secretary-General Antonio Guterres pledged the United Nations will do everything it can to unite the international community and create conditions for the military coup in Myanmar to be reversed.

These were the details of the news Thousands protest army takeover in Myanmar’s biggest city for this day. We hope that we have succeeded by giving you the full details and information. To follow all our news, you can subscribe to the alerts system or to one of our different systems to provide you with all that is new.