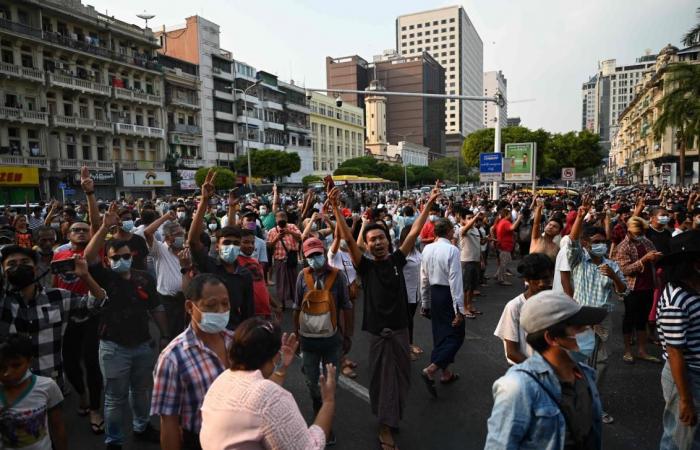 Jeddah - Yasmine El Tohamy - KUALA LUMPUR: Rohingya refugees in Malaysia say they have been “left in the dark” over their future after last week’s military coup in Myanmar.
On Feb. 1, armed forces chief Min Aung Hlaing overthrew Myanmar’s government, seizing Aung San Suu Kyi and other leaders, before declaring a state of emergency and announcing military rule over the country for a year.
Mohamed Ayub, a 31-year-old Rohingya refugee from Klang, told Arab News that the coup “came as a shock” and that the refugee community had not received any updates from Myanmar since the overthrow.
“We aren’t stuck here as we are seeking shelter, but the situation will get more difficult for us even with help from a non-governmental organization,” he said.
He added that his family members were “safe” in Myanmar and there was nothing else he could do “except wait for some updates.”
Ayub arrived in Malaysia on a boat eight years ago. Due to the risks of the journey, he decided to travel alone, to pursue a better life for all, leaving behind his father and siblings in Myanmar.
Today, the Rohingya refugee considers the Southeast Asian nation home.
However, with the Rohingya becoming increasingly prominent in the country, certain sections of society have begun to view them as a social, economic and security threat.
While Malaysia is not a signatory of the 1951 Refugee Convention or its subsequent 1967 Protocol, it currently hosts 100,000 Rohingya refugees, the largest in the ASEAN and the fourth-highest globally.
Most the Rohingya fled Myanmar in 2017 due to conflicts in the Rakhine state.
Over the years, the Rohingya community in Malaysia has faced discrimination, a recent report by Tenaganita, a non-governmental organization that works to protect migrant rights, said.
The report added: “In Malaysia, the previous welcoming tone toward refugees has now shifted, with heightened hate speech and xenophobic treatment.”
When the country reporting a spike in coronavirus cases, most of the infections were traced to the Rohingya community with “their poor living conditions blamed for being one of the reasons for the widespread disease,” Malaysian Heath Director-General Mohd Noor Hisham Abdullah said.
“The congested environment in the units could be one of the factors in the spread of COVID-19,” he told a press conference.
However, the Feb. 1 coup has added to the community’s challenges.
On Friday, the National League for Democracy (NLD) in Malaysia condemned the takeover, saying it was an “act of disgrace” for the history of the state and Myanmar.
The NLD listed two demands: The immediate release of President U Win Myint, Suu Kyi and other detainees.
Suu Kyi led the NLD to victory in 2015, in Myanmar’s first openly contested elections in 25 years. However, while she remains widely popular in Myanmar, her image suffered on the global stage due to her handling of the Rohingya crisis and treatment of the Muslim minority.
The army accuses the NLD of electoral fraud, citing poll irregularities.
However, the NLD, however, maintains that its landslide victory and participation in the polls complied with democratic norms and the 2008 constitution.
“The reform process is to strengthen the root in a democracy which is already gaining momentum, and the coup hinders the continuation of democratic federalism,” the NLD said.
NLD Chairman Than Phe Lay, citing issues faced by the Rohingya, has also submitted a letter to the UN High Commissioner for Refugees (UNHCR), criticizing the military coup after flights between Kuala Lumpur and Yangon were suspended.
“The refugees are in a lot of trouble as some of them were sent back to detention centers because airports are shut,” Than said.
Malaysia has six immigration detention centers where undocumented migrants are held.
Meanwhile, Sultan Bolkiah, chairman of the Association of Southeast Asian Nations (ASEAN), said that member states were “monitoring developments” in Myanmar.
“We recall the purposes and the principles enshrined in the ASEAN charter, including the adherence to the principles of democracy, the rule of law and good governance, and respect for and protection of human rights and fundamental freedoms,” he said.
Malaysia has said it will continue to advocate for peace and stability in Myanmar.
“Malaysia reaffirms the strong support for Myanmar’s democratic transition, the peace process and inclusive economic development,” the foreign ministry said.
However, experts say that ASEAN members “should not be involved in criticism of the Myanmar government.”
“Malaysia has been vocal about Myanmar, particularly the process of democracy. Three years ago, for the first time in ASEAN history, Kuala Lumpur voiced its concern directly to Myanmar, especially regarding the Rohingya, and several ASEAN countries, especially Indonesia and Singapore, are also very critical of Myanmar,” Azmi Hassan, a geostrategy professor at the Universiti Teknologi Malaysia, told Arab News.
“I think the Rohingya issue is the driving force since Malaysia and Indonesia is the target destination. Things could get worse in Rakhine, and probably will, since communication to the outside world from Myanmar is at a bare minimum.”

These were the details of the news Malaysia’s Rohingya ‘in shock’ after Myanmar coup for this day. We hope that we have succeeded by giving you the full details and information. To follow all our news, you can subscribe to the alerts system or to one of our different systems to provide you with all that is new.