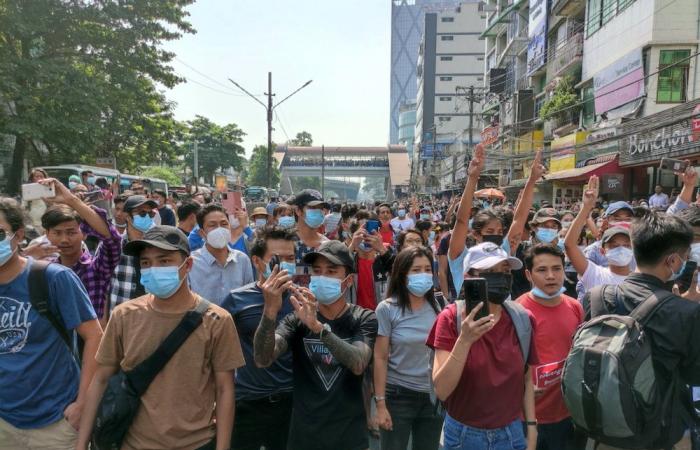 YANGON, Feb 6 ― Myanmar saw its largest anti-coup protests yet today with young demonstrators spilling on to the streets to denounce the country’s new military regime, despite a nationwide internet blackout aimed at stifling a growing chorus of popular dissent.

Soon before nearly all lines of communication in and out of the country went dark, an Australian advisor to ousted civilian leader Aung San Suu Kyi told media he had been detained.

The shutdown did not stop thousands of demonstrators from gathering across Myanmar’s largest city on Saturday, beginning on a road near Yangon University where many flashed the three-finger salute that has come to symbolise resistance to the army takeover.

“Down with the military dictatorship!” crowds yelled, many donning red headbands ― the colour associated with Suu Kyi’s National League for Democracy party.

At least two other groups of demonstrators marched south to downtown Yangon’s Sule Pagoda, carrying posters of Suu Kyi and president Win Myint to call for their release.

The protests ended by dusk, and demonstrators have vowed to return to the streets tomorrow.

Further north in Mandalay, as many as 2,000 people were also protesting, AFP reporters on the ground said.

All were out to condemn dawn raids that brought a sudden halt to the country’s 10-year experiment with democracy on Monday, just as lawmakers elected in national polls last November were due to sit in parliament for the first time.

“They don’t respect our people’s votes and I think they are betraying the country,” one protester told AFP. “Our revolution starts today.”

“I’m just being detained at the moment, and perhaps charged with something. I don’t know what that would be,” Turnell, a longtime economic advisor to the Nobel laureate, told the BBC.

Online calls to protest the army takeover have prompted bold displays of defiance, including the nightly deafening clamour of people around the country banging pots and pans ― a practice traditionally associated with driving out evil.

“We only want the elected government of the parties that won the election,” said a street vendor Kyi Lwin late Friday night.

“We reject this kind of military dictatorship.”

Some have shown their opposition in group photographs with banners decrying the coup and flashing a three-finger salute earlier adopted by democracy protesters in neighbouring Thailand.

UN Secretary General Antonio Guterres said a special envoy to the country had made “first contact” with Myanmar’s deputy military commander to urge the junta to return power to the civilian government.

State media in Myanmar reported today that officials had spoken with diplomats the previous day to respond to the international outcry.

As protests gathered steam, the junta ordered telecom networks to freeze users out of access to Facebook, arguably the country’s main mode of communication.

“We strongly urge the authorities to order the unblocking of all social media services,” a Facebook representative said.

“The people of Myanmar need access to important information and to be able to communicate with their loved ones.”

The platform had hosted a rapidly growing “Civil Disobedience Movement” forum calling for strikes at civil service offices and hospitals.

The military widened its efforts to stifle dissent on Friday when it demanded new blocks on other social media services including Twitter.

Norway-based Telenor said today it had complied with an order instructing telecoms to shut down the country’s entire mobile data network.

“We have employees on the ground and our first priority is to ensure their safety,” a statement from the firm said.

Some internet-savvy users had managed to circumvent the social media block with VPN services but by midday online traffic had slowed to a standstill.

“People in Myanmar have been forced into a situation of abject uncertainty,” said Ming Yu Hah of Amnesty.

“An expanded internet shutdown will put them at greater risk of more egregious human rights violations at the hands of the military,” she added.

An immensely popular figure despite a tarnished reputation in the West, Suu Kyi has not been seen in public since the coup, but a party spokesman said Friday she was under house arrest and “in good health”.

US President Joe Biden was among world leaders this week to demand the generals “relinquish power... release advocates and activists and officials they have detained, lift the restrictions in telecommunications, and refrain from violence”. ― AFP

These were the details of the news Myanmar anti-coup protests grow as army broadens internet crackdown for this day. We hope that we have succeeded by giving you the full details and information. To follow all our news, you can subscribe to the alerts system or to one of our different systems to provide you with all that is new.