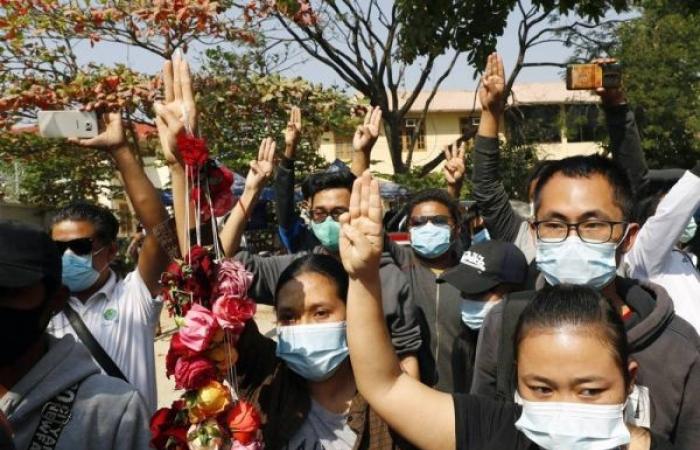 Hind Al Soulia - Riyadh - YANGON — Myanmar’s junta shut down the Internet in the country on Saturday as thousands of people took to the streets of Yangon to denounce this week’s coup and demand the release of elected leader Aung San Suu Kyi.

Many in the crowd wore red, the color of Suu Kyi’s National League for Democracy (NLD), which won Nov. 8 elections in a landslide, a result the generals have refused to recognize claiming fraud.

As the protest swelled and activists issued calls on social media for people to join the march, the country’s Internet crashed.

Factory workers and students were prominent among the protesters who marched near a university in Myanmar's economic capital. By noon, more than 100 police in riot gear had been deployed to block them from moving ahead.

The protesters numbered around 3,000, AFP estimated. It was the boldest showing yet in the city by those opposed to the military takeover and appears to indicate a growing willingness to confront the new regime head-on.

Posing for a picture, more than two dozen lawyers donned red ribbons and showed the three-fingered protest salute. They held a banner reading: "We condemn the unlawful coup; No to dictatorship."

Earlier Friday, nearly 300 elected lawmakers from Suu Kyi’s National League for Democracy party declared themselves as the sole legitimate representatives of the people and asked for international recognition as the country’s government.

They were supposed to take their seats Monday in a new session of Parliament following November elections when the military announced it was taking power for a year.

The military accused Suu Kyi and her party of failing to act on its complaints that the election was fraudulent, though the election commission said it had no found no evidence to support the claims.

Many had sidestepped the ban on sites such as Facebook by using virtual private networks to conceal their locations, but the more general disruption to mobile data services would severely limit access to independent news and information.

“Internet already down but we will not stop raising our voice,” wrote a Twitter user with the handle Maw Htun Aung. “Let’s fight peacefully for democracy and freedom. Let’s fight until the last minute for our future.”

In a statement, Twitter said it is “deeply concerned” about the order to block Internet services in Myanmar and vowed to “advocate to end destructive government-led shutdowns.”

“It undermines the public conversation and the rights of people to make their voices heard,” its spokesperson said.

“By complying with their directives, your companies are essentially legitimizing the military’s authority, despite international condemnation of this very body,” a coalition of groups said in a statement.

Telenor said before the Internet shutdown it was legally obliged to follow the order to block some social media, but “highlighted the directive’s contradiction with international human rights law.”

Army chief Min Aung Hlaing seized power alleging fraud although the electoral commission says it has found no evidence of widespread irregularities in the November vote. The junta announced a one-year state of emergency and has promised to hand over power after new elections, without giving a timeframe.

There were also anti-coup protests in Melbourne, Australia, and the Taiwanese capital Taipei on Saturday.

A civil disobedience movement has been building in Myanmar all week, with doctors and teachers among those refusing to work, and every night people bang pots and pans in a show of anger.

For the fourth night Friday, the cacophony of noise from windows and balconies reverberated through Yangon neighborhoods, as resistance to the coup and arrests of activists and politicians gathered steam.

In addition to about 150 arrests in the wake of the coup reported by human rights groups, local media said around 30 people have been detained over the noise protests.

In New York, Secretary-General Antonio Guterres pledged Friday that the United Nations will do everything it can to unite the international community and create conditions for the military coup in Myanmar to be reversed.

He told a news conference it is “absolutely essential” to carry out the Security Council’s calls for a return to democracy, respect for the results of the November elections, and release of all people detained by the military, “which means the reversal of the coup that took place.”

Myanmar was under military rule for five decades after a 1962 coup, and Suu Kyi’s five years as leader since 2015 had been its most democratic period despite continued use of repressive colonial-era laws and persecution of minority Rohingya Muslims. — Agencies

These were the details of the news Myanmar junta shuts down Internet as protests spread for this day. We hope that we have succeeded by giving you the full details and information. To follow all our news, you can subscribe to the alerts system or to one of our different systems to provide you with all that is new.