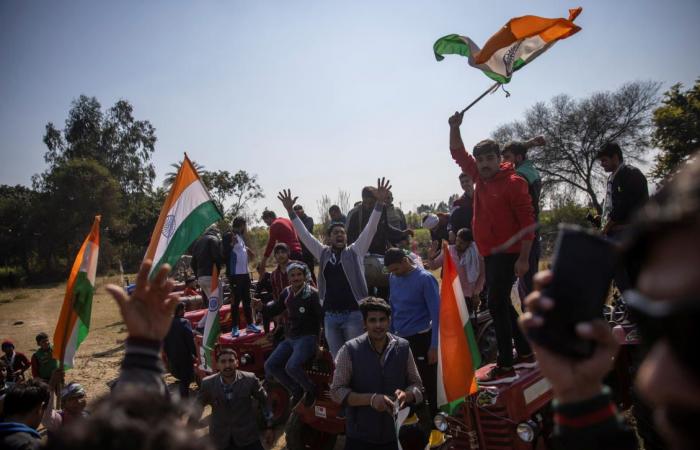 Jeddah - Yasmine El Tohamy - BHAINSWAL, India: Thousands of farmers in a politically important Indian state on Friday rallied in opposition to new agricultural laws, signalling growing support for a months-long campaign to have the government reforms scrapped.
Angry at what they see as legislation that benefits private buyers at the expense of growers, tens of thousands of farmers have been camped on the outskirts of the capital, New Delhi, for more than two months, calling for the withdrawal of laws introduced in September.
Much of the initial support for the protests has come from rice and wheat growers from northern India, particularly opposition-ruled Punjab state.
But in a sign of a growing challenge to the government of Prime Minister Narendra Modi, more than 10,000 farmers from across the political and religious spectrum rallied on Friday in Uttar Pradesh state to show their support for the protests.
Ramkumar Choudhary, a local leader from Bagpat district, told the crowd of Hindu and Muslim farmers in Bhainswal village thousands more would head to Delhi unless the government rolled back the laws.
“Only 1% of people have come out of the villages so far. The day we send 50% of our people, there will be no place to move in Delhi,” he said.
Devender Singh, a sugarcane farmer who attended the rally, said the agitation was drawing widespread support.
“100% farmers from all communities are joining the protest,” he said, “Farmers are unable to make ends meet.”
Hundreds of police, many armed and wearing riot gear, stood by but there was no trouble.
Uttar Pradesh is India’s largest state and a critical battleground state in elections.
While Modi’s party commands a comfortable majority in parliament, the support for the protests from Uttar Pradesh’s politically influential sugarcane farmers will be a worry.
The farmers say the laws mean the end of long-standing support prices for their crops and will leave them vulnerable to the whims of big buyers. They are demanding that the laws be annulled.
The government says reform of the inefficient agriculture sector will open up new opportunities for farmers and while it has offered some concessions, it has ruled out withdrawing the laws.
The protests have been largely peaceful but flared into turmoil on Jan. 26 as some farmers clashed with police in New Delhi and one person was killed and hundreds were injured.
To the government’s annoyance the protests have drawn increasing international scrutiny, with celebrities including pop star Rihanna and environment campaigner Greta Thunberg announcing their support for the farmers.

These were the details of the news Indian protests against agriculture reforms attract new supporters for this day. We hope that we have succeeded by giving you the full details and information. To follow all our news, you can subscribe to the alerts system or to one of our different systems to provide you with all that is new.