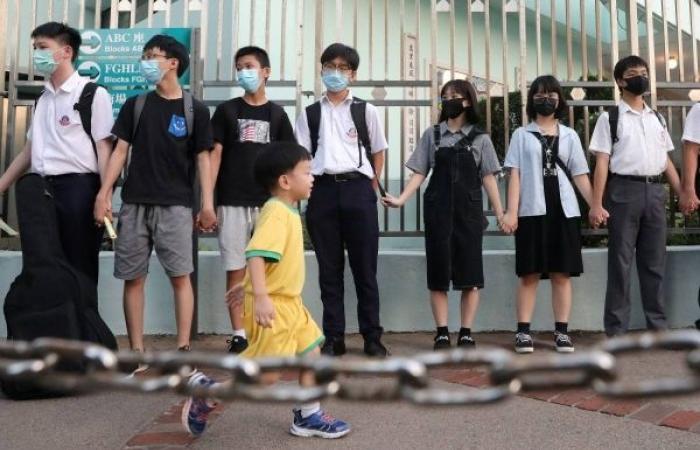 For years, parents and students in the semi-autonomous city have feared a shift toward China-style "patriotic education," with a previous attempt to introduce such a curriculum defeated by mass protests in 2012. The new rules, coming in the wake of both the new security law and a crackdown on the city's opposition movement, go far beyond what was previously mooted.

In a circular issued to schools on Thursday, the city's Education Bureau (EDB) said that "as far as national security is concerned, there is no room for debate or compromise."

A spokesman for the bureau said that in accordance with the national security law, "preventive efforts should be accorded priority in order to minimize the need for suppression and punishment."

"Schools have a significant role to play" in this, he added.

Speaking at a news conference on Thursday, Ip Kin-yuen, a former lawmaker and vice chairman of the Professional Teachers' Union, criticized the government for announcing the new policies without consulting teachers and parents.

"There is a lot of sensitivity and unpredictability when it comes to national security law education," he said. "It will bring about huge pressure and anxiety among principals and teachers."

The new policies are outlined in a series of circulars as well as new teaching materials, including videos, picture books, and graphics, with cartoon Chinese soldiers and local police officers helping students understand their "responsibilities" under the security law.

They go into granular detail over how national security issues should be taught across a range of subjects, from general studies and history to biology and music, as well as how administrators and teachers should handle discipline issues and failure to respect the new guidelines.

Both teachers and students who contravene the rules face potential censure, with administrators advised to involve the police in the event of "serious" offenses, while books and other materials deemed to be contrary to national security are to be removed from school grounds, though little precise guidance is offered for what materials are covered.

"If an employee is found to have committed any act of disrespecting the country, the school should give appropriate advice or warning, and pay attention to this employee's future performance accordingly," the rules state.

Students, both university and high school, were at the forefront of anti-government, pro-democracy protests which rocked Hong Kong for much of 2019. During the unrest and in the run-up to the national security law being introduced, many pro-government figures blamed the city's liberal education curriculum, as well as teachers, for supposedly radicalizing the city's young people. — Courtesy CNN


These were the details of the news Hong Kong introduces sweeping national security rules for schools for this day. We hope that we have succeeded by giving you the full details and information. To follow all our news, you can subscribe to the alerts system or to one of our different systems to provide you with all that is new.