In Saddam strongholds that fought America, Iraqis fear a US departure 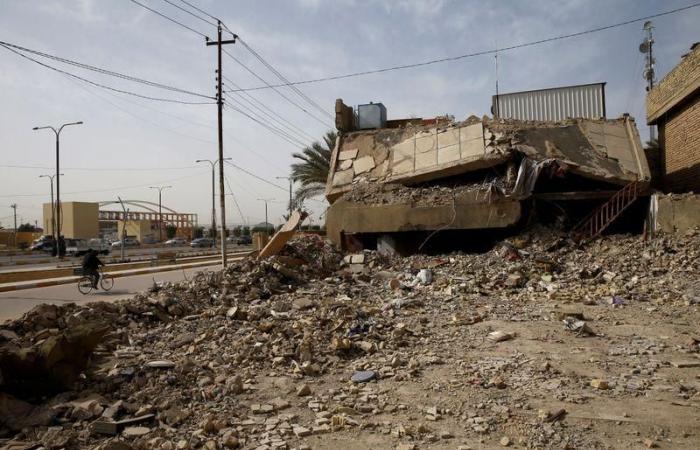 You are now following the details of the In Saddam strongholds that fought America, Iraqis fear a US departure news and now we leave you with the details

Mohamed Nass - Cairo - Over the past 17 years, the municipal employee has watched his city fall to the United States, al Qaeda, Islamic State and, most recently, Iraqi forces fighting alongside Iran-backed paramilitaries. Ibrahim said the presence of US troops in recent years helped suppress remaining Islamic State militants and rein in the Iran-backed militias – mutual foes accused by Iraqi officials of attacking locals. The US troop drawdown is creating a security vacuum, Ibrahim said, making Fallujah more dangerous.

“I’d rather have the Americans here than the alternatives,” the 37-year old said.

Ibrahim’s assessment is shared by many security officials, former fighters and residents in north and west regions of the country that comprise up to a third of Iraqi territory, former insurgent strongholds once loyal to Sunni dictator Saddam Hussein.

Last month, the United States completed a reduction of its forces in Iraq to 2,500 troops. That’s about half the level of less than a year ago.

Recent months have witnessed more than 25 deadly attacks that Iraqi officials attribute to Islamic State militants. Last month, the group staged its biggest attack in years with a suicide bombing in the capital Baghdad that killed more than 30 people.

The US-led military coalition of 80 nations battling Islamic State in Iraq said it carried out 10 strikes against militant targets in Iraq in December alone.

A coalition official said there were no plans to reverse the drawdown and said Iraqi forces were capable of handling the ongoing Islamic State insurgency with current levels of coalition support.

Washington’s contingent is the largest in the coalition force, which includes 900 troops from other countries. Still, the US presence in Iraq is tiny compared to the 170,000 troops it stationed in the country after its invasion.

Parts of Iraq’s 300,000-strong military operate across the country’s western and northern areas. The paramilitaries number at least 100,000, with a significant portion in the north and west. Security officials and analysts estimate there are thousands of Islamic State fighters.

One US official acknowledged the withdrawal over the past year has reduced American military capabilities in Iraq but stressed that US assistance has continued. “We’re still working hard to enable and support our Iraqi partners,” said the official, adding the Iraqis were already operating more independently.

The official conceded Islamic State remains a determined enemy. “So it’s not a bloodless future,” the official said.

The administration of President Joe Biden has given no indication it intends to significantly reverse the drawdown started under predecessor Donald Trump. The Pentagon said the Biden administration is conducting a review of numbers and position of troops, including in Iraq.

An Iraqi government spokesman said the drawdown hasn’t affected its ability to contain Islamic State. “There is ongoing coordination” with the US forces that remain, he said.

Most Iraqis oppose foreign influence. Some welcome the US withdrawal. But many, especially in Sunni regions, say they would choose a small American military presence over increased power for the pro-Iran militias.

Paramilitaries aligned with Iran say the Islamic State insurgency against the Iraqi military requires them to stay in the Sunni-majority regions to fight the militants. They vow to drive foreign forces out of Iraq if Biden does not commit to a full withdrawal. The Iran-aligned paramilitaries deny involvement in any attacks or human-rights abuses.

Islamic State fighters controlled nearly a third of Iraq between 2014 and 2017. They now occupy remote desert areas and mountain ranges. They regularly claim attacks that kill soldiers and Shi’ite militiamen in Iraq.

Fallujah and other major cities in Sunni regions once held by Islamic State have begun to revive. Newly paved main roads run past busy shops and restaurants. But outside urban centres, buildings flattened in battle remain in ruins. Thousands of displaced families have not yet returned.

Accompanied by his young son, Ibrahim spoke at a crowded Fallujah intersection that in October saw the city’s first motorcycle bomb in two years. Iraqi officials blamed Islamic State. There has been no claim or denial of responsibility from the group.

“In recent months, we’ve seen more Daesh attacks across all these areas,” said Salah al-Essawi, a Sunni paramilitary commander in the area, using an alternative term for Islamic State. The attacks include an assault that killed two security personnel after the Fallujah bombing in October. Essawi and other Iraqi security officials attribute the killings to Islamic State, which hasn’t commented.

Some Iraqi military officials say the rise in violence is due in large part to the reduced American presence.

An Iraqi army officer who works with the US-led coalition cited an example of the Iraqi military’s reliance on America: a recent airstrike that killed a top Islamic State leader. It was a joint US-Iraqi effort, he said.

“Our troops were pursuing him, but would have struggled to find where he was hiding if not for the US air support,” the officer said. He said the coalition carries out fewer air strikes against Islamic State targets than it used to.

“Many threats still exist and the duty of the factions is to deal with Daesh or any other foreign threat,” Nasr al-Shammari, a senior official in the Harakat al-Nujaba paramilitary, told Reuters weeks before Biden’s inauguration.

Shammari wants the United States out, saying the presence of its troops fuels instability. Iraqis who want US forces to stay are a politically-motivated minority, he said.

Many residents of Fallujah and nearby towns fear being caught up in reprisals for the increasing Islamic State attacks – both from Iraqi security forces and even more so from Shi’ite paramilitaries.

Ibrahim said he has been detained by both over the years on suspicion of links with al Qaeda and Islamic State, which he denies.

Essawi, the Sunni paramilitary leader, said the Shi’ite militias have been emboldened by talk of the US drawdown. The Iran-aligned forces, Essawi said, have put their flags back up at some checkpoints they had planned to abandon.

“We hope Biden won’t leave us in their hands,” he said.

These were the details of the news In Saddam strongholds that fought America, Iraqis fear a US departure for this day. We hope that we have succeeded by giving you the full details and information. To follow all our news, you can subscribe to the alerts system or to one of our different systems to provide you with all that is new.