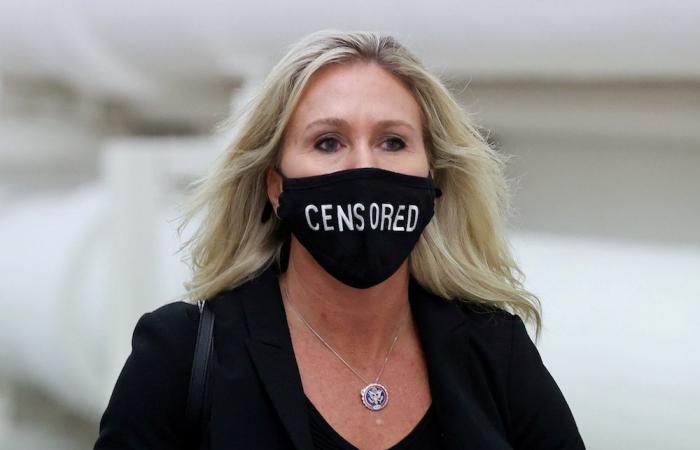 WASHINGTON, Feb 5 — Republican congresswoman Marjorie Taylor Greene expressed regret yesterday for some of her incendiary remarks but failed to apologise for supporting violence against Democrats, as she faced punishment in the US House of Representatives.

The House is due to vote later in the day on a Democratic-backed resolution that would punish Greene, a first-term lawmaker from Georgia and ally of former President Donald Trump, a day after the chamber’s Republican leader Kevin McCarthy opted not to reprimand her.

Greene delivered a speech on the House floor ahead of the vote on whether to oust her from two high-profile congressional committees, disavowing some of her previous statements.

“I was allowed to believe things that weren’t true, and I would ask questions about them and talk about them. And that is absolutely what I regret,” Greene added.

Before taking office last month, Greene voiced support for an array of unfounded conspiracy theories including the “QAnon” one that holds that elite Democrats are part of a cabal of Satan-worshipping pedophiles and cannibals. According to CNN, Greene expressed support online for executing prominent Democrats including House Speaker Nancy Pelosi.

Greene, who said she was inspired to enter politics by Trump’s leadership, embraced his false claim that he won the November 3 election, alleged that deadly US school shootings were staged, suggested a space laser was used to deliberately start a California wildfire and questioned whether a plane struck the Pentagon in the 2001 attacks on the United States.

She has been assigned to serve on the House Budget Committee and the House Education and Labor Committee.

Republicans opposed yesterday’s vote, saying it could set a dangerous precedent for punishing lawmakers over comments made before taking office.

Democrats said the action was necessary because of failed Republican leadership.

“The party of Lincoln is becoming the party of violent conspiracy theories, and apparently the leaders of the Republican Party in the House today are not going to do a damn thing about it,” Democratic Representative Jim McGovern said.

In her speech, Greene disavowed belief in the QAnon conspiracy theory, acknowledged that school shootings really happened and that the September 11 attacks did occur.

But Greene also said the House was preparing to “crucify me in the public square for words that I said and I regret a few years ago” after tolerating other lawmakers she accused of condoning violent urban riots and attacks on police last year. Greene painted the current controversy in religious terms, citing her Christian beliefs and saying “I am a sinner.”

Green also assailed the media, asking, “Will we allow the media that is just as guilty as QAnon of presenting truth and lies to divide us?”

The House Republican caucus on Wednesday allowed Greene to go unpunished but also turned back a bid by lawmakers on the right to oust establishment Republican Liz Cheney from the party’s House leadership over her January 13 vote to impeach Trump on a charge of inciting insurrection before a mob of his supporters attacked the Capitol on January 6.

The political atmosphere in Congress has been acrimonious since that rampage in which some Trump supporters threatened to kill Democratic lawmakers including Pelosi, as well as Republican former Vice President Mike Pence.

Democratic Representative Jimmy Gomez said he expects to bring a measure to the House floor calling for Greene’s expulsion from Congress.

“She never really apologised and I still think she should be removed from the House of Representatives,” Gomez told reporters.

In 2019, Republican congressman Steve King was stripped of his House committee assignments after he questioned during a media interview why white supremacy is considered offensive. He is no longer in Congress. — Reuters

These were the details of the news US Republican Marjorie Taylor Greene voices regret over remarks as punishment looms for this day. We hope that we have succeeded by giving you the full details and information. To follow all our news, you can subscribe to the alerts system or to one of our different systems to provide you with all that is new.