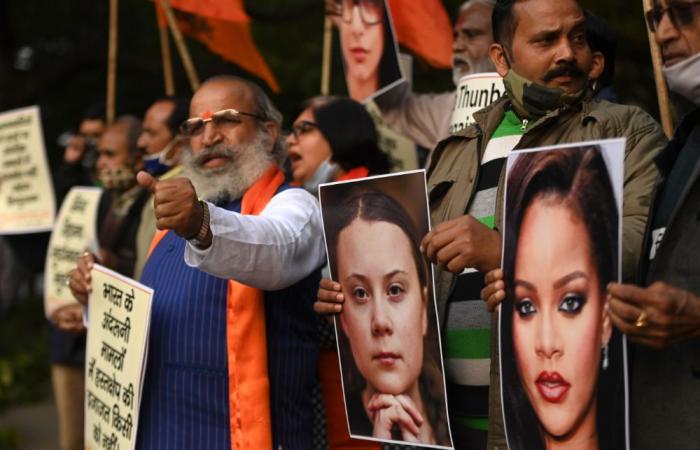 US pop superstar Rihanna generated conversation with her Twitter post on Tuesday, which asked her more than 100 million followers: “Why aren’t we talking about this?!” Above a news article on the demonstrations.

The tweet received more than 750,000 likes and 316,000 retweets, including from other celebrities such as Swedish climate activist Greta Thunberg and Neena Harris, the niece of US Vice President Kamala Harris.

The flurry of social media attention has frustrated New Delhi, with the Indian Foreign Ministry breaking with protocol to issue a statement on Wednesday rejecting the claims and launching new hashtags #IndiaTogether and #IndiaAgainstPropaganda.

“The temptation of sensationalist social media hashtags and comments, especially when resorted to by celebrities and others, is neither accurate nor responsible,” said the Ministry of External Affairs (MEA).

“Before rushing to comment on such matters, we would urge that the facts be ascertained, and a proper understanding of the issues at hand be undertaken,” it added.

Following the MEA’s statement, some renowned Bollywood stars and cricketers with proximity to the ruling Bharatiya Janata Party retweeted the ministry’s statement and promoted the government’s hashtags on social media.

Legendary cricket icon, Sachin Tendulkar, called for unity in his tweet: “India’s sovereignty cannot be compromised. External forces can be spectators but not participants. Indians know India and should decide for India. Let’s remain united as a nation.”

Actor Akshay Kumar tweeted: “Farmers constitute an extremely important part of our country. And the efforts being undertaken to resolve their issues are evident. Let’s support an amicable resolution, rather than paying attention to anyone creating differences.”

Protesting farmers, however, hit back at the government’s counter-campaign on social media.

Asutosh Mishra of the All India Farmers Struggle Coordination Committee told Arab News: “What the government is indulging in is to divert the attention of the people from the pressing issues of farmers and to display a false sense of pride.”

He added: “The government is trolling international celebrities by coining hashtags and encouraging Indian actors to retweet their lines. The government should talk to farmers.”

For over two months, thousands of farmers and their families from across the country have held sit-in protests at different Delhi borders demanding the repeal of three farm acts passed in September.

They say the laws would leave them at the mercy of corporate giants and prevent the government from buying crops at guaranteed prices.

Farmers sell their products at wholesale markets owned by the government, which also sets the minimum support price (MSP) for grains, which is generally higher than the market price.

They fear that the new laws attack the core of traditional markets and the MSP by allowing the unregulated entry of private players into the farm sector, which employs more than 50 percent of India’s population.

However, the government claims that the new laws will bring greater prosperity to farmers and allow broader market access for their produce.

The government held 10 rounds of talks with farmers to resolve the issue, suspending the new laws for 15 months to reach an agreement. However, farmers rejected the proposal and demanded an abrogation of the laws.

On Jan. 26, farmers participated in a “tractor rally” which turned violent, claiming the life of one farmer and injuring several others, including some policemen.

Farmers blame the government for “creating chaos in the rally to discredit the movement.”

The government cracked down on the protesters at the three demonstrations in Delhi by fortifying the areas, limiting the water supply and suspending the internet.

“Farmers are living in very inhuman conditions every day the government is trying to discredit the movement. It’s like Prime Minister Narendra Modi’s regime is preparing for a war against farmers,” Mishra said.

Sunil Pradhan of the Indian Farmers’ Union said he appreciated the support from international celebrities.

“People all across the world sympathize with the farmers, but our government does not have any empathy for us,” Pradhan told Arab News, adding: “The norm across the world is when injustice is done, people stand by the sufferer.”

He said the government is “propagating false narrative and attaching their mistakes with national pride.”

“It is sad that someone as erudite and worldly-wise like Foreign Minister Subrahmanyam Jaishankar should allow such puerile reactions by the MEA,” P. Chidambaram, a senior leader of the opposition Congress Party and former finance minister, tweeted on Wednesday, adding that “issues of human rights and livelihoods do not recognize national boundaries.”

Political analysts said the government’s reactions were “unfortunate and a sign of immaturity.”

Satish Mishra, a senior fellow at the Delhi-based think tank the Observer Research Foundation, told Arab News: “A government which has been enjoying independent existence for more than seven decades to react on a tweet of a popular singer and deploy the entire propaganda machinery of the government is very unfortunate and a sign of immaturity.”

Mishra added: “The government is building fortresses to encircle farmers and fixing nails on the road to stop the movement. By indulging in propaganda, the government is diverting the popular attention.”

Prof. Ronki Ram of Panjab University told Arab News that “the world is a global village and people have easy access to information.”

Ram added: “When the government starts thinking itself as a nation, then there is a problem. The government and the nation are two different things. The nation represents the country’s people, and the government is a system that people have brought in.”

These were the details of the news Indian government hits back at celebrity social media posts supporting farmers’ protests for this day. We hope that we have succeeded by giving you the full details and information. To follow all our news, you can subscribe to the alerts system or to one of our different systems to provide you with all that is new.