Draghi calls for ‘unity’ as tries to form Italian govt 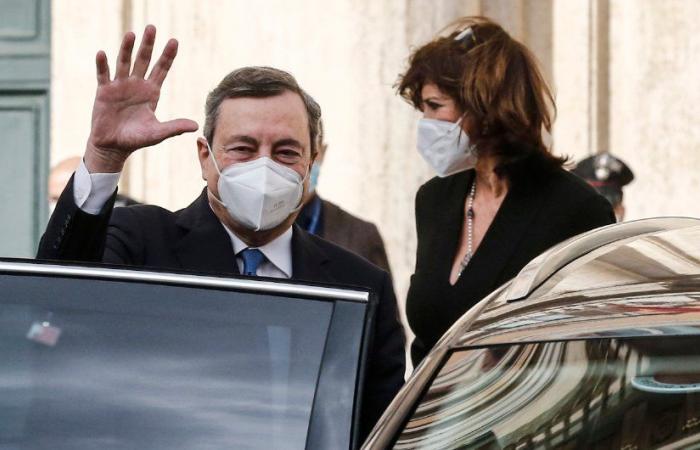 Jeddah - Yasmine El Tohamy - ROME: Former European Central Bank chief Mario Draghi urged Italy’s splintered parties Wednesday to get behind him as he tries to form a new government and lift his country out of the devastation of the coronavirus pandemic.
After receiving a mandate from President Sergio Mattarella to open talks on a national unity government, Draghi stressed the urgency of resolving the political chaos at such a “difficult moment.”
There has been no fully functioning government in Rome for weeks, as Giuseppe Conte’s ruling coalition slowly collapsed in a row over the handling of Covid-19 and the resulting deep recession.
Conte quit last week but stays on in a caretaker capacity while Draghi — famous for promising to do “whatever it takes” during the eurozone debt crisis — tries to build his own majority in parliament.
“I am confident that... unity will emerge and with it the ability to give a responsible and positive answer to the appeal of the president,” Draghi said after talks at Mattarella’s lavish palace in Rome.
The economist highlighted the huge challenges facing Italy, which was the first European country to face the full force of the pandemic and is still suffering badly.
More than 89,000 people with coronavirus have died, while business closures, restrictions and the collapse of tourism have brought on the worst recession since the end of World War II.
The government expects more than 200 billion euros ($240 billion) in European Union recovery funds to help get back on its feet — but only has until April to submit a credible spending plan to Brussels.
“It will not be a comfortable journey, but Draghi’s skills and experience may well do the trick,” said Lorenzo Codogno, an economist and former top official at the Italian economy ministry.
Draghi, dubbed “Super Mario” for his action calming the markets during his stint at the ECB during 2011 to 2019, had long been discussed as a potential savior for Italy.
The Milan stock exchange jumped three percent in midday trading on Wednesday in anticipation of his appointment, while there was praise from Brussels.
“It will not be a big surprise if I tell you that Mario Draghi is respected and admired in this city and beyond,” said Margaritis Schinas, a vice president of the European Commission.
However, several analysts pointed out that the 73-year-old Draghi faced an uphill struggle in trying to cobble together what would be Italy’s 67th government in 75 years of republican history.
“At present, it is far from clear if a majority in parliament would be willing to support Draghi as prime minister,” commented Wolfango Piccoli, co-president of the Teneo consultancy.
Italy’s would-be premier can count on the center-left Democratic Party (PD) and former premier Silvio Berlusconi’s conservative Forza Italia, as well as smaller centrist forces.
To build a workable majority, Draghi needs to win over the populist Five Star Movement (M5S) or the far-right League party of Matteo Salvini, but their support seemed far less than assured.
The M5S “will not vote for the creation of a technocratic government led by Mario Draghi,” the party’s acting leader Vito Crimi wrote on Facebook.
It remained unclear whether the M5S’ opposition could be softened with offers of cabinet posts, while Italian news reports suggested the party was deeply split on the way ahead.
Salvini, on the other hand, told the Corriere della Sera newspaper that he would be ready to back only a short-lived government leading the country to snap elections “in May or June.”
Mattarella clearly said he wants to avoid early polls, given the complication of holding them in the middle of a pandemic.
If Draghi succeeds in building a coalition, he would be expected to pick a cabinet before formally taking office and facing a confidence vote in parliament.
Italy’s outgoing government took office in September 2019 but was fatally weakened last month when former premier Matteo Renzi withdrew his Italia Viva party.
Conte hoped to return with a new government comprising the M5S and the PD, but they could not agree by the president’s deadline of Tuesday.

These were the details of the news Draghi calls for ‘unity’ as tries to form Italian govt for this day. We hope that we have succeeded by giving you the full details and information. To follow all our news, you can subscribe to the alerts system or to one of our different systems to provide you with all that is new.