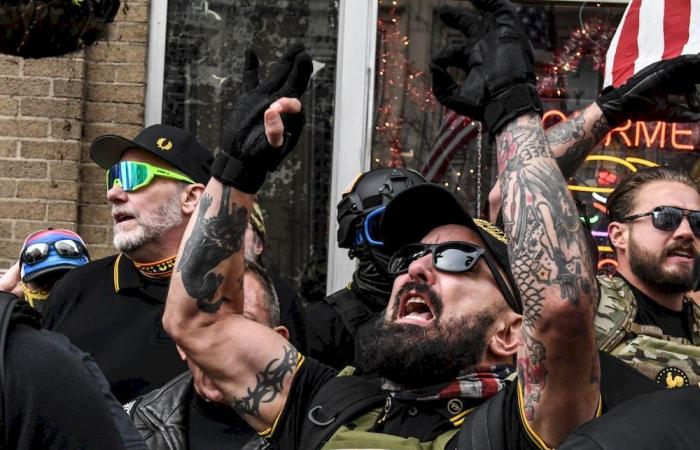 Hello and welcome to the details of Canada puts Proud Boys on terror list, cites active security threat and now with the details

“There has been a serious and concerning escalation of violence ― not just rhetoric but activity and planning ― and that is why we have responded as we have today,” he told a news conference. He did not give details.

The group's assets can now be frozen by banks and financial institutions, and it is a crime for Canadians to knowingly deal with assets of a listed entity. Anyone belonging to the group can be blocked from entering Canada.

The group's founder, Gavin McInnes, is Canadian who lives in the United States.

US authorities have charged several members of the Proud Boys in connection with the Jan 6. attack in Washington.

Ottawa added 12 other groups to its list of terrorist entities ― three neo-Nazi groups, eight organisations described as affiliates to al Qaeda and Daesh (Islamic State), as well as Hizbul Mujahideen, a Kashmiri group.

Blair said Canadian intelligence agencies had been working for months and in some cases years to gather evidence needed to list the groups.

Founded in 2016, the Proud Boys began as an organisation protesting political correctness and perceived constraints on masculinity in the United States and Canada, and grew into a group that embraced street fighting.

Former US President Donald Trump, asked last September whether he would denounce white supremacists and militia groups, called on the Proud Boys to “stand back and stand by”.

The listing will likely have “a bit of a polarizing response” on Proud Boys members, said Jessica Davis, a former senior intelligence analyst with the Canadian Security Intelligence Service spy agency.

“For some individuals this may have a dampening effect ... However, there are probably some hard-core members who will be further radicalised by this,” said Davis, president of Insight Threat Intelligence.

It is tough to say how many Proud Boys members there are in Canada, said Evan Balgord, executive director of the Anti-Hate Network of Canada.

“Before the announcement there were about eight chapters,” he said by phone. “I would expect they're pretty much done for here ... under that name, they're done.”

The group itself does not hold major financial assets, as far as Balgord knows.

The move underscored constitutional concerns about a Canadian government's ability to designate a group as a terrorist entity, said Leah West, a national security professor at Ottawa's Carleton University and former lawyer with the Canadian justice department.

Designations are impossible to challenge beforehand and difficult to address afterward, especially given lawyers may be reluctant to provide counsel to members of a terrorist group, she said by phone. ― Reuters

These were the details of the news Canada puts Proud Boys on terror list, cites active security threat for this day. We hope that we have succeeded by giving you the full details and information. To follow all our news, you can subscribe to the alerts system or to one of our different systems to provide you with all that is new.