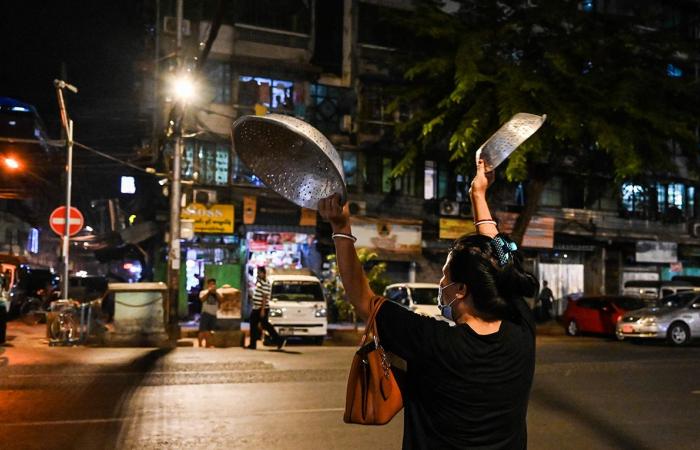 Thank you for reading the news about Pot shots: Myanmar’s nonviolent message to army ‘bullies’ and now with the details

Jeddah - Yasmine El Tohamy - YANGON: All they were waiting for was one signal to take to the streets and demonstrate, as Myanmar residents are accustomed to when protesting against the military.

However, soon after the army’s coup on Monday, when armed forces chief Min Aung Hlaing declared a state of emergency and announced military rule over the country for a year, most Myanmarese instead opted for a nonviolent and traditional method of expressing resistance — by banging on pots and pans.

The streets of Yangon, the country’s biggest city with a population of more than 5 million, echoed with the sound from 8 p.m. on Monday when thousands of people gathered on their balconies to make themselves heard.

“It is our traditional way of getting rid of evil spirits. If we assume an evil spirit possesses someone or something, we bang pots, pans and plates so that the evil spirit runs away from fear,” Hla Min, a 52-year-old resident of Yangon’s Hlaing township, told Arab News.

He should know. As a witness to the military’s brutal crackdown against protesters during pro-democracy movements in 1988 and 2007, Min said that he was “relieved” people were choosing to demonstrate in a nonviolent manner.

“I was worried that there would be a large gathering of people on the streets to face soldiers who are ready to shoot them down. We know the soldiers have no mercy,” he said, shortly after joining the “balcony protest” for 15 minutes.

However, Min Ko Naing, a leading pro-democracy advocate and former political prisoner who is considered the second most influential person in the country after Suu Kyi, managed to escape arrest and went into hiding after calling on people to resist the military in a nonviolent manner.

“People should show zero recognition of the regime, and refuse to participate by not obeying them,” he said in a short video that went viral on social media on Tuesday.

“This is what we should do to boycott the regime,” he said.

A new military regime, the National Administrative Council, was also formed on Tuesday and will be chaired by Hlaing.

Signs of public anger began to surface, particularly among health workers, who despite bearing the brunt of the COVID-19 pandemic, are leading a civil disobedience campaign against the new regime.

Doctors and nurses in at least 74 public hospitals and health departments across the country went on a strike on Wednesday in protest at the coup.

In a joint statement issued on Wednesday, several said that they do not recognize the military government’s legitimacy.

“We will stop going to hospitals that are now under the illegitimate military government,” it said.

A doctor at a public hospital in Yangon’s Insein township said that the movement could make the patients “uncomfortable,” but the boycott was “inevitable.”

“We care about the patients, but we can’t accept bullying by the military. We can’t be part of the dictatorship,” he told Arab News on Wednesday.

“I hope patients will understand us,” he said.

“We started with a noisy protest, and are planning more nonviolent resistance till we achieve our goal,” he told Arab News.

Latt, who was imprisoned for five years for leading a pro-democracy movement in 2007, said a campaign to call people on to the streets will be a “last option” against the regime.

“We know we could be arrested, detained, tortured and locked in prison for expressing our objection to them,” he said.

“They are trying to steal the future of the country. We can’t let that happen.”

These were the details of the news Pot shots: Myanmar’s nonviolent message to army ‘bullies’ for this day. We hope that we have succeeded by giving you the full details and information. To follow all our news, you can subscribe to the alerts system or to one of our different systems to provide you with all that is new.