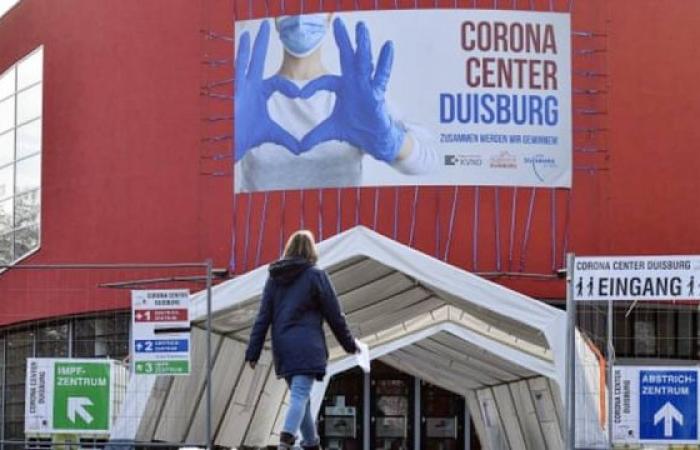 We show you our most important and recent visitors news details Global coronavirus caseload reaches 104.5m in the following article

Coronavirus is continuing its spread across the world with over 100 million confirmed cases in 218 countries and more than 2.26 million deaths. The virus is surging in many regions and countries that had apparent success in suppressing initial outbreaks are also seeing infections rise again.

The US has recorded about 26 million cases and more than 446,000 deaths, the highest figures in the world. Daily cases were at record levels in early January but they are now falling. More than 100,000 coronavirus patients are in hospital, but those numbers are dropping too.

The US recorded Tuesday 110,679 new coronavirus cases in the past 24 hours as the confirmed cases nation-wide crossed 26 million. It also recorded 3,389 virus-related deaths according to Johns Hopkins University.

The tally showed that the confirmed cases nationwide reached 26,431,799 and at least 446,744vdeaths across US, with the country remaining the world’s worst hit by the pandemic.

Furthermore there were a record 92,880 people currently hospitalized for coronavirus in the US, according to COVID Tracking Project. The US ranks first globally in the number of coronavirus cases and deaths.

This comes as January was the “deadliest month of the pandemic in the US, with more than 95,000 COVID-19 fatalities reported,” CNN reported.

India and Brazil have the second and third highest case tallies, recording some 10.7 and 9.2 million cases respectively. Infections have been reported in more than 218 countries and territories since the first cases were identified in China in December 2019.

In Moscow, Russia reported 16,474 new coronavirus cases on Wednesday, bringing the total number of confirmed infections to 3,901,204 after it crossed the 3.9 million mark. Russia's coronavirus crisis center said 526 coronavirus patients had died in the last 24 hours and the overall national coronavirus death toll was at 74,684.

They added 24,822 people recovered from the virus, raising the total number of recoveries to 3,365,367. The COVID-19 pandemic was confirmed to have spread to Russia on Jan. 31, 2020 when two Chinese citizens in Tyumen (Siberia) and Chita (Russia Far east) tested positive for the virus.

In Berlin, German health authorities reported on Wednesday 975 deaths and 9,705 new coronavirus cases in the past 24 hours. The Robert Koch Institute (RKI) for infectious diseases said the country’s death toll increased to 58,956 cases and the total confirmed cases those to 2,237,790.

In Brussels, total infections of coronavirus cases in Belgium on Wednesday increased to 713,271 with 1,854 new infections reported by Belgian health authorities. They reported 49 more deaths from COVID-19 in the last 24 hours raising the total death toll to 21,173.

In Prague, the Czech Republic reported 9,057 new cases of coronavirus on Wednesday, taking the total number of infections in the country since last March to more than one million. The country of 10.7 million has reported 16,683 deaths in connection with COVID-19.

The National Health Commission said total registered infections rose to 89,619 and fatalities remained at 4,636. It added 91 people have recovered from the virus and left hospitals in the past 24 hours to reach a total of 83,467. There are still 1,516 patients receiving treatment.

In New Delhi, India said on Wednesday that 110 people died due to COVID-19 while 11,039 new cases of the coronavirus were registered in the past 24 hours. The Ministry of Health and Family Welfare said that fatalities due to COVID-19 rose to 154,596 as the total number of positive cases mounted to 10,777,284.

According to the ministry, 10,462,631 people recuperated from the pandemic as it spread to 35 states. India has the world's second-highest caseload, but daily infections have dipped steadily since hitting a peak in September.

In Tokyo, Japan reported on Wednesday 2,657 daily cases of novel coronavirus, raising the nation’s total number 395,482, the Health Ministry and local authorities said. The country’s cumulative death rose by 118 and stood at 5,978.

Tokyo added 676 new infections, staying below 1,000 for the sixth straight day, which brought the total cases in the Japanese capital to 101,466. In an effort to curb the spread of coronavirus variants, Prime Minister Yoshihide Suga declared a state of emergency for Tokyo and three surrounding prefectures. It had suspended new entries of non-resident foreign nationals from around the world to Japan through Jan. 31.

In Seoul, South Korea reported 467 new coronavirus cases Wednesday, Yonhap reported in the past 24 hours, bringing the total caseload at 79,311, according to the Korea Disease Control and Prevention Agency (KDCA).

Six people died in the past 24 hours raising the death toll to 1,441. Of the newly identified local infections, 184 cases were reported in Seoul and 107 cases in Gyeonggi Province that surrounds the capital.

In Mexico City, Mexico’s Health Ministry on Tuesday reported 4,384 new confirmed coronavirus cases and 433 additional fatalities, bringing the total to 1,874,092 cases and 159,533 deaths. The government says the real number of infected people is likely significantly higher than the confirmed cases.

In Tunis, Tunisia’s Ministry of Health on Tuesday announced 91 deaths from the novel coronavirus and 1,367 more infections in 24 hours. The tally of confirmed deaths and infections rose to 6,893 and 211,412 respectively since the outbreak of the virus. Meanwhile, overall recoveries went up to 165,067.

Meanwhile, Mauritania’s Ministry of Health said Tuesday that 27 persons tested positive for the novel coronavirus, bringing the country’s caseload to 16,689 while one more person died pushing the fatalities reached 423. The report said, 61 patients have been discharged from hospitals, raising the overall recoveries to 15,799 cases. — Agencies

These were the details of the news Global coronavirus caseload reaches 104.5m for this day. We hope that we have succeeded by giving you the full details and information. To follow all our news, you can subscribe to the alerts system or to one of our different systems to provide you with all that is new.