Tarnished by its Gaza rule, Hamas may struggle in elections 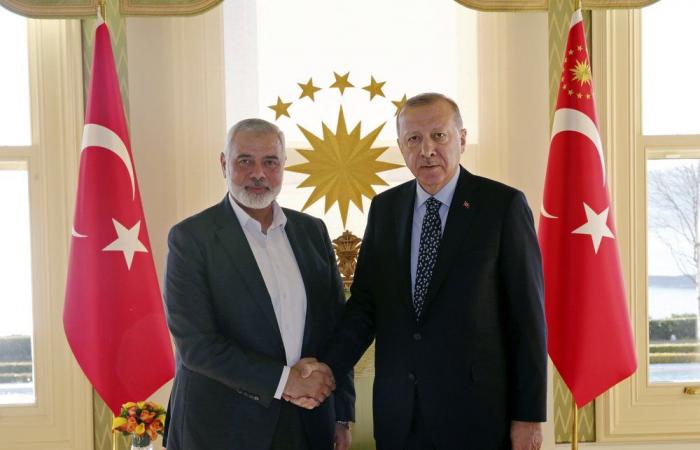 You are now following the details of the Tarnished by its Gaza rule, Hamas may struggle in elections news and now we leave you with the details

But he has since left the impoverished Gaza Strip and, along with some other Hamas leaders, is living in luxury as he splits his time between Turkey and Qatar. With new elections planned this spring, Hamas will struggle to campaign as a scrappy underdog that is above trading its principles for material comforts.

It remains to be seen whether the elections decreed by President Mahmoud Abbas will actually be held. Much depends on whether his secular Fatah party and Hamas can reach some kind of agreement overcoming the bitter divisions that have prevented previous attempts to hold a vote.

But it’s clear that Hamas’ image among many Palestinians, even onetime supporters, has suffered since 2007, when the group seized Gaza from Abbas’ forces in a week of bloody street battles.

Since then, Hamas has established its own quasi-state with its own civil service and security forces. But it has struggled to provide even basic services with Gaza’s economy devastated by three wars with Israel and a crippling Israeli-Egyptian blockade that has confined the territory’s 2 million people to what Palestinians often refer to as the world’s largest open-air prison.

That some of its leaders have left Gaza has not helped. Hamas leaders who ascended the ranks when it was an underground militant group have traded their street clothes and motorbikes for business suits and shiny SUVs. Some, like Haniyeh, have decamped to luxury hotels in Turkey and Qatar, leaving lower-ranking officials and ordinary Palestinians to deal with the consequences of their policies.

“Every year, the situation is getting from bad to worse,” said Youssef Ahmed, who works in a food stall in an east Gaza City market. “People don’t have money to buy the basic things.”

Still, while Gazans grumble privately, they rarely speak out against Hamas, which has a history of locking up critics.

Ahmed said he blames “everyone” — Hamas, Israel and Abbas’ Palestinian Authority. But he said, as the ruling power, Hamas has a special responsibility.

Haniyeh, who became Palestinian prime minister after the 2006 election and is now the overall leader of Hamas, left Gaza in 2019 for what Hamas said was a temporary foreign tour. He has yet to return.

A recent video that surfaced on social media showed Haniyeh playing soccer on a well-groomed field beneath the glass skyscrapers of gas-rich Qatar — worlds away from the Beach Refugee Camp in Gaza City, where he was born and still maintains a family home. Another video from Monday showed him in a tailored suit surrounded by bodyguards and being welcomed by Qatari dignitaries at a red-carpet event.

That’s largely because of the blockade, which Israel says is necessary to keep Hamas from importing arms. Israel and most Western countries consider Hamas a terrorist group because it has carried out scores of attacks over the years, including suicide bombings, that killed hundreds of Israeli civilians. A long-running dispute between Hamas and Abbas’ Palestinian Authority over the provision of aid and services to Gaza has made matters worse.

Hamas blames Gaza’s suffering on the PA, Israel and the international community.

“There is a popular awareness that it’s not Hamas’ fault, and that external sides want to undermine the democratic experience,” said Hamas spokesman Hazem Qassem. He said Hamas still has “massive” popular support and would win a majority in any future election.

He added that Hamas members in Gaza had also suffered from the wars, isolation and economic collapse.

Still, the suffering is not shared equally.

Qatar has sent hundreds of millions of dollars in aid to Gaza in recent years to shore up an informal cease-fire. That money has allowed the Hamas-run government to pay its civil servants — while imposing taxes on imports, exports, businesses and tobacco that many ordinary Palestinians have resented as compounding their suffering. Hamas security forces have violently cracked down on protests against those measures.

In another example of the inequality in Gaza, a “fast track” through the Rafah crossing with Egypt — the only way most Gazans can travel into and out of the territory — is available for those who can pay high fees or have connections to Egyptian officials. In recent months, three of Haniyeh’s sons have appeared on the list, which is made public by the Hamas-run Interior Ministry. Other travelers must go through a lengthy permit process.

Ahmed Yousef, a former adviser to Haniyeh who himself has relocated to Istanbul, acknowledges the group has fallen short of its professed ideals.

“We presented ourselves as a popular movement, not an elite or factional one, so this should have obliged us to better address the people’s needs and problems,” he said.

Akram Atallah, a longtime columnist for the West Bank-based Al-Ayyam newspaper who moved from Gaza to London in 2019, said Hamas has tried to use the “duality” of being a government and a militant group to its advantage. When faulted for not providing basic services, it claims to be a resistance group; when criticized for imposing taxes, it says it’s a legitimate government, he said.

Hamas may still do well in any elections, if only because its main competitor, Fatah, has an even longer record of failure. Fatah’s upper ranks are widely seen as being filled with corrupt individuals who are more interested in enjoying the perks of VIP status with Israel than in advancing the struggle for statehood.

A December poll carried out by the Palestinian Center for Policy and Survey Research found support for the parties was close — 38% for Hamas, compared to 34% for Fatah — but predicted that Haniyeh would handily defeat Abbas in a presidential race. The group surveyed 1,270 Palestinians across the West Bank and Gaza, with a margin of error of 3 percentage points.

Assuming elections are held, “it looks like (Fatah and Hamas) will dominate the next parliament, but neither one will have a majority,” said Khalil Shikaki, the head of the center. He said independent candidates and smaller factions will win the remaining seats.

Atallah, the journalist, says Hamas is still able to appeal to “the people’s emotions,” but that the hold it once had on many has faded.

“Hamas as an authority has been exposed,” he said. “The people found out that its leaders live much better than they do.”

These were the details of the news Tarnished by its Gaza rule, Hamas may struggle in elections for this day. We hope that we have succeeded by giving you the full details and information. To follow all our news, you can subscribe to the alerts system or to one of our different systems to provide you with all that is new.