In a Baghdad bar, a Syrian serves cocktails to fix war woes 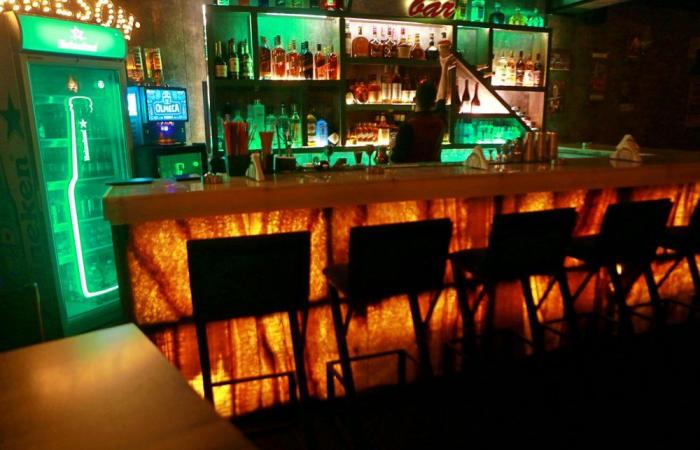 You are now following the details of the In a Baghdad bar, a Syrian serves cocktails to fix war woes news and now we leave you with the details

Mohamed Nass - Cairo - BAGHDAD (AP) — From the outside, the building seems just one of the many in central Baghdad that are decaying from years of misuse — silent, windows shut.

After 6 pm, one knock on its steel-plated doors and a portal is opened to a different world rarely found in Iraq’s capital.

Bodyguards check bags for weapons. Names are checked against a list. Faint sounds of club beats resound, growing louder every level up a cascading staircase. At the top floor, a bartender works skillfully behind an illuminated counter. Above him, shelves of liquor glow like jewels under a neon sign with the name of the bar.

Ask for a menu, and he responds, coolly: “I am the menu,” and produces a cocktail with the confidence of a magician.

The bar’s manager Alaa, a Syrian national scarcely in Iraq one year, has a vision for the place: A clandestine establishment that can serve as a refuge for his hand-picked clientele wishing to evade the stigma of drinking alcohol in a conservative Muslim-majority society. But being a barman is a dangerous trade in Iraq, where alcohol shops are frequently targeted by disapproving militias.

“This place is not for everyone,” he said. “We are living in fear, especially in this place… but I have to tolerate it. It’s my job. The workers here, I have to protect them. My clients too.”

Posters from the British crime series Peaky Blinders are framed on the walls. The show, which follows the exploits of a gang in Birmingham, was Alaa’s main inspiration for the bar’s decor. “It’s a lot like this place (Baghdad), unfortunately,” he said.

Open for only a few weeks, Alaa could not have picked a worse time to inaugurate a bar. Bombings of shops selling alcohol are on the rise in the Iraqi capital. Alaa’s supplier was among those hit. On Tuesday alone, two roadside bombs exploded near two different shops, causing material damage. It was the fourth such attack in the span of a week.

Baghdad’s bar scene is muted and limited to a handful of restaurants that also serve alcohol. Even these have uncertain futures and are periodically closed down. Their mistake, Alaa said, was to be open to the broader public. Absurdly, the survival of Alaa’s bar depends on keeping clients to a minimum.

The bar’s opening also comes as crude-exporting Iraq grapples with the coronavirus pandemic and a crippling economic crisis brought on by low oil prices last year. In response to the severe liquidity crisis, the Finance Ministry recently devalued the Iraqi dinar, which is pegged to the dollar, by over 20%.

“These things have effects on business, but I am still finding clients. There are a lot of people here who have money. Legal, illegal doesn’t matter. Doesn’t make a difference for me,” Alaa said.

Gripped by fear, he watches the comings and goings on surveillance cameras day and night. He asked that The Associated Press refer to him only by his first name and withhold the name and location of the bar to avoid reprisals from armed groups.

He has other rules, too: Word-of-mouth is the only form of advertising he accepts, every would-be patron must text him directly for a reservation, they must not be too loud indoors. Alaa knows each and every customer by name.

Those who break the rules or “make problems” are put on an ever-growing blacklist.

It’s not the most scared he has ever been.

Being witness to Iraq’s faltering rule of law is just the latest chapter in his life’s odyssey, which began with the war that ravaged his native Syria in 2011. He recalls the bomber planes flying overhead while completing exams in Damascus University. At one point, his village in southern Syria was surrounded by militants from both the Islamic State group and al-Qaida-affiliated Jabhat al-Nusra. Next came Lebanon, where he spent years bracing for one crisis after another.

“I have been through all the crises in the region — Syria, Lebanon, Iraq,” he said. From those he learned just one lesson: “Earn, before you spend.”

At every stage, he sought work doing the one thing he knows best. Nightlife, he said, is in his blood.

His resume reads like a Beirut weekend rager. His mixing talents have graced many bars along Beirut’s famed party streets Gemmayze and Mar Mikhael. In 2017, he was unable to return to Lebanon from a trip to Syria after the authorities refused to renew his residency, a policy impacting many Syrian workers at the time.

He returned to his native Sweida, a predominately Druze village in Syria’s south, where he tried — and failed — to launch a car trading business. A cousin told him money was to be made in Baghdad, where many Syrians have found work in hospitality.

It was late 2019 and Alaa had a choice: Earn a living in Baghdad, where security is precarious, or risk a perilous sea journey to seek asylum in Europe. “I could never accept being a refugee and live a life without dignity and freedom,” he said.

Creating the bar was a stroke of luck.

The Iraqi owner was about to sell the building when Alaa stepped in and offered to revamp the place and split the profits. Bringing in $5,000 a week and almost always at capacity on weekends, the bar is showing early signs of success. News of its opening spread like wildfire on social media, including closed Facebook groups run by Iraq’s lawyers, doctors and engineers — the type of patron Alaa is seeking out.

The success of his business is linked inextricably to the well-being of his family back home.

His mother and sister still live in Sweida, where most residents bring home a mere $30 a month in wages. The bar serves a dual purpose. On the one hand, it meets the growing demands of Iraq’s underground drinking scene.

“The other is to put food on the table back home,” he said.

IMAGE: A waiter reaches for a bottle at a cocktail bar hidden away in a dark corner of central Baghdad, Iraq, Wednesday, January 27, 2021. (AP Photo/Khalid Mohammed)

These were the details of the news In a Baghdad bar, a Syrian serves cocktails to fix war woes for this day. We hope that we have succeeded by giving you the full details and information. To follow all our news, you can subscribe to the alerts system or to one of our different systems to provide you with all that is new.