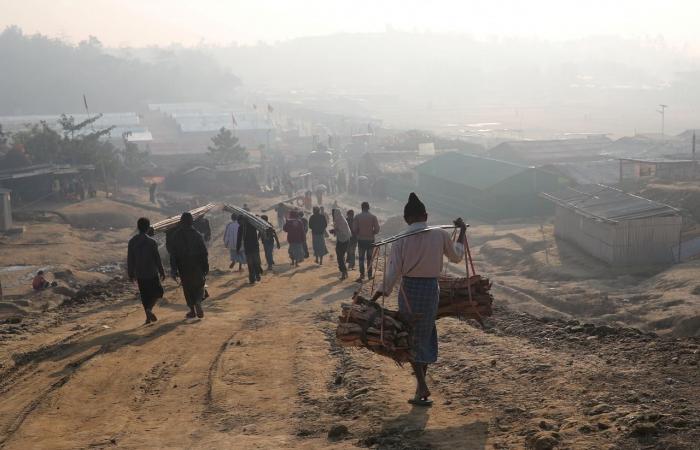 Jeddah - Yasmine El Tohamy - DHAKA: A day after Myanmar’s military overthrow of the government, Rohingya leaders said on Tuesday they fear the move could “further delay” efforts to repatriate the refugees in Bangladesh to their homeland in Rakhine.

The Myanmar military, locally known as Tatmadaw, seized power in the early hours of Monday and detained its the country’s leader, Aung San Suu Kyi, and other associates.

The coup followed a landslide victory of Suu Kyi’s National League for Democracy (NLD) in the general elections in November last year.

The army rejected the results, citing poll irregularities and fraud. During the takeover on Monday, army chief Gen. Min Aung Hlaing declared a state of emergency for a year in the country.

Khin Maung, head of the Rohingya Youth association, an organization based in the Cox’s Bazar refugee camps, said he feared that the coup would have a “huge impact” on the peaceful repatriation process as the military lacked the “political will to take us back.”

“They killed us, burnt down our villages. It means they intend to destroy us. They are busy taking power and strengthening their positions in state mechanisms,” Maung told Arab News.

He added that the military refuse to negotiate with the Bangladeshi government to repatriate the Rohingya, causing further delay.

“Of course, repatriation negotiations will be delayed. Both the civilian and military government have the same policy on Rohingya, and in this situation, the existing Rohingya in Rakhine state will have a worse future,” Maung added.

Bangladesh is hosting more than 1.1 million Rohingya who fled from persecution at the Myanmar military’s hands in the Buddhist-majority country.

The Rohingya endured decades of abuse in Myanmar, beginning in the 1970s when hundreds of thousands sought refuge in Bangladesh.

Between 1989 and 1991, an additional 250,000 fled when a military crackdown followed a popular uprising and Burma was renamed Myanmar. In 1992, Bangladesh and Myanmar agreed a repatriation deal that led to thousands of Rohingya returning to Rakhine state.

The latest Rohingya exodus to Bangladesh resumed in August 2017 following a military crackdown on the ethnic minority group.

According to the UN, by the end of 2020, a total of 866,457 Rohingya refugees had been registered at 34 camps in the Cox’s Bazar district of Bangladesh due to a joint initiative by Dhaka and the UNHCR.

“It’s very shocking news. We are upset, and there was diplomatic talk to send us back in the coming days, but the current situation in Myanmar is an obstacle to that,” Ro Yassin Abdumonab, a refugee, told Arab News.

He said that this was the “third time an attempt to repatriate the refugees had failed,” adding: “It seems our stay in Bangladesh has been prolonged. We strongly condemn the situation in Myanmar.”

Another refugee said that fate had avenged the Rohingya.

“Suu Kyi remained silent over the atrocities on the Rohingyas. Now she is detained by the army. I feel happy with her fate,” Joinab Bibi, from the Kutupalang camp, told Arab News.

However, the Bangladesh government expects Myanmar to uphold its democratic and constitutional processes for “a sustainable Rohingya repatriation as soon as possible.”

“As an immediate and friendly neighbor, we would like to see peace and stability in Myanmar. We have been persistent in developing mutually beneficial relations with Myanmar and working with Myanmar for the voluntary, safe and sustained repatriation of the Rohingya sheltered in Bangladesh. We expect these processes to continue,” a statement by Bangladesh’s Foreign Ministry said on Monday.

Experts are far from optimistic.

“The Myanmar military staged the atrocities against the Rohingya, and now they are in power. So, it’s anticipated that the repatriation talks may get stalled again,” Prof. Amena Mohsin, of the international relations department at Dhaka University, told Arab News.

“Bangladesh needs to continue its efforts on various diplomatic fields to exert more international pressure on Myanmar for a quick Rohingya repatriation,” she added.

Ambassador Touhid Hossain, former foreign secretary of Bangladesh, said that the country needs to “observe” a little more to have a clear understanding of the political situation in Myanmar.

“Earlier, the military was a part of the Myanmar government and had a very strong hold. Now they came forward again, and there is no curtain in between. Now we will have direct talks with the military authorities over the Rohingya repatriation issues,” Hossain told Arab News.

“I don’t think the shift in power in Myanmar will have much impact on the bilateral relationship with Bangladesh,” Hossain added.

These were the details of the news Rohingya fear delay in repatriation efforts after Myanmar coup for this day. We hope that we have succeeded by giving you the full details and information. To follow all our news, you can subscribe to the alerts system or to one of our different systems to provide you with all that is new.

PREV Heat, drought and wildfires during one of the warmest Julys on record: WMO
NEXT Portugal, France battle big forest fires as mercury soars