Caribbean – Freedom of expression in Cuba: a meeting between artists and authorities 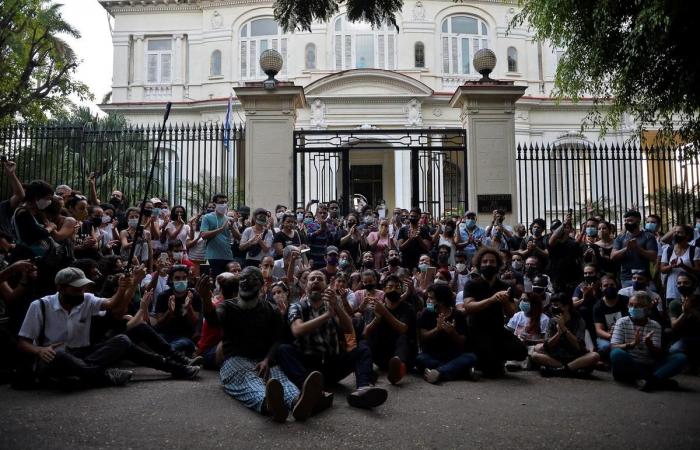 Two months after a historic mobilization of Cuban artists for more freedom of expression, a group of actors was received Tuesday by the Ministry of Culture, the last episode of an eventful cohabitation between culture and socialist revolution.

The nearly five-hour meeting brought together a commission of ten representatives, who came on behalf of 231 Cuban actors and actresses, and ministry officials.

The commission presented their request for the creation of a national association of actors of Cuba, in this country where the right of association is very limited and the unions of the various professions regulated by the State.

In principle, the ministry “has not closed the door” to this request, told AFP Reinier Diaz, a young actor who participated in the meeting, without wanting to give more details before all of his colleagues are informed.

This meeting comes two months after the unprecedented mobilization of more than 300 artists, gathered for about fifteen hours on November 27 in front of the Ministry of Culture to demand more freedom of expression. But the announcement that evening by the authorities of a dialogue with the artists has since given way to tensions.

The authorities, already bristling with the strengthening of the American embargo under the administration of Donald Trump, denounced an attempted disguised coup. It is “the last attempt that the + Trumpists + and the anticuban mafia (of Miami) could lead”, in their “unconventional war strategy to try to overthrow the revolution”, was carried away the president Miguel Diaz-Canel .

The road will be long”

For Maria Isabel Alfonso, an expert in Cuban culture at St Joseph’s College in New York, the government’s reaction is nothing new. And the same instruments of the past are used, such as “the act of repudiation”, which consists of gathering a crowd around a dissenter to insult and yell at him, or “the act of calling a mercenary any person who thinks differently, ”she explains. “House arrest, as an alternative to arrests, is also becoming common” against independent artists or journalists, also notes the academic.

The November 27 rally “was a political demonstration, but expressed in a poetic way, without violence, with songs, poems”, tells AFP Fernando Pérez, considered the greatest living Cuban filmmaker and who played today there are mediators between the two parties.

“These young people foreshadowed the Cuba that many Cubans dreamed of and still dream of,” assures the 76-year-old director. But “I am not deluding myself: mentalities do not change from one day to another, the road will be long”.

Behind this umpteenth conflict, a long history of clashes since Fidel Castro defined cultural policy in 1961 using this formula: “In the revolution, everything; against the revolution nothing ”. It was between 1971 and 1976 – the famous “gray five-year term” – that the outbursts were strongest. Under Soviet influence, a vast purge was then carried out in art and culture, excluding all those who did not meet the “parameters” set by the authorities: to be revolutionary and heterosexual.

Artists punished for “ideological problems” were usually sent to work in the fields or construction. Emblematic authors like José Lezama Lima and Virgilio Piñera have seen their works withdrawn from bookstores and deprogrammed from theaters. At least 23 poets were unable to publish during this five-year term, according to essayist Arturo Arango.

Maria Isabel Alfonso underlines “a paradox”: “In the same way that there has been support (from the authorities) for art and culture, groups of institutional, cultural and not just political power have dynamited them, in dictating what art should be in the context of the revolution ”.

The difference from the current conflict?

The mobilization, spontaneous and relayed via the internet, took the authorities by surprise, forced to sit down on November 27 at the dialogue table. “Young people have found in social networks a way to express themselves freely and faced with this fluid, lively and fashionable dynamic, communication media, static, are, not to say it in a defeatist way, clearly at a disadvantage, ”said Fernando Pérez.

“What is also new is the strong demand” from artists and intellectuals for “the legitimacy of independent creation, the end of police submission and respect for their rights”, notes Maria Isabel Alfonso: the authorities ” must stop penalizing those who think differently and open up a space for dialogue ”.

These were the details of the news Caribbean – Freedom of expression in Cuba: a meeting between artists and authorities for this day. We hope that we have succeeded by giving you the full details and information. To follow all our news, you can subscribe to the alerts system or to one of our different systems to provide you with all that is new.