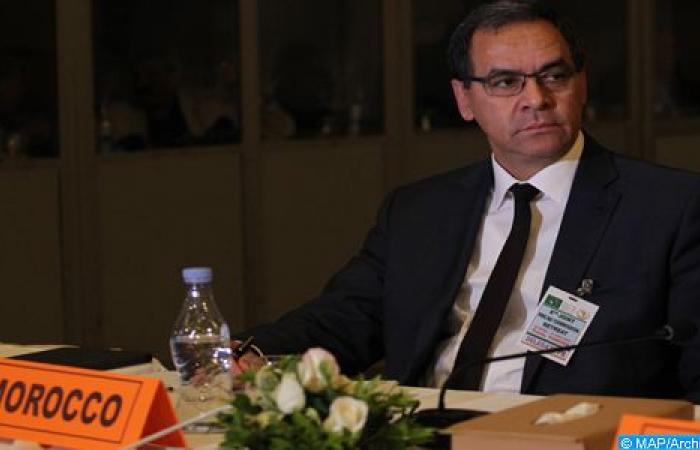 Addis Ababa – Morocco reiterated in Addis Ababa before the African Union its call for the creation of a Platform of African experts for the fight against epidemics in Africa.

The Ambassador Permanent Representative of Morocco to the African Union and the UNECA, Mohamed Arrouchi, who spoke Monday during the 41st session of the AU Representatives Committee which continued its work by videoconference, as a prelude to the AU next Summit (February 6 and 7), underlined the need for the creation of this platform in order to support the competent authorities of African countries in terms of advice in the fight against epidemics in Africa, and to allow a continuous exchange of expertise in order to consolidate intra-African cooperation.

This proposal is part of the pan-African institution’s efforts to strengthen African knowledge and expertise, as well as its autonomy in the field of medical products, equipment and logistics, noted Mr. Arrouchi who is leading the Moroccan delegation to the work of this session.

By proposing the creation of a platform of African experts for the fight against epidemics in Africa, Morocco reiterates the importance of the operational dimension within the framework of common African action to meet the legitimate aspirations of the African citizen, a Mr Arrouchi added.

In the same wake, the Moroccan delegation recalled the active solidarity of the Kingdom of Morocco under the leadership of His Majesty King Mohammed VI, may God assist Him, who had given His High instructions for the delivery of medical aid to the African Union Commission and several sister African countries, by providing medical products and equipment for the fight against the COVID-19 pandemic.

The Moroccan diplomat also took this opportunity to stress that all the products and equipment constituting aid were manufactured in Morocco, on African soil, by Africans.

To this end, he noted that this action constitutes a concrete example demonstrating that Africa can acquire its own expertise, in very specific fields, as soon as the opportunity and the opportunity present themselves.

In addition, the Ambassador Permanent Representative also called on the Commission to use its structures to strengthen Africa’s resilience in the fight against epidemics, in particular through the full and effective operationalization of the African Medicines Agency. , which will allow greater autonomy to the continent in the provision of medicines for all African citizens.

These were the details of the news Morocco reiterates in Addis Ababa its call for the creation of a Platform of African experts for the fight against epidemics for this day. We hope that we have succeeded by giving you the full details and information. To follow all our news, you can subscribe to the alerts system or to one of our different systems to provide you with all that is new.

PREV Monkeypox cases detected in Spain, Portugal and US
NEXT 25 persons emerge from shell-pounded steel complex in Mariupol