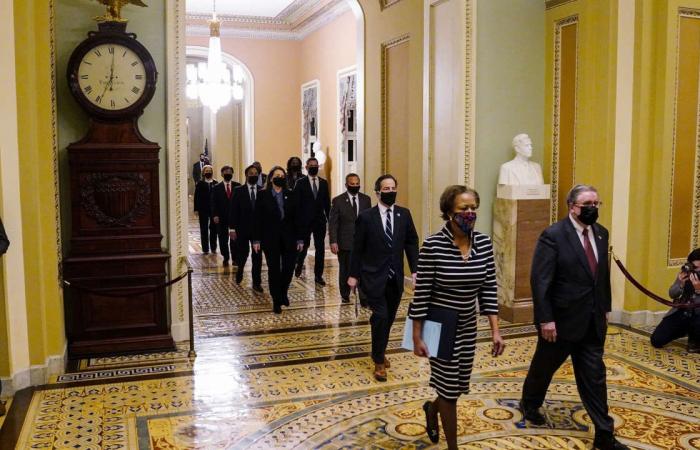 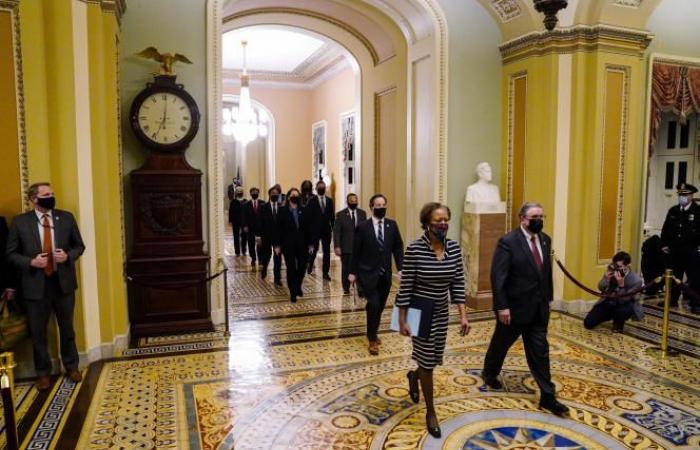 The elected democratic representatives “Prosecutors” in the “impeachment” proceedings against Donald Trump formally transmitted, Monday evening, January 25, his indictment to the US Senate, marking the official opening of the historic trial of the former president for “Incitement to insurgency”.

In solemn silence, the nine “Prosecutors” nominated by the Democratic Speaker of the House of Representatives, Nancy Pelosi, crossed, to the Senate, the same long corridors adorned with statues and paintings stormed by pro-Trump demonstrators during the deadly attack on the Capitol, January 6th.

Then their leader, Jamie Raskin, read the indictment to “Incitement to insurgency” in the chamber of the Senate, his words resounding with all the more force as all here, elected representatives of the Chamber and senators, were witnesses, and victims, of the violence. « Donald John Trump » prompted “To violence” and “Seriously endangered the security of the United States and its institutions” declared the elected Democrat, citing in particular his “False statements” denying the victory of his rival Joe Biden in the presidential election in November.

From Tuesday, the Senate will officially summon the former US president for this trial, which will not start until February 9, however. A delay that will allow Joe Biden to see more members of his cabinet confirmed by the Senate, before he is monopolized by this procedure.

Democratic Senator Patrick Leahy will preside over the trial, not Supreme Court Justice John Roberts. A traditional choice for the procedures for the dismissal of officials other than the President of the United States, said the senator, but which made some Republicans cringe.

Senators will be sworn in on Tuesday to become jurors in this doubly historic procedure: Democrats have taken control of the Senate in addition to the House. But their majority is extremely fragile: they occupy 50 seats in senators, against 50 for Republicans. In the event of a perfect tie in a vote, new Vice President Kamala Harris has the power to add her voice to tip the scales on the Democratic side.

They will need two-thirds of the Senate to condemn Donald Trump, or 17 Republican votes. A number that seems elusive, even if their influential leader, Mitch McConnell, has not ruled out voting for his conviction.

“I find this trial stupid. I think it will be counterproductive ”, for his part, thundered Republican Senator Marco Rubio Sunday on Fox. “

The country is already in flames and it is like pouring gasoline on this fire. “

Republican senators even consider it unconstitutional to judge a former president for impeachment, and are looking for a way to simply prevent the holding of the trial.

Few party senators nevertheless defend this procedure. “If we want this country to come together, it is important to recognize that responsibility, truth and justice are needed”Mitt Romney told Fox on Sunday, suggesting he could find the real estate mogul guilty.

These were the details of the news the indictment against Donald Trump formally sent to the Senate for this day. We hope that we have succeeded by giving you the full details and information. To follow all our news, you can subscribe to the alerts system or to one of our different systems to provide you with all that is new.