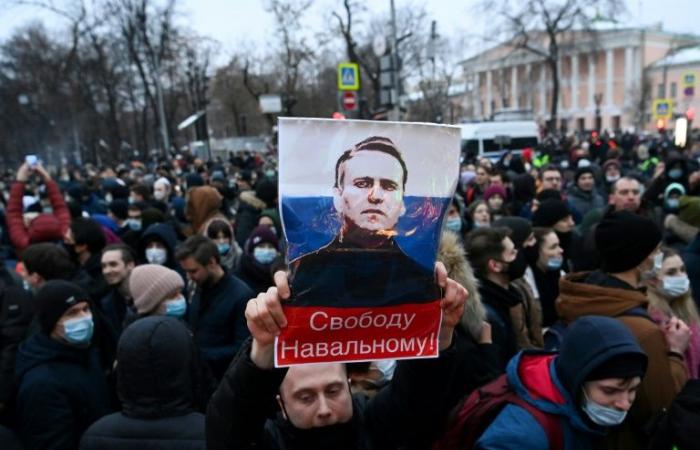 Crowds of demonstrators braving the ban and batons in a hundred cities in Russia. From the depths of his prison, the opponent Alexeï Navalny has won a bet, but his fight with the Kremlin promises to be long and above all very risky.

Double blow even for the number one detractor of Vladimir Putin, imprisoned since January 17 and his return to Russia after five months of convalescence due to suspected poisoning.

In addition to the tens of thousands of demonstrators gathered on Saturday, he can boast of having gathered 86 million views on YouTube in less than a week, accusing Mr. Putin of having built a sumptuous palace by the sea.

The Russian president himself, during a video conference with students, had to respond to the accusations of the one whose name he never mentioned.

“Nothing that is shown (in the film) to be my property belongs to me or my relatives,” he said on Monday.

The day before his spokesperson, Dmitri Peskov had already intervened on television to denounce an “elaborate lie” and call on those who watched the video “to plug their brains”.

As for the demonstrations, he downplayed their impact: “Few people came out, a lot of people vote for Putin”.

The protest movement is however far from trivial with the approach of the legislative elections of September on which Alexeï Navalny wants to influence, encouraged by the unpopularity of the party of the Kremlin, United Russia, deemed to be stiff and corrupt.

Leonid Volkov, a strategist of the opposition movement, hailed a “historic” Saturday of protests and called for a new national day of action on January 31.

For the political scientist of the Carnegie center in Moscow Andrei Kolesnikov, we must expect that “the demonstrations will continue”, as during the great protest movement of 2011-2012.

Especially since the scale, in number and geography, of the gatherings on Saturday is clearly “the result of Navalny’s return and his film on Putin’s palace”.

But the analyst warns against any “euphoria”. “

The regime has large resources to ensure its survival, including the indifference of a majority of the population,” he said.

Opponent Leonid Volkov readily admits that the battle will be “difficult”.

Already, the Russian judicial machine is on the move. More than 3,500 arrests took place during the demonstrations on Saturday, a record according to the specialized NGO OVD-Info. A first protester was sentenced Monday to 10 days in detention, according to the state agency TASS.

From Vladivostok to Saint Petersburg via the Urals and Moscow, criminal investigations have been launched for violence against the police, disturbing public order or damage. As many offenses and crimes punishable by prison.

The rain of snowballs targeting the Moscow riot police could cost the perpetrators dearly, if the gesture is qualified as an assault.

Alexeï Navalny risks for his part from February 2 several years in prison, accused of having violated a judicial control by seeking treatment abroad after his probable poisoning. However, he left for Germany in a coma, with Vladimir Putin’s blank check in person.

He is also the target of an investigation for fraud, punishable by 10 years of detention, and a libel trial awaits him on February 5.

As the mobilization was largely done online, the authorities are also increasing the pressure on platforms, TikTok in the lead because it is very popular with adolescents.

They try to present the supporters of Mr. Navalny, with the help of irresponsible social networks, as scoundrels manipulating “children” for political ends.

The powerful Investigation Committee, in charge of priority cases, opened an investigation for “inciting minors to participate in illegal activities likely to endanger their lives”.

Television, under the control of the Kremlin, is not to be outdone, in particular its major Sunday political show Vesti Nedeli.

“Navalny builds his propaganda in such a way that among his supporters there are many adolescents and children,” denounces presenter Dmitri Kissiliov, architect of the state media machine.

“Political pedophiles”, he even blurted out.

These were the details of the news Navalny scores points in high-risk Kremlin fight for this day. We hope that we have succeeded by giving you the full details and information. To follow all our news, you can subscribe to the alerts system or to one of our different systems to provide you with all that is new.