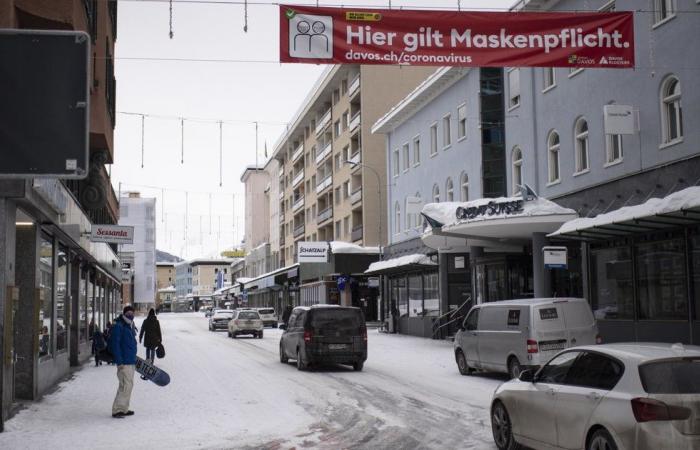 Switzerland has counted 4320 new cases coronavirus over the weekend, as well as 129 hospitalizations and 80 deaths.

After a slight slowdown in mid-January, the FOPH announced on Sunday a virus reproduction rate of 0.89 for January 14, dashing hopes of cutting the number of cases by half every two weeks.

The France begins a “critical week””, say several officials: since Monday, the tests are required at the borders (but not for the border), and many are those who evoke a reconfinement.

Switzerland has 4,320 additional cases of coronavirus on Monday in 72 hours, according to figures from the Federal Office of Public Health (OFSP). Eighty-five additional deaths are to be deplored and 129 patients have been hospitalized. These figures indicate a slight downward trend: a week ago, the number of cases recorded over the weekend stood at 4,703.

During the last 72 hours, the results of 55,071 tests have been transmitted, indicates the FOPH.

The reproduction rate, which has a delay of about ten days, is 0.93.

Since the start of the pandemic, 513,599 cases of Covid-19 contamination have been confirmed in the laboratory out of a total of 4,190,785 tests carried out in Switzerland and Liechtenstein.

The total of deaths stands at 8,430 and the number of people hospitalized reaches 21,358.

The country also counts 16,974 people in isolation and 26,072 individuals in their contacts have been quarantined. There are also 2,917 other people returning from a trip from a country at risk and who also had to go through the quarantine box.

■ Alain Berset does not see an immediate opening for cultural circles

Prolonged closure of cultural institutions, ban on cultural events: the measures intended to stem the pandemic planned until the end of February have hit the field of culture very hard, recognizes the Federal Office (OFC) for culture in a press release. Health Minister Alain Berset met virtually this Monday with representatives of cultural circles to discuss the situation.

The Federal Councilor welcomed the direct exchange between the cultural sector and representatives of the Confederation and the cantons. He recalled the commitment of state actors to combat the existential difficulties encountered by this sector in the most effective way possible. Unfortunately, it is not possible for the moment to give a clear perspective on the reopening of cultural institutions or the authorization of cultural events.

The Institut Pasteur has announced that it is halting the development of its main Covid-19 vaccine project, because the first tests have shown that it was less effective than hoped. Another French player, the Sanofi laboratory, announced in December that its vaccine was late and would not be ready until the end of 2021, due to less good results than expected.

■ Austria imposes the FFP2 mask in transport and shops

The Austrians swapped their fabric masks for FFP2 protections on Monday. These masks are now compulsory for people over 14 years old in transport, shops, places of service and doctor’s offices.

This is necessary because of the (more contagious) variants of the coronavirus, we must better protect ourselves. If everyone plays the game, I think it will change the situation, especially as the vaccines arrive

The implementation of this new measure, which remains uncommon in Europe, does not generate any real debate in the country. No doubt because “the regulation ensures that the masks are sold at cost price” (or 59 cents), comments another passerby.

■ In Hong Kong, a strong forties is controversial

Hong Kong ended Monday morning the confinement of a neighborhood, the first ordered by the authorities since the start of the pandemic, which took place in a tense climate.

Over the weekend, police were deployed to cordon off around 150 buildings in Jordan, one of Hong Kong’s poorest and densely populated neighborhoods, where outbreaks recently appeared. Officials went door to door to force residents to get tested. Of the approximately 7,000 tests performed, only 0.17% were positive for the new coronavirus.

Voices have been raised among political and economic leaders to denounce the way in which this containment has been implemented. But the authorities have justified its magnitude and have not ruled out other confinements of this type.

■ A class in quarantine in Geneva

This is a first in French-speaking Switzerland. A primary class from the Cressy school group, in the canton of Geneva, has been placed in quarantine. At least one of the students has indeed tested positive for the new British variant of Covid-19. Revealed on Sunday by the RTS, the information was confirmed on Monday by the Geneva authorities.

With the new variant, which is more contagious, the precautionary measures are stricter.

The goal is to prevent the spread of the mutant virus in the school, with ultimately the obligation to have to close the entire establishment, explained the spokesperson for the health department Laurent Paoliello. Several classes in German-speaking Switzerland have already been placed in quarantine due to the mutant virus, but so far none in French-speaking Switzerland.

In the canton of Friborg, the overall budget for aid for hardship cases linked to the pandemic amounts to 54 million francs, including 15 million from the cantonal contribution. This sum could climb to 77 million, if the Confederation allocates a 4th tranche, announces the Council of State, relayed by the ATS agency.

The criteria for the allocation of aid and compensation, which will be simplified, “are currently being drawn up and these new procedures will be operational in early February,” said the State on Monday.

The standard procedure will be intended for ordinary hardship cases, namely companies having suffered a decrease in turnover of at least 40% during the last 12 months preceding the request.

The streamlined procedure is intended for companies that had to close for more than 40 working days between November 1, 2020 and June 30, 2021.

Pregnant women at additional risk should be able to be vaccinated if they wish, announced this Monday Swiss Gynecology and the Federal Office of Public Health (OFSP).

“Initially, the FOPH announced that pregnant women could not be vaccinated. We have now reached an agreement so that those who present particular risks can be, ”said Daniel Surbek, member of the Swiss Gynecology Committee (SGGG) and chief clinical obstetrician at the hospital of the Island in Bern Monday on the airwaves of the German-speaking radio SRF.

■ Still spared so far, New Zealand reports a case of a mutant from South Africa

The first locally infected person in New Zealand in more than two months has the South African variant of the coronavirus, and transmission likely occurred during his quarantine, authorities said on Monday.

A 56-year-old woman who had recently returned from Europe tested positive on Saturday, 10 days after completing her mandatory two-week quarantine in solitary confinement.

New Zealand’s record in the fight against Covid-19 has been hailed abroad, with the archipelago totaling less than 2,000 cases since the start of the pandemic. In total, 25 deaths have been attributed to Covid-19 in this country.

The 56-year-old woman is the first person to be infected locally since mid-December, and she has a strain of the virus that is likely to be more contagious. She was allegedly infected during her quarantine by a person who was on the same floor as her and who tested positive two days before this woman finished her quarantine.

■ Guy Parmelin salutes the efforts of States and companies

The President of the Confederation calls for looking “beyond” the pandemic. Opening the World Economic Forum (WEF) online meeting on Sunday evening, Guy Parmelin called on political leaders, economic leaders and society to work towards sustainable growth “to avoid a new crisis”.

“We must prepare avenues for the period following the acute phase of the pandemic,” he said in his speech. Regardless of the coronavirus, significant challenges lie ahead for the international community, he says. From the economy to digitization through the strengthening of collaboration, so many questions that will be addressed until Friday by the participants in this WEF meeting.

According to Guy Parmelin, “the speed and effectiveness” of the efforts for vaccines have shown “what States, companies and scientific circles are capable of” when they unite.

Discussions through Friday are to prepare for the annual WEF meeting, postponed to May and held in Singapore due to the pandemic. Guy Parmelin regrets that this cannot take place in Davos as it does every year.

The return to Switzerland next year will show “that the acute phase of the crisis” will be over, he said.

These were the details of the news [En continu] Switzerland lists 4,320 more cases in 3 days, downward trend for this day. We hope that we have succeeded by giving you the full details and information. To follow all our news, you can subscribe to the alerts system or to one of our different systems to provide you with all that is new.