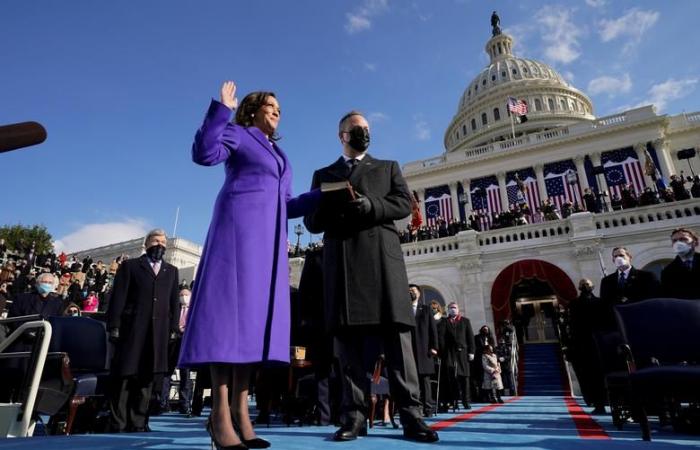 Harris, who was inaugurated as US President Joe Biden’s deputy last week, has been critical of the Indian government’s discriminatory policies toward the country’s Muslim minority and its annexation of Kashmir in 2019.

Herself of Indian descent, she called for international intervention “to remind Kashmiris that they are not alone in the world” soon after New Delhi revoked Kashmir’s special autonomous status and split it into two Union Territories in August 2019.

Her role in the US administration as well as the recent appointment into Biden’s team of Sameera Fazil and Aisha Shah — both of Kashmiri descent — have raised some cautious hope for change in the region.

“Kamala Harris has spoken openly on Kashmir. On that front, there is hope,” Srinagar-based political analyst and author of “Kashmir: Rage and Reason,” Gowhar Geelani, told Arab News on Sunday.

He added, however, that hope is “not equivalent to expectation.”

The analyst said that "while the people are upbeat that Modi’s ‘friend’ Trump has lost, as a symbolic victory, they also realize the new US administration will only speak about the restoration of civil liberties and put pressure on New Delhi to improve the situation of human rights in Kashmir,” adding: “But there won’t be much movement vis-a-vis political resolution of the dispute.”

Srinagar-based lawyer Deeba Ashraf also sees some hope, especially with regard to solving the Kashmiri issue between Pakistan and India, which both claim the territory in full but rule it in part.

“We have a bit of hope now. Biden has a positive approach towards everyone and he, being from a law background, can introspect in a better manner. He may pressure both countries for normalizing the situation in Kashmir,” she said.

Yet others, like Srinagar-based political analyst Prof. Siddiq Wahid, are more optimistic.

“The Biden administration will be much more assertive on Kashmir. This is because conventionally the Democratic Party has a more value-based understanding of democracy than the Republican Party or Trump,” he told Arab News

“There is no doubt that the Biden administration will be much more assertive on minority rights, particularly the present government’s heinous neglect of the systematic exclusion of minorities and even numerous lynching which are all for the record to see,” Wahid said.

India’s ruling Bharatiya Janata Party (BJP), however, does not expect much pressure from the US, like it did not experience any from the previous Donald Trump administration, with which Modi shared a special bond and was endorsing Trump’s reelection during the US presidential campaign last year.

“It does not make any difference whether Biden is here, or Trump was here,” BJP spokesman Sudesh Verma told Arab News on Saturday.

“India-US relations are built on the past experiences of two democracies functioning smoothly and for the benefit of the people of both the countries,” he said, adding the Biden administration should not “become the victim of the false propaganda which is unleashed by the NGOs and other such organizations which have vested interests.”

Experts also see little room for change as they cite strong and strategic ties between Washington and New Delhi.

He added: “No doubt Biden and Harris have strong opinions about some of the issues like minority rights and human rights violations in Kashmir, but these issues will not be defining features of the relationship between the two nations.”

“A country like the US is very clear when it comes to its national interests,” he said.

“They don’t bother about human rights and all. If they think that India is important for their own welfare, they will ignore minority and human rights concerns.”

These were the details of the news Hope in Kashmir as Modi critic Kamala Harris takes office for this day. We hope that we have succeeded by giving you the full details and information. To follow all our news, you can subscribe to the alerts system or to one of our different systems to provide you with all that is new.