China: US military in South China Sea not good for peace 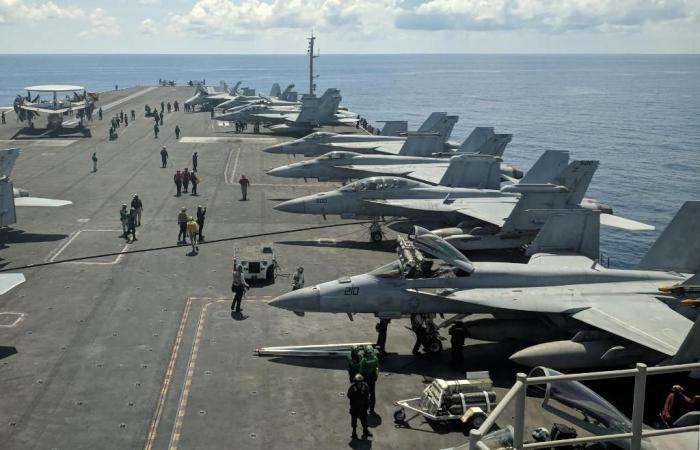 Thank you for reading the news about China: US military in South China Sea not good for peace and now with the details

Jeddah - Yasmine El Tohamy - WASHINGTON: US House Speaker Nancy Pelosi is set to send the Senate a single article of impeachment Monday accusing Donald Trump of inciting the Capitol riot, formally triggering the first-ever impeachment trial of a former president.
Pelosi, the top Democrat in Congress, vowed last week that the trial — already scheduled to open in the second week of February — should proceed, saying, “I don’t think it will be long, but we must do it.”
But Republican lawmakers signaled over the weekend that Democrats may struggle to secure Trump’s conviction over the storming of US legislative buildings earlier this month, which left five people dead.
Senior figures in Trump’s party have pushed back with both political and constitutional arguments, raising doubts that Democrats — who control 50 seats in the 100-seat chamber — can secure the 17 Republican votes to reach the two-thirds majority needed to convict.
“I think the trial is stupid. I think it’s counterproductive. We already have a flaming fire in this country and it’s like taking a bunch of gasoline and pouring it on top,” Marco Rubio, the top Republican on the Senate Intelligence Committee, told Fox News Sunday.
He acknowledged that Trump — who had urged thousands of his supporters to flock to Washington and protest the congressional certification of Joe Biden’s victory — “bears some responsibility for what happened.”
But to “stir it up again” could only hurt the country, said Rubio, a presidential candidate beaten by Trump in the 2016 primary.

Other Republicans argued that the Senate has no authority to put a private citizen — as Trump now is — on trial.
Senator Mike Rounds told NBC’s “Meet the Press” that the constitution does not allow for the impeachment of a former president.
But Senator Mitt Romney, the Republicans’ 2012 presidential candidate and a frequent Trump critic, told CNN that “the preponderance of legal opinion is that an impeachment trial after a president has left office is constitutional. I believe that’s the case.”
The Utah Republican — the only member of his party to vote to convict Trump in his first impeachment trial — hinted that he may be leaning the same way now.
He said he believed “that what is being alleged and what we saw, which is incitement to insurrection, is an impeachable offense. If not, what is?“
The Capitol riots were documented on videos seen around the world — as were Trump’s earlier exhortations to the crowd to “fight” for his presidency — complicating his defense.
His case may have suffered further after The New York Times reported Friday that Trump had considered ousting the US acting attorney general in favor of a low-ranking official receptive to his efforts to overturn the election result.

Biden has publicly taken a hands-off approach to the impeachment, eager to put Trump in the rear-view mirror and seek progress on fighting the coronavirus pandemic and reviving a devastated economy.
Biden spokeswoman Jen Psaki said that the president “believes that it’s up to the Senate and Congress to determine how they will hold the former president accountable.”
As Democrats worked to prepare the case against Trump, one of those who will present it in the Senate — Representative Madeleine Dean — said she hoped it would move quickly.
“I would expect it would go faster” than the 2020 impeachment trial, which lasted 21 days, she told CNN.
The trial, however, will be a test for senators: Democrats hope to devote part of each day to regular business, but the furies always surrounding Trump seem sure to undercut any bid for bipartisan cooperation.
Dean said she was in the House chamber during the “terrifying moment” when the invading mob began pounding on its doors, chanting: “Hang Vice President Pence.”
She said Democrats would demand accountability of Trump for “an extraordinarily heinous presidential crime.”
And Daniel Goldman, who was lead counsel for the House’s first impeachment inquiry, tweeted Sunday that “the only way to ensure this lawless, authoritarian, anti-democratic conduct never happens again is to hold him accountable.”
The House of Representatives impeached Trump for a historic second time on January 13, just one week before he left office.
The article of impeachment will be delivered and read out to the Senate on Monday at 7:00 p.m. (0000 GMT Tuesday). The chamber’s 100 members will be sworn in as trial jurors the next day.

These were the details of the news China: US military in South China Sea not good for peace for this day. We hope that we have succeeded by giving you the full details and information. To follow all our news, you can subscribe to the alerts system or to one of our different systems to provide you with all that is new.