the evolution of the virus at the center of scientific concerns 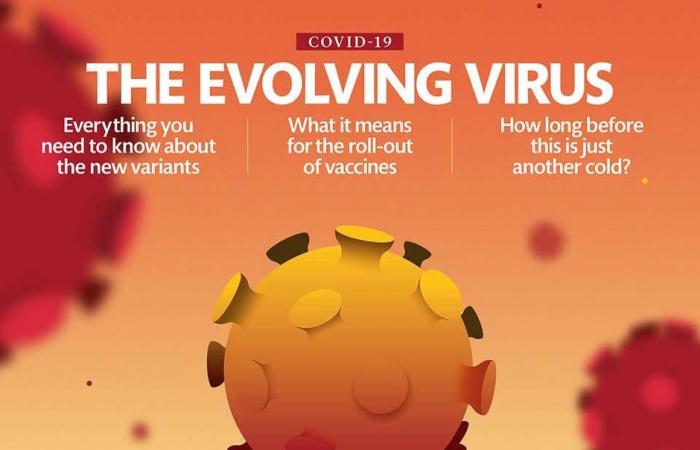 Following the discovery of three variants of Sars-CoV-2 in the United Kingdom, South Africa and Brazil, the New Scientist dated January 23, 2021 dedicates its front page to the many questions and challenges raised by mutations in the virus.

In the center of the front page, on an orange background that catches the eye, stands out the clearly identifiable drawing of a virus. It is to the one who is the object of all attention, responsible for the Covid-19, that the New Scientist this week devotes a dossier entitled “

In two first articles, the journal recalls that these mutations, if they did not surprise the scientific community, are subject to increased surveillance.

The researchers are particularly interested in determining to what extent the new variants could re-infect immunized people, thus rendering vaccines ineffective. If the results of studies on the three main variants are, at present, relatively reassuring on this subject, David Robertson, virologist at the University of Glasgow, warns, however: “It is imperative that we take surveillance very seriously [des mutations du Sars-CoV-2]”.

In the end, a simple cold?

The file of New Scientist also relays an optimistic evolution scenario, which echoes a study published on January 12, 2021 in the journal Science. It would indeed seem possible that the virus responsible for Covid-19 evolves to approximate the four endemic human coronary heart diseases which, themselves, only cause a simple cold. Marc Van Ranst, virologist at the University of Louvin, explains the reasons.

The goal of the virus is not to kill [ses hôtes] nor to make them sick. An effective virus is an inconspicuous and easily transmitted virus. ”

The weekly reports that “Most virologists find it credible” the scenario according to which Sars-CoV-2 could follow an evolutionary trajectory comparable to that of its four cousins.

In the event of such a development, recontamination would no longer be so problematic.

The New Scientist even explains that for one of the endemic coronaviruses, “Being recontaminated seems to have a doping effect on the immune system” in periodically reactivating the body’s ability to limit the violence of symptoms.

However, at present, it is impossible to predict when this scenario will materialize – if it does. Waiting, the weekly calls for caution and respect for sanitary instructions.

Stimulating, concerned about ecology and good popularizer, New Scientist is one of the best science news magazines in the world. Created in 1956, it achieves a third of its sales abroad. He is particularly interested in

These were the details of the news the evolution of the virus at the center of scientific concerns for this day. We hope that we have succeeded by giving you the full details and information. To follow all our news, you can subscribe to the alerts system or to one of our different systems to provide you with all that is new.