Dinosaur unearthed in Argentina may be biggest find – rts.ch 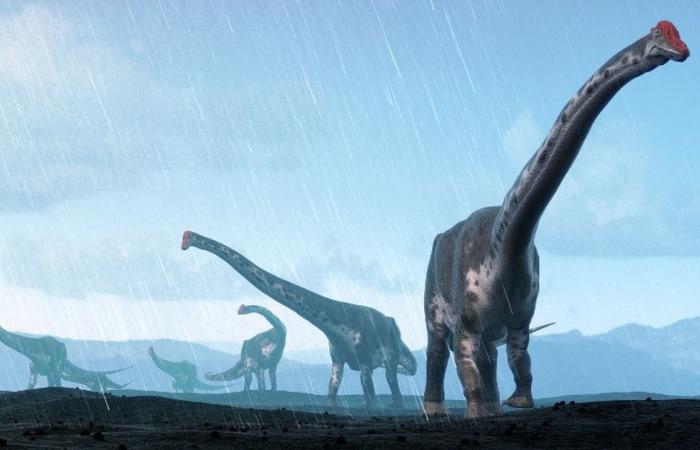 The skeleton is not complete but the first elements analyzed suggest that the fossil remains discovered in 2012 in southwest Argentina are those of the largest dinosaur ever unearthed, according to a study published Wednesday.

“What has been found so far are the first 24 vertebrae of the tail, elements of the pelvic girdle, the pectoral girdle,” said Alejandro Otero, lead author of the first paper on this titanosaur, a group of long-necked dinosaurs whose representatives are found on all continents, published in the scientific journal Cretaceous Research.

Alejandro Otero, however, explained that long bones such as the humerus or femur, which are traditionally used to make accurate estimates of body mass, had not been mined from the rock in which they are trapped.

But according to the first analyzes, the bones of this 98 million-year-old giant sauropod, dating from the Upper Cretaceous, would thus be “10 to 20% larger” than those of Patagotitan mayorum, the “Patagonian Titan”, the largest. dinosaur known to this day, explained the researcher to the Division of Vertebrate Paleontology of the Museum of La Plata (south), in a report published by the National University of La Matanza.

Discovered in 2017, also in Argentina, the Patagotitan mayorum weighed about 70 tons, or 10 African elephants, was about 40 meters long and had a very long neck.

The anatomical analysis carried out “does not currently allow us to consider it as a new species,” the researchers indicate in the report, “but the morphological disparity and the absence of equivalent elements compared to contemporary fossils also prevent us from attributing [les ossements] to genres already known, “they emphasize.

The specimen was located almost by chance in 2012 in the middle of the valley of the Neuquén River, the most important watercourse in Argentinian Patagonia, but excavation work did not begin until 2015.

A few more years of excavation

“It is a beautiful specimen, because it is practically articulated and we have more than half of the tail, a lot of hip bones. Now it is still mostly buried in rock and we still have some for a few more years. excavations, “said José Luis Carballido, researcher who had directed the studies on Patagotitan.

“We suspect that the specimen may be able to be extracted complete or nearly complete. It will all depend on how the excavation proceeds. But beyond whether it is the largest or not, whether an articulated dinosaur appears, a dinosaur of these dimensions is something extraordinary, ”rejoices Alberto Garrido, director of the Museum of Natural Sciences in Zapala, in the province of Neuquén.

These were the details of the news Dinosaur unearthed in Argentina may be biggest find – rts.ch for this day. We hope that we have succeeded by giving you the full details and information. To follow all our news, you can subscribe to the alerts system or to one of our different systems to provide you with all that is new.