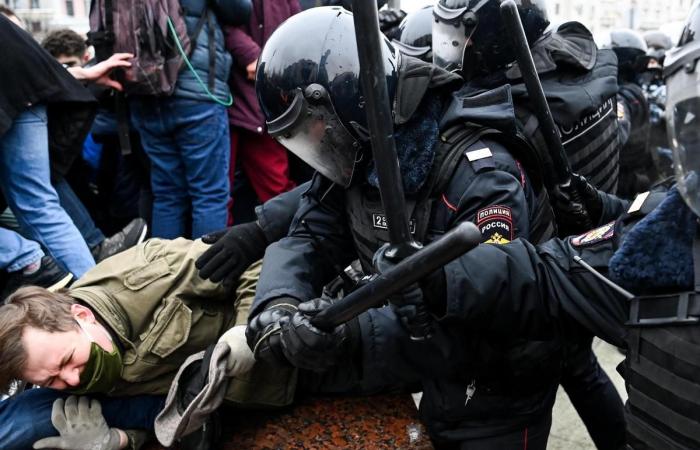 The call to protest launched by the dissident Alexeï Navalny at the same time as his astonishing investigation into Putin’s hidden palace, was heard… and repressed.

More than 3,300 protesters in total have been arrested during protests in Russia calling on opponent Alexei Navalny to demand his release, the non-governmental organization OVD Info reported on Sunday.

In Saint Petersburg, the country’s second city and homeland of President Vladimir Putin, an injured protester is in intensive care, AFP learned Sunday from a hospital source.

The crackdown on Saturday’s protests, in which tens of thousands of people demanded the opponent’s release, has been condemned by the European Union and the United States.

According to OVD Info, which specializes in monitoring opposition protests, police arrested at least 3,324 protesters during rallies that took place in dozens of cities, including 1,320 people arrested in Moscow and 490 in St. Petersburg.

This is the highest number of arrests during opposition protests in modern Russian history.

On Saturday evening, the Saint Petersburg prosecutor’s office said it was investigating violence, including “by the forces responsible for enforcing the law”.

The prosecution released its statement after local media broadcast a video showing a woman falling to the ground after being kicked by riot police.

The woman, identified as Margarita Youdina, asks three police officers in the video why they are arresting a young unarmed protester. One of the policemen then kicks him in the stomach. It is possibly this altercation.

Margarita Youdina was hospitalized on Saturday evening with a head injury, a representative of the Djanelidze hospital in Saint Petersburg told AFP on Sunday.

“She is in serious condition,” said the official, “she is in intensive care”.

Clashes occurred Saturday between police and demonstrators in several large cities as tens of thousands of people gathered across the country, chanting “Putin thief!” Navalny, we are with you! ” or “Freedom for political prisoners!”.

In Moscow on Saturday evening, hundreds of people joined the Matrosskaya Tichina prison where Alexeï Navalny is being held, in the north of the capital. Police made arrests there, beating protesters with batons and dispersing them.

Placed in pre-trial detention and targeted by several legal proceedings, Alexeï Navalny, 44, was arrested on January 17, upon his return from Germany, after five months of convalescence following an alleged poisoning of which he accuses the Kremlin.

His call to demonstrate was accompanied bya video survey, viewed more than 70 million times since Tuesday on YouTube, in which he accuses Vladimir Putin of having had a sumptuous private residence built on the shores of the Black Sea for a billion euros. A summary of this investigation by German public media Deutsche Welle can be viewed below:

The authorities dismiss all charges of poisoning and corruption, calling the opponent and his entourage “crooks”.

These were the details of the news Kremlin – Over 3,000 Russian opponents mobilized for Navalny arrested for this day. We hope that we have succeeded by giving you the full details and information. To follow all our news, you can subscribe to the alerts system or to one of our different systems to provide you with all that is new.