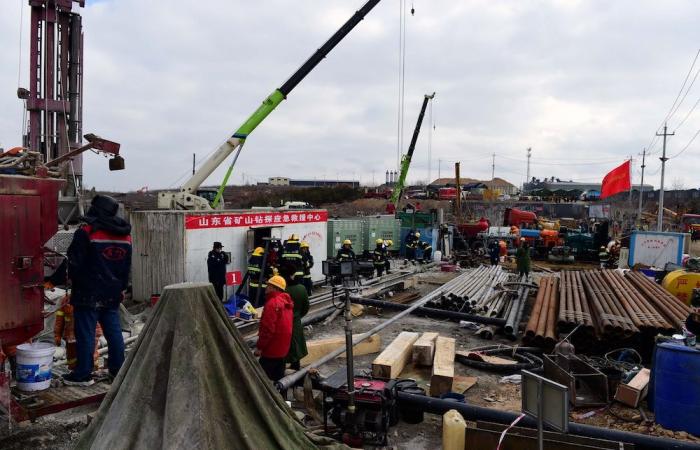 The first miner, brought to the surface at around 11am, was rushed to hospital in “extremely weak physical condition”, reported state broadcaster CCTV. He was discovered in a separate section of the mine to a group of ten the rescuers had previously contacted.

“The second batch of trapped miners were lifted out at 1.32pm — they were three of the ten workers trapped in the fifth middle section whom (rescuers) already contacted. One of them is injured,” reported CCTV.

A third group of three miners was brought out at around 2pm, CCTV reported.

Rescuers hope to save all ten miners in the first group today after the air ventilator shaft was cleared, the official state news agency Xinhua reported, citing the operation’s command centre.

Specialist teams have been battling difficult conditions to help the workers since an explosion at the Hushan mine in Shandong province sealed them underground amid rising waters on January 10.

The explosion occurred in the air ventilator shaft, causing a blockage that damaged the cable car that allowed miners to ascend.

State broadcaster footage today showed a small elevator carriage lifted to the surface by a huge drill, accompanied by rescue workers. A masked man, who appeared unable to stand, was carried out.

Contact was first established a week ago with a group of 11 miners trapped in a section of the mine around 580 metres (1,900 feet) below the surface.

One of them was seriously injured in the initial explosion and has been confirmed dead after suffering head injuries and falling into a coma.

Rescue teams have been lowering food, medicine and other supplies to the group through several “lifeline” shafts drilled into the rock.

State media reported on Friday that the trapped workers’ physical health is gradually returning to a “normal state” after regular deliveries of food.

Life detectors and nutrient solutions have been lowered to other parts of the mine to find the other missing miners.

A twelfth miner is believed to be trapped on his own, 100 metres further down in rising waters — but rescue teams have been unable to contact him.

For the other nine miners, hopes are dwindling as they have not been heard from since the explosion.

Official news agency Xinhua reported the miners have been trying to help search for the missing group using laser pointers and loudspeakers, but have received no reply.

Rescue workers said Friday it could take at least another two weeks to free the miners, citing a massive blockage that has delayed drilling efforts, according to state media.

These were the details of the news Rescue efforts for trapped Chinese miners speed up after seven saved for this day. We hope that we have succeeded by giving you the full details and information. To follow all our news, you can subscribe to the alerts system or to one of our different systems to provide you with all that is new.